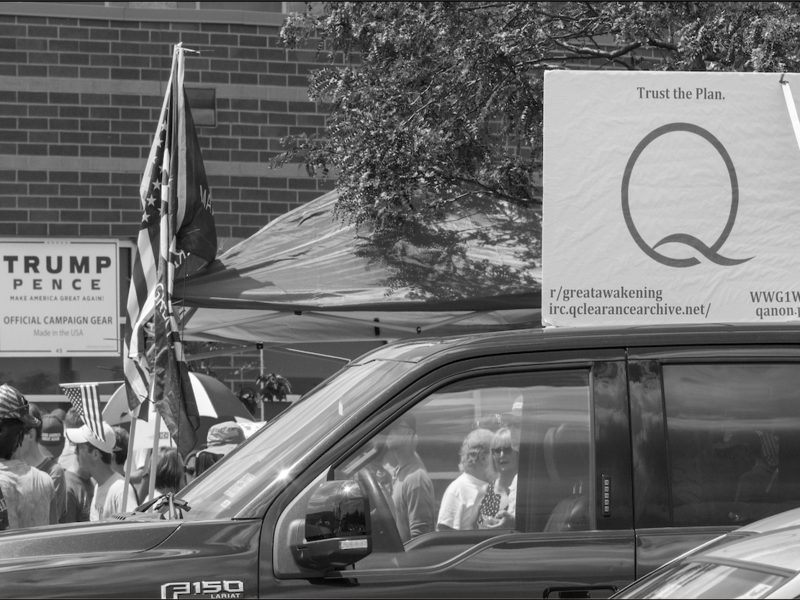 Conspiracy theories are not a new phenomenon. However, in today’s digital environment, their role and importance has drastically changed. While these movements were previously mainly confined to obscure and secluded forums of the Internet, they now proliferate and flourish anywhere from Twitter threads to subreddits where users gather to share their theories. The ubiquity of the Internet and the rise of social media lead to an acceleration of the information that enabled conspiracy theory groups to grow by spreading their ideas, turning what once were isolated movements into large communities of believers. Moreover, a crucial factor of the evolution of these movements has been the “crowd-sourcing” effect enabled by the Internet, which allows the followers themselves to contribute to the theories, expanding and shaping the narrative of these groups that are now sprawling into the offline world, most notably in the political sphere.

A particularly illustrative example of this phenomenon is QAnon, once a fringe movement recently gone mainstream by relaying a plethora of false information about Covid-19, Black Lives Matter protests and the upcoming presidential election.

But what exactly is QAnon, and where does it come from? The New York Times defines QAnon as the “umbrella term for a sprawling set of internet conspiracy theories that allege, falsely, that the world is run by a cabal of Satan-worshiping pedophiles who are plotting against Mr. Trump while operating a global child sex-trafficking ring.” It began in 2017 when an anonymous user referred to as “Q” started posting dark prophecies and mysterious riddles on 4chan, an anonymous forum notorious for being a toxic digital space where obscene memes and hoaxes emerge. Q predicted, wrongfully, the arrest of Hillary Clinton as well as a violent uprising in the United-States, and referred to sensitive affairs so that people would believe he was an intelligence officer or military official with Q clearance, an authorization granting access to top-secret data and restricted information.

From there, the mystery built itself. Conspiracy theorist profiles following Q’s initiative multiplied all over the Internet, from 4chan to 8chan to 8kun, adding their own speculations and expanding the ranks of devoted QAnon supporters, who are slowly becoming a political force in the United-States. More recently, QAnon has in fact made its way into American politics and the movement’s supporters are now “morphing from keyboard warriors into political candidates.”

On August 11th, Marjorie Taylor Greene, a Republican QAnon supporter, won her House primary runoff election in Georgia by about 15 percentage points. She recently declared that QAnon was “a once-in-a-lifetime opportunity to take this global cabal of Satan-worshiping pedophiles out.” Even though most Americans are not QAnon believers, the narrative and ideas relayed by the movement have become prominent in American politics, especially in Republican narratives.

Are conspiracy theorists a threat?

As conspiracy theories spread within the online and offline worlds, they are increasingly coming to be seen as a major threat to public safety. In a report from 2019, the FBI identified conspiracy theory groups as a domestic terrorist threat and warned about the actions these groups could support, perpetrate and legitimize on behalf of their beliefs. The agency assessed “anti-government, identity-based and fringe political conspiracy theories” as “very likely to motivate domestic extremists, wholly or in part, to commit criminal and sometimes violent activities” that could target specific people, institutions or places.

Beyond the threat they represent for domestic security, these large communities of conspiracy theorists can also represent a far more insidious threat because of their growing outreach among Americans and their importance in the political sphere. Nowadays, disinformation is an integral part of American politics and false statements are often used to undermine political opponents. A prime example of this idea is birtherism, a conspiracy theory questioning Barack Obama’s citizenship and religious beliefs in order to shatter his legitimacy as president, a movement for which Donald Trump appeared as a leading figure.

Even though the birthers’ claims were refuted on April 27, 2011, when the White House released Obama’s birth certificate, the myth persists amidst the right, especially among the Tea Party movement. “Being American now means we can believe in anything we want” seems to have become the motto of a lot of Americans evolving in a post-truth era that Kurt Andersen from The Atlantic also calls “Fantasyland,” which constitutes a blessing for politicians and populist leaders. The current US President, exalted as a savior by QAnon conspirators, rapidly captured the political interest of these communities.

The growing connection between conspiracy theories and politics is particularly well illustrated by the ties between QAnon and the GOP. Despite the Republican establishment’s attempts to dissociate itself from this group, the links between the conservative party and QAnon are tighter than ever as more Republicans express their support for the community. Some officials affiliated to the GOP, as well as more than ten Republican candidates running for Congress, including Marjorie Taylor Greene, have publicly endorsed the movement or used its narrative and symbols. Among them, Michael T. Flynn, the president’s first national security adviser, posted a video on Twitter on July 4th with the hashtag #TakeTheOath showing him and some members of his entourage reciting “where we go one, we go all,” a leitmotiv within the QAnon community now being used as a “digital soldier oath.” QAnon adherents are now part of the core electoral base of the Republican party which cannot necessarily afford to dispense itself from the votes and the funding of this group.

Donald Trump himself refuses to condemn or refute any of QAnon’s most delirious claims. It is hard to say if Trump’s implicit support to the movement is explained by his own beliefs or by a political strategy. Regardless of the reason for this bias, what truly matters is the president’s tolerance for false or misleading statements harmful to the nation, especially amidst a pandemic.