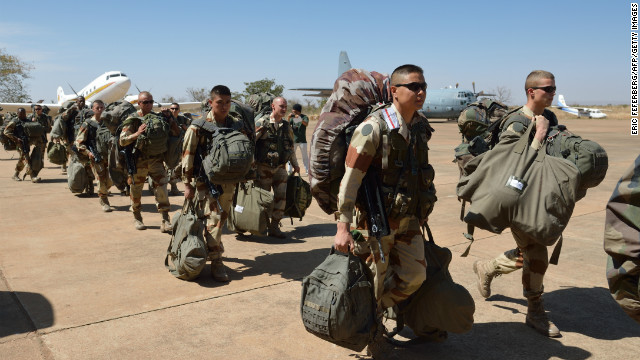 As the French and Chadian armed forces fight the remaining Islamic insurgents in the Adrar des Ifoghas badlands of Northern Mali, the world looks on to the nation’s future.  Islamic terrorists and Al-Qaeda, operating in a variety of splinter cells, are a very real threat to the Maghreb region―a threat that the rest of West Africa looks on with worry.  In this conflict, nevertheless, France has aided its former colony and temporarily neutralized an insurgency that has plagued Mali since independence. With the insurgents’ defeat looking more certain: What responsibility does France have for Mali’s future?

France has been instrumental in coming to the aid of the Malian people, but with regard to Mali’s future, but it must strike a careful balance between genuine development and the storm cloud of its colonial past.  With 4000 troops in Mali, France has waged a successful counter-insurgency campaign with minimal losses and proved that a modern conventional military can contain an asymmetric threat.  The French would be overstepping their role by orchestrating a complex political solution with necessary power-sharing arrangements. As a former colonial power, France bears some responsibility for the current mess in Mali.  The colonial state created an entrenched civil service without successfully incorporating the northern Tuareg community.

France should ensure that all dimensions of the adopted European Union Sahel Convention are met, including the security of the €660 million set out for Mali, Niger, and Chad by the European Development Fund.  By supporting regional partners, such as Economic Community of West African States (ECOWAS) and the African Union, France has the opportunity to set a positive “neo-colonial” example, one where the people of Mali, with regional help, control their own future.

Moreover, France has the responsibility to respect Mali’s sovereignty as a country with a challenging post-colonial history. It should assist the Malian government in enhancing its democratic process and properly train and equip the Malian police and security forces to ensure safer elections.  If these forces can prevent random public attacks, such as the suicide bombing on February 22 in Khalil, cities and villages of the north will be able to re-populate their communities, welcoming back some of the 446 000 residents that have fled the area.  France has a challenging course ahead in Mali, but it is has the opportunity to make a substantial and lasting impact.

Mali is a huge and ethnically diverse country rich in gold.  Approximately 9.7 million people can be divided into five or six separate ethno-linguistic groupings with several smaller groups, all under the umbrella of several dozen languages.  Socio-economically, the country is divided by the townsfolk, farmers, and villagers in the south, with scattered communities of nomadic pastoralists in the north. Living in the north are the Tuareg who make up less than 10% of Mali’s overall population, but are concentrated in larger numbers in the Sahel Desert. The Tuareg feel historically connected to the desert area, in a region that cuts across the borders of Mali, Algeria, Niger, and Burkina Faso.

Creating an inclusive, singular concept of a nation is extremely challenging, particularly if there are significant histories of violence between communities.  What exactly defines, in our case, the Malian nation?  Creating one will be an essential part of Mali’s political, economic, and social healing.  What incentives do the Tuareg people feel to be part a greater Malian nation?  If they, as a whole, are written off as wild bandits engaging in a desire for an autonomous Islamic desert utopia, how can they ever be included in the government at Bamako?

It will be important to re-define the Malian nation to include a broader view of what currently exists.  Some commentators have observed a great cultural imagination among many Malians: that of the great Malian empire that flourished at the beginning of the 14th century, stretching westwards to modern Gambia and covering 1 million square kilometers. Known as Manden Kurufaba or “the great entirety”, the empire included the Tuareg people, who were transporters of salt to all regions. Through trading this “gold of the north”, the Tuareg have held an important position in Mali spanning several hundred years.

Asking for a new cultural imagination in one of the poorest regions on earth might seem like a luxury above basic living necessities, but it may go a long way to affecting “hearts and minds.”Nelson Mandela’s concept of the “rainbow nation” for South Africa did not resolve insidious post-Apartheid fault lines, but it did bring a consistent message of inclusion and hope to a racially wounded nation.

In order to make any cultural re-imagining a reality, the Malian army must not take out their revenge on Tuareg communities.  Atrocities have already been committed, but every care must be taken to stop these.  The government must seek to create legitimate community partnerships with respected leaders.  The emphasis should be on building consensus on important issues and bridging ethnic differences.

Mali can serve as a beacon of light for Africa, a nation with the ability to heal after intense post-colonial insurgency.  Convincing Bamako’s entrenched elite of change, however, is another story.  As a possible solution, the government should engage foreign technocrats and bureaucrats from nearby countries, such as Nigeria, who have no regional allegiances within Mali, and who are only interested in a stable and efficient government.  A portion of the ECOWAS development budget for the region can go directly to pay these people to limit corruption. By disrupting the political elite’s hold on decision-making, more grievances will be addressed and vital aid can be distributed properly.  The solutions for Mali, in all cases, must be African solutions.  Too much meddling from France, Europe, or the West will risk Mali’s chances of a brighter future.

The Sci-Fi Century: War in the Twenty-First

Tim Feller on the character of 21st century conflict.

Guerillas of the Mist: The Character of Asymmetric Warfare