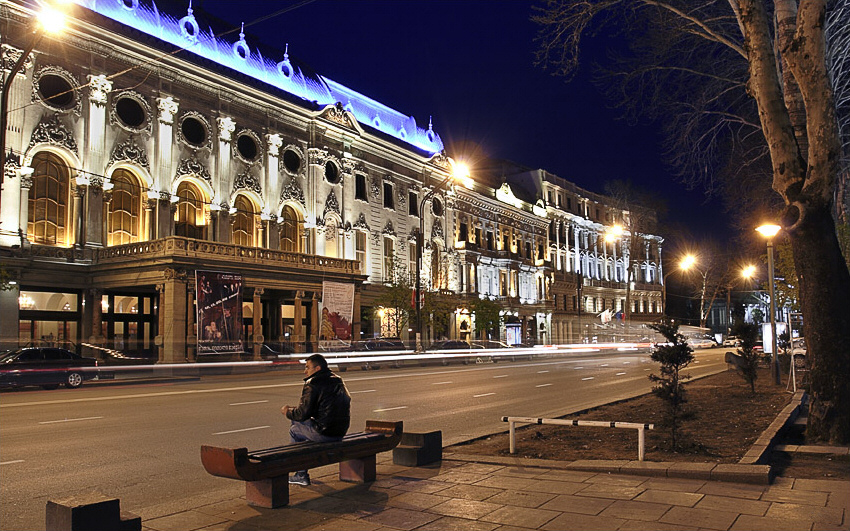 George Khelashvili, the Deputy Chief of Mission at the Embassy of Georgia in Washington DC, sits back in his armchair as he contemplates Georgia’s tumultuous path towards democracy. Since it proclaimed independence from the Soviet Union in 1991, Georgia’s story has been riddled with internal and external challenges alike, including challenges to territorial integrity, with 20% of Georgia’s territory currently occupied. There have been bumps on the road to democratic consolidation, with the Rose Revolution in 2003 heralding in a new era of cooperation with the West.

Khelashvili continues. “NATO was clearly the guiding star for Georgia’s foreign policy and independence, already back in 1989. And that is why Georgia was one of the first nations to join the Partnership for Peace in 1994, even as it was in conditions of turmoil.”

Alluding to the turbulent years of conflict that saw war erupt in South Ossetia in 1991 and in Abkhazia in 1992, Khelashvili is grave. He stresses the importance of going back to the events of those years — not just to the infamous Russo-Georgian war of 2008 — to understand Georgia’s security situation and the relationship between Georgia and its two Russian-occupied territories, South Ossetia and Abkhazia. “Our security predicament didn’t start in 2008, it started 20 years before. 2008 sadly was just one episode in a very long struggle for our independence. Few people paid attention to the events in South Ossetia and Abkhazia in the 1990s, as Soviet special services started brewing up trouble in Sukhumi and in Tskhinvali.”

“In 1990, the Ossetians were holding the Soviet Union alive in this tiny part of the world. But by then it was impossible for the Ossetian people to believe in the shiny future of communism.” Khelashvili elaborates. “It was something else that drove them, and we know what that something else was: complete interference by the KGB, and the special services, and Soviet armed forces, and the Communist Party.” In many ways, Georgia’s story is the same as other post-Soviet countries: Russia has capitalized on stirring up nationalist sentiment in separatist areas supporting them militarily to sow disunity among its newly democratic neighbours, all the while denying its own national minorities the same demands for autonomy.

The conflicts led to massive displacements of South Ossetia and Abkazia’s residents. Many South Ossetians fled to North Ossetia, and Georgians were expelled en masse from the occupied territories. As a result, a whole generation of internally displaced persons has grown up as refugees who have been unable to return to their lost homes. In total, since 1991 around 250,000 people have been displaced.

With Russia recognizing South Ossetia and Abkhazia as independent states on August 25, the 2008 Russo-Georgian War had the effect of relegating Georgia’s NATO aspirations to an ambiguous limbo. Only months before, the Alliance had declared that Georgia would one day become part of NATO at the Bucharest Summit, in April. With its territorial integrity compromised, however, any promise of membership, or a much-desired Membership Action Plan (MAP), has been off the table for Georgia since 2008 — exactly what Russia wanted out of the short summer war.

Despite these challenges, Khelashvili remains hopeful that Georgia’s dreams for NATO membership will one day be fulfilled. “We hope that the occupation of Georgian territories will not be an insurmountable obstacle towards membership in NATO.” Pausing, he continues. “Let us remember that NATO overcame much more difficult challenges in its history: namely, divided Germany, and later the secession of the Baltic States from the Soviet Union and them joining NATO.”

Indeed, while Georgia is at the moment not formally being considered for membership in NATO, it remains one of the Alliance’s most steadfast partners, particularly in its mission to Afghanistan where Georgia is the largest non-NATO contributor. NATO has ramped up its operations in Georgia in recent years, conducting the large-scale Noble Partner drills outside Tbilisi only a month ago. These drills were conducted with the participation of 1,300 Georgian, American, and British troops. However, whether NATO membership will become a reality over the next few years remains to be seen.

Probing into the delicate dance between Georgia and NATO, and the conditions Georgia must fulfill to be granted membership, Khelashvili is frank. “It is all about political context. You can improve indefinitely. Were some member states when they joined NATO more ready than Georgia is now? Probably not. It’s incorrect to speak about any fixed benchmarks that we haven’t met. Sometimes, Georgians bemoan the absence of benchmarks. Joining NATO has sometimes felt like a moving target.”

In terms of democratic reforms, military preparedness, and political and judicial transparency, Georgia has made tremendous progress towards joining the Alliance in the past few years. Signing an Association Agreement with the EU in 2014, and being offered a Substantial NATO-Georgia Package at the Wales Summit in 2014, Georgia has made it abundantly clear that it wants to be part of the West.

Next, we turn to the current state of affairs between Georgia and the occupied territories, and between Georgia and Russia. Inquiring into Tbilisi’s relationship with Tskhinvali and Sukhumi, Khelashvili emphasizes, “with the Abkhaz and Ossetian populations, we really hope that we will find a common language. It is important to foster relations with our brotherly nations, to have more contact, to engage in discussion and dialogue. Even if this means quarrelling about the past, and about the future, we have to discuss it. Every possible forum worldwide is exploited.” When I ask about Russia’s role in the negotiations, Khelashvili speaks plainly. “If you see where Russian troops are situated, and where the barbed wires are drawn, you will see exactly how they feel about this dialogue. They do not engage.” Russia and Georgia have had no diplomatic relations since Russia recognized South Ossetia and Abkhazia in 2008.

The South Ossetian and Abkazian government are both under tremendous pressure from Moscow, both economically, politically, and militarily. The latest example of this is perhaps the South Ossetian government’s proposal to hold a referendum on constitutional change that would open it up to one day joining Russia. When I ask Khelashvili about the Crimea-style referendum, he replies, “It is an unfortunate development, in complete and gross violation of the letter and spirit of international law.”

Khelashvili explains the conflicted relations between Moscow and Sukhumi as the natural outcome of a relationship between oppressor and oppressed. “When a great nation unlawfully imposes its will on a small nation to subdue its choices, this is what you get. The Abkhaz population is under direct control from Moscow, and they have to endure many demeaning impositions from Moscow.”

Mr. Khelashvili’s last remarks leave us with a message of hope. “With South Ossetia and Abkhazia, and our aspirations to join NATO, much larger things are at stake than just rational calculations. If you get back to the roots of NATO, it is something much bigger than a defensive and military alliance. It is an alliance of values. This is what Georgia evokes in the context of NATO. To us, being part of the West is about feeling free. Feeling dignified. Having no oppressors, either inside or outside. This is what we were striving toward when the Soviet Union reached its demise — it was our freedom agenda, if you will. These were the values that attracted people and that finally defeated the austere Soviet totalitarian system. And we hope that we can show our brothers in South Ossetia and Abkhazia that this is the future. What we each consciously or subconsciously understand, is that we need to be part of the security community to fulfill our aspirations for freedom.”

George Khelashvili serves as Deputy Chief of Mission at Embassy of Georgia to the United States. He joined the Foreign Ministry in 1997 as a policy analyst at the Center for Foreign Policy Research and Analysis. Afterwards, George was Assistant Professor of International Relations and Research Director of the Center for Social Sciences at Tbilisi State University. He completed his doctoral thesis on U.S. policy toward Georgia at the University of Oxford. Before the current appointment, he served as deputy director of the Political Department of the Foreign Ministry of Georgia.