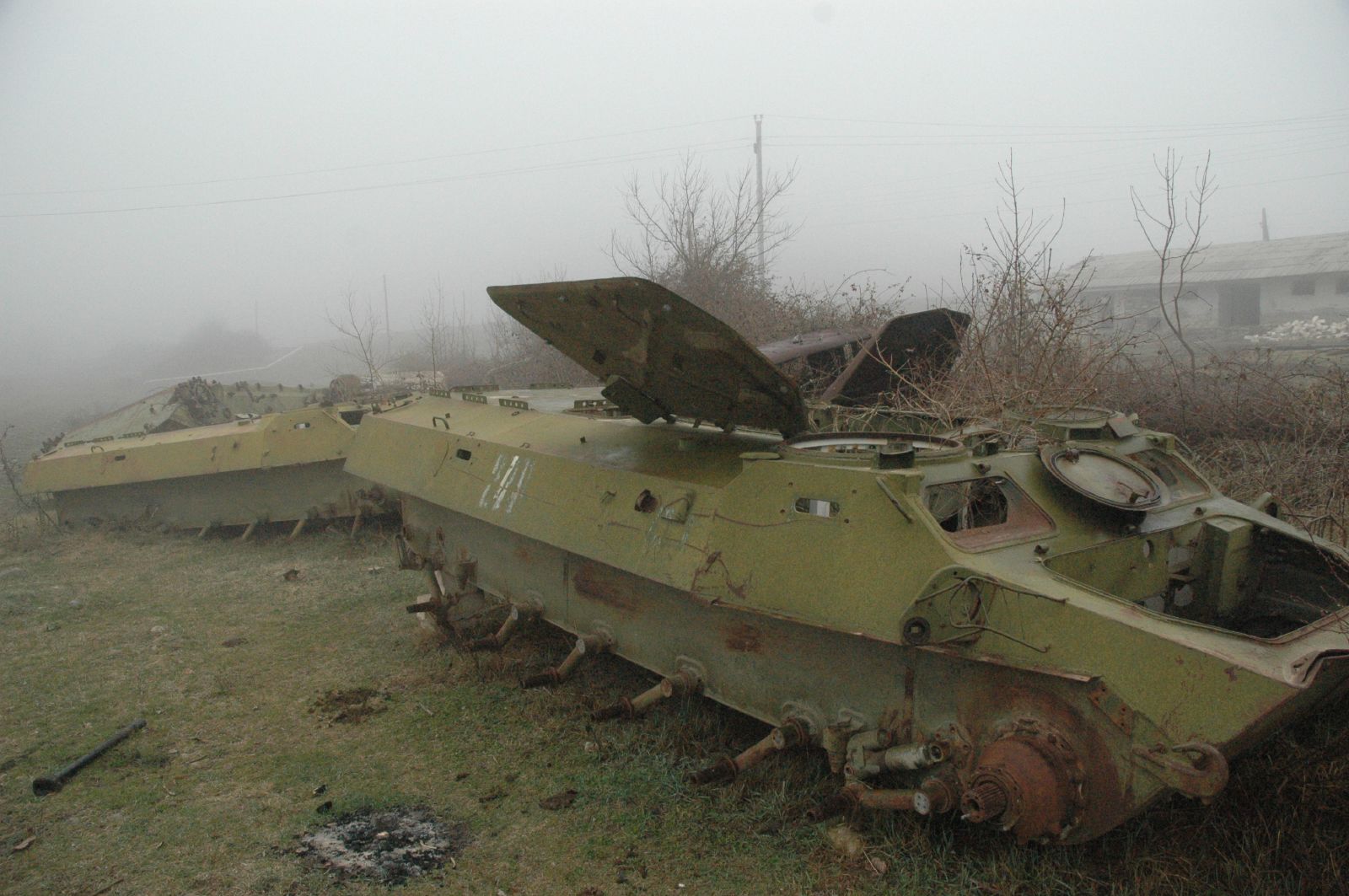 These are places with tangled histories, whose identities are shaped through the prism of conflict. The land and people tell the story of sometimes violent, and always fragile, relationships with both the great and small powers that surround them.

In Nagorno-Karabakh, the uneasy lull between eruptions of violence is never long. This obscure mountainous region lies at the heart of Armenia and Azerbaijan’s decades-long schism that has brought them to the brink of war, and over it, several times since they established themselves as independent states in the aftermath of the Soviet Union’s collapse. Both have nurtured national narratives that have Nagorno-Karabakh at their centre. In this narrative, Armenia is painted as an aggressor, depriving Azerbaijanis of their rightful claim to their nation’s heartland, and vice versa.

The international community recognizes Nagorno-Karabakh as being part of Azerbaijan, albeit occupied by Armenia. In 2008, the UN General Assembly adopted a resolution calling for “the immediate, complete and unconditional withdrawal of all Armenian forces from all occupied territories of the Republic of Azerbaijan.” The EU and NATO have also called for Azerbaijan’s territorial integrity to be restored and its sovereignty respected.

While Armenia doesn’t recognize Nagorno-Karabakh as an independent state —nor does any other country — it is its main financial and military backer. In these efforts Armenia is helped considerably by Russia, on whom it is dependent for its trade, energy and defense needs. As a landlocked country with terrible relations with two of its most significant neighbours, Azerbaijan and Turkey, Armenia is extremely isolated, both diplomatically and economically.

The origin of the conflict can be traced back to the Soviet Union’s divide-and-conquer strategy in the 1920s. This was a time when the Bolsheviks were consolidating their power after World War I, having seized power in the vacuum left by the Tsarist regime in 1917. Occupying most of the South Caucasus, they drew territorial boundaries in such a way that they often crossed ethnic lines, thus undermining the political unity of the Soviet Union’s smaller republics. Thus, while the Bolsheviks originally promised Nagorno-Karabakh to Armenia, in 1923 Joseph Stalin awarded the majority Armenian territory to Azerbaijan as an autonomous region.

In 1988, as the Soviet Union started to fall apart, violent conflict erupted as Nagorno Karabakh’s local Soviet parliament voted to join Armenia and secede from the Soviet Socialist Republic of Azerbaijan. Escalating into full-scale war in 1992, the war claimed 30,000 lives and led to the displacement of hundreds of thousands of people, both in Karabakh and adjacent regions. Almost all 43,000 Azeris who lived in Nagorno-Karabakh as of 1989, making up a quarter of the population, with Armenians constituting the rest, fled the region during the conflict. To this day, almost no Azeris remain in Nagorno-Karabakh nor in Armenia, and the majority of Azerbaijan’s sizeable Armenian minority were likewise forced to leave. Rigid ethnic boundaries were drawn to replace the relative heterogeneity that existed during past generations.

Ethnic Armenians retained control of 14% of Azerbaijan’s territory by the time a Russian-brokered ceasefire ended the war in 1994. With the Organization for Security and Cooperation in Europe (OSCE) setting up the Minsk Group to attempt to find a long-term solution to the conflict following the ceasefire, their mandate so far as international mediators has largely failed: there is no lasting peaceful resolution of the issue so far. Nor has the Minsk Group, in the absence of an effective peacekeeping force, been able to prevent numerous ceasefire violations since the war officially ended in 1994. The Azerbaijan-Karabakh border remains extremely volatile.

Co-chaired by Russia, France, and the United States, the Minsk Group has been a rare point of agreement between Russia and the West, despite the slow progress being made in the negotiations. Matthew Bryza, the former US ambassador to Azerbaijan and the American representative at the negotiation table, has characterized his Russian counter-part at the Minsk Group as “always constructive.” Juxtaposing this with the intense disagreement between Russia and the United States over the 2008 Russo-Georgian War, Bryza stated, “Our cooperation on Nagorno-Karabakh was as intense as our enmity regarding Georgia.”

These constructive negotiations are deteriorating, however. Between April 2 and 5, 2016, the deadliest confrontation since 1994 erupted in Nagorno-Karabakh, leaving about 50 people dead. Both sides blame the other for initiating the conflict. In the wake of these hostilities, the cooperation between Russia, the US and France has receded to the sidelines. Instead, Moscow has used it as an opportunity to go it alone and side-step the Minsk Group process. Putin has been busy consulting with Armenian President Serzh Sarkisian and his Azerbaijani counterpart Ilham Aliyev to broker a peace agreement, leaving them with the impression that in the South Caucasus, it’s Russia that now calls the shots.

In the meantime, there have been few diplomatic efforts on the American side, with no official statement issued by the White House concerning the recent outbreak of hostilities. Ambassador Bryza has called this indifference “benign neglect.” This turn of events sets a worrying precedent for the future: it is more important now than ever that Russia and the West engage in constructive, respectful negotiations in areas that are of vital strategic importance to both. During a time of unprecedentedly turbulent relations, the Minsk Group process is a space where Russia and the West have in the past found rare common ground, and where they should seek to normalize their increasingly strained relations. Not doing so could entangle, not only Azerbaijan and Armenia, but also Russia, Turkey, and Iran into a larger regional war.