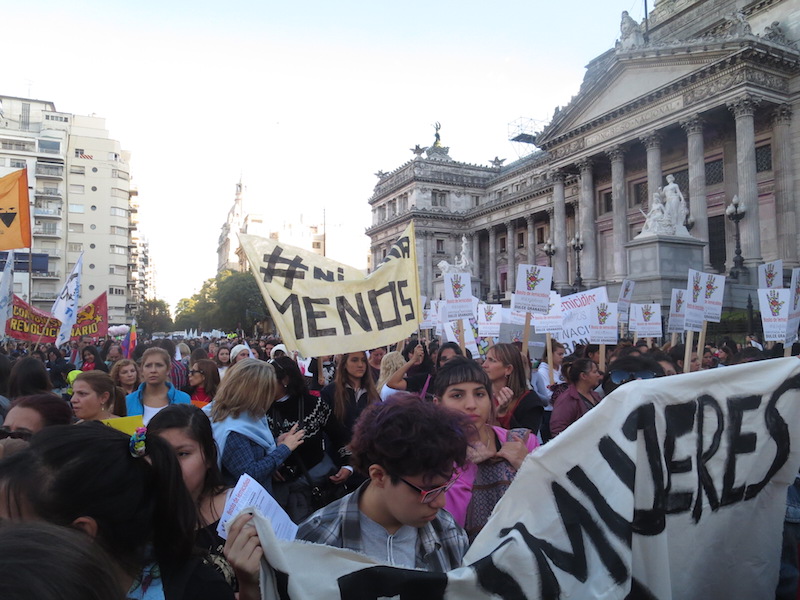 In Argentina, every 37 hours, a woman falls victim to gender-based violence. In an attempt to mitigate the cycle of systemic violence against women, Argentinian President Mauricio Macri has revealed a comprehensive national plan to address violence against women in July 27, 2016 press conference. This announcement comes after a year full of protests and demonstrations across the country.

Despite Argentina’s adoption of Law 26.485 on the Protection of Women in 2009, gender-based violence remains pervasive.

The plan was introduced after the violent femicide, or gender-based murder, of Chia Paez, a 14-year-old girl found buried in the backyard of her 16-year old boyfriend Manuel, who killed Paez after she told him she was pregnant. Reports claim that the autopsy found, “she died from beatings to the head, face and body…[and] traces of a drug used in abortions.”

Unfortunately, Paez was only 1 of 235 women killed in gender-based violence attacks in Argentina.

Her death sparked the “Ni Una Menos” (Not one Less) campaign, which brought together politicians, journalists, artists, and civil society to protest against femicide and advocate for reforms such as a revised sex education program, domestic violence protection, and challenging the culturally engrained stigma of machismo within South America that reinforces the systemic violence.

The reform entitled, “National Action Plan for the Prevention, Support, and Eradication of Violence Against Women (2017-2019),” is a 150-page document that outlines specific measures to combat gender-based violence. Rooted in the pillars of “prevention, via educational programmes to change cultural patterns that permit violence against women, and support, through more effective systems and networks,” the plan names 206 individual measures to combat violence against women.

Argentina, like many South American states, also suffers from a severe lack of women’s health programs within their healthcare institutions. Abortion is illegal in Argentina, barring two exemptions: the pregnant woman’s health is at risk or if the pregnancy was a result of the rape of a mentally disabled woman. Nonetheless, 500,000 illegal abortions are performed each year, which represents 40% of all pregnancies per year.

Abortion isn’t the only women’s health issue ignored in Argentina. Women are faced with barriers such as, “long delays in providing services, unnecessary referrals to other clinics, demands for spousal permission contrary to law, financial barriers, and in some cases outright denial of care.” Neglecting to enforce a comprehensive healthcare strategy and failing to investigate medical practitioners that arbitrarily deny women service shows the discrepancy between the rhetoric of the law and reality of lived experiences.

By introducing these gender-based violence laws without addressing women’s healthcare concerns, Argentina has created an “illusion of care”. While the laws have perhaps been evolving to represent women’s issues within government, there have been minimal effective implementation strategies to combat institutional sexism in Argentina.

And this is not to say that passing the National Plan is a misstep, but gender-based violence and women’s health, cannot continue to be dealt with as mutually exclusive issues. Women need both dependable healthcare throughout their lives, and the freedom to live without fear of persecution based on gender.

The way in which Macri’s policies aim at stopping gender-based violence, doesn’t address the core issue at hand. When sexism is ingrained within state institutions, legislation isn’t enough. It goes hand in hand with implementation strategies—something that Argentina has struggled with for years, while trying to end gender-based violence.

Argentina isn’t the only South American country to struggle with addressing gender-based violence. Women in Brazil have been pushing towards reform to stop the rampant femicide. After the 2015 video of a violent gang rape involving a 16-year old girl in Rio de Janeiro was spread, then-president Dilma Rousseff signed a new law that raised the penalty on killing women and girls.

However, like Argentina, Brazil’s healthcare system reflects a strong culture of sexism. In Brazil, abortion is illegal except in cases where it poses a danger to a woman’s life, or in certain cases, as a result of rape. These parallels drawn between gender-based violence policy reform and women’s healthcare access, can be seen across South America.

Although it’s often convenient to separate gender based violence and women’s healthcare into two disparate categories, it is neither constructive nor effective to ignore their interconnectedness. In a region where sexism has seeped into the foundations of major institutions, ignorance cannot be bliss. Women should not have to sacrifice safety for healthcare.

The foundations of South American gendered policies are broken and insufficient. To fill in the cracks, concrete change must challenge the institutional norms and practices of how women’s issues are valued within society.