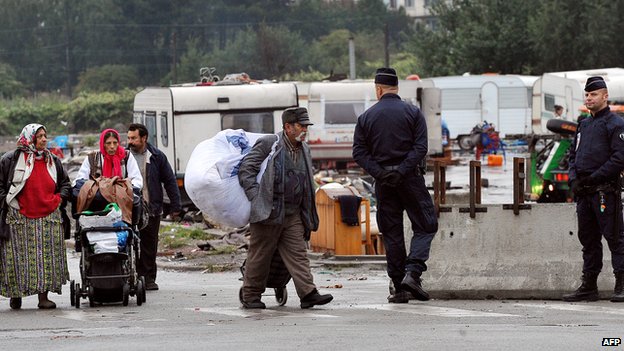 On June 13, 2014, a Roma boy was taken from his home, a camp in Pierrefitte-sur-Seine outside of Paris, and locked in cellar where he was violently beaten. The boy, who had previously been accused of local burglaries, had been living with his family in the camp for several months.

According to the BBC, “France has possibly the harshest policy in Europe towards Roma immigrants.” French authorities have repeatedly tried to close down these temporary camps. In 2009, more than 10,000 Roma were sent back to Romania and Bulgaria. The European Committee of Social Rights found that, when treating the Roma, France violated the European Social Charterwith respect to rights to housing, rights to protection against poverty and social exclusion, and rights of the family to protection.

As a result of these deportations, riots and attacks broke out in 2010 between French authorities and French Roma, resulting in two deaths. In response, the French president at the time, Nicolas Sarkozy, made a speech in Grenoble concerning the recent events, both in Grenoble and in St. Aignan. He spoke out against these confrontations and explained that half of the residents of these 539 illegal Roma camps would leave France within the year. Sarkozy has been noted for saying that these camps are “sources of illegal trafficking, of profoundly shocking living standards, of exploitation of children for begging, of prostitution and crime.”

On August 19, 2010, the first group of 79 Roma left France to Romania, followed by 290 within the next week. Within a month the French government had expelled 700 Roma, and closed 51 camps. The French government insists the Roma left voluntarily, but their only alternative would have been forcible eviction. They were offered a resettlement compensation of 300 euros for each adult and 100 euros for each child.

These expulsions continued into 2011 with the new government of François Hollande. In August 2012, this new French government continued to dismantle Roma camps and to expel the Roma residents. According to French officials, these evictions were justified due to the unsanitary conditions and tensions arising from these conditions from the surrounding working class neighborhoods. According to the European Roma Rights Centre (ERRC), 19,300 Roma were evicted across France in total in 2013.

The most significant problem for the French government developing from these deportations is the likely return of these Roma into France. In 2009, approximately 10,000 Roma were expelled from France to Romania. Almost all those expelled returned several weeks later. As a result, the French government has started to fingerprint the currently and more recently expelled Roma to ensure that they cannot return.

Those that oppose these expulsions and evictions believe France violated the individual right to freedom of movement of the citizens of Romania and Bulgaria, which are both member states of the EU. On August 18, 2010, the EU Commission for Justice, Fundamental Rights and Citizenship maintained that EU citizens have these rights within France, and announced that it would monitor the expulsion procedures. The United Nations Committee on the Elimination of Racial Discrimination has also claimed these expulsions as signs of racism and xenophobia within France, since opinion polls conducted in France indicated that the majority of the population approved the expulsion and eviction procedures. On September 6, 2010, the President of the EU Commission gave a speech that can be interpreted as a criticism of this French Roma policy and maintained that there is no place for racism and xenophobia in EU governments.

The French government claimed that they have not violated these rights because an individual who resided in a state for more than three months and cannot provide evidence of sufficient means to stay, either through employment or education, may be expelled. The French government maintained that this policy of expulsion and eviction was not being aimed at the Roma population only, but at all migrants not meeting EU and French residency laws, and that all were being treated equally.

Although the Roma policy in France can be characterized as harsh, Hollande has condemned the attacks calling them “unspeakable and unjustifiable.” The expulsion and eviction policies have still continued, and residents of the boy’s camp fled within hours following the attack.