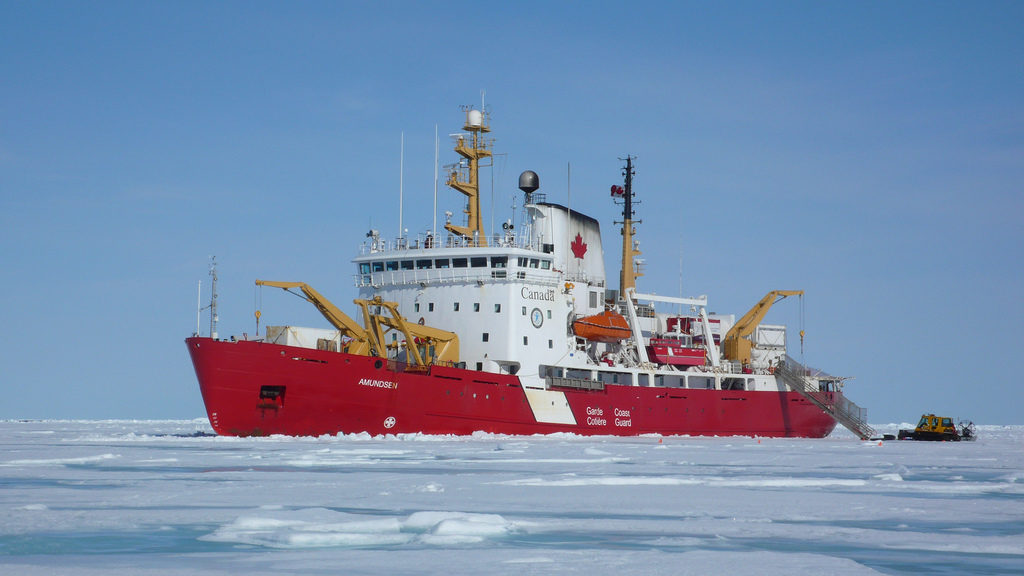 Canada’s Northern Strategy was introduced under the government of Prime Minister Stephen Harper in 2009. Whether the newly elected Liberal government will seek to overhaul this document remains to be seen. Thus far, Prime Minister Justin Trudeau has placed some importance on relationship-building with northern communities, such as meeting in Ottawa with the Inuit Tapiriit Kanatami, (ITK), which represents Canada’s Inuit, and inviting its leadership to speak at the lead-up to the First Ministers’ Meeting to be held in March 2016. But he has not yet announced plans to venture to Iqaluit and beyond.

If there is to be a new Northern Strategy, it should see an expanded role and increased resources for the Canadian Coast Guard (CCG). Following the closure of the Marine Communications and Traffic Service Centre (MCTSC) in Inuvik, Northwest Territories in 2012, the sole permanent Coast Guard presence in the Arctic is an MCTSC in Iqaluit. Canada’s two largest icebreakers – CCGS Terry Fox and CCGS Louis S. St-Laurent – are based in St. John’s, Newfoundland along with two other Arctic icebreakers, CCGS Henry Larsen and CCGS Pierre Radisson. However, this location results in slower response times, especially with regard to icebreaking in the eastern Hudson Bay, and has begun to have an impact on scientific expeditions and commercial shipping. Basing future icebreakers in Churchill, Manitoba or Iqaluit could significantly improve the efficiency of icebreaking and shorten response times in case of vessel collisions or other maritime incidents.

It is also unclear how the Canadian Coast Guard would respond to a maritime incident in the Beaufort Sea region. Traffic along the northern coastline of Yukon Territory and the Northwest Territories would have to await a response from Coast Guard assets located as far south as Vancouver Island, where the smaller icebreaker CCGS Sir Wilfrid Laurier is based, or else a request for assistance would have to be directed to the United States Coast Guard (USCG). There could be some shuffling of assets related to the Western Arctic once CCGS John G. Diefenbaker joins Canada’s icebreaker fleet. But that $1.3-billion vessel is still at the design stage and is not expected to be fully operational until 2022.

Beyond the lack of Arctic bases and the aging of Canada’s icebreaker fleet, there is also the question of operational culture. Although the CCG has always been a ‘special operating agency’ that reports to the Department of Fisheries and Oceans, it has to some degree experienced a period of militarization. The National Shipbuilding Procurement Strategy, originally launched in 2010, called for the construction of CCGS John G. Diefenbaker alongside plans for new combat vessels to modernize the Royal Canadian Navy. In 2012, Defence Minister Peter MacKay discussed the possibility of arming CCG vessels, though no further steps were taken. Making the CCG an explicit part of Hunter Tootoo’s mandate in the new government – Minister of Fisheries, Oceans, and the Canadian Coast Guard – suggests a renewed emphasis of this institution’s status as a law enforcement agency rather than a quasi-military body.

In any case, the Americans face similar challenges in the Arctic. The largest USCG base is at Kodiak Island, which is located on the southern coast of Alaska near the Aleutian Range. USCG vessels operating from Base Support Unit Kodiak could respond quickly to an incident along existing shipping lanes near the Bering Sea but would need days or even weeks to reach the site of a ship collision or oil spill in the Chukchi Sea or Beaufort Sea. The US Army Corps of Engineers has been investigating the suitability of other Alaskan communities, specifically Nome or Port Clarence, as possible sites for a deepwater port. Located much further north along the Alaskan coast – jutting out into the Bering Strait in fact – either location would significantly cut down USCG response times in the Chukchi Sea. Port Clarence is already home to a small USCG presence: a 4,500 foot long paved runway capable of accommodating search-and-rescue (SAR) aircraft. But until a deepwater port is established within range of the Chukchi Sea, the US capacity to exert sovereignty in the Arctic will be severely limited.

Just as the USCG and CCG share basing issues, funding for new icebreakers has been tied up in the US Congress for years. After USCGC Polar Sea suffered an engine casualty in June 2010, the US has only the heavy polar icebreaker USCGC Polar Star and the medium polar icebreaker USCGC Healy at its disposal. Although Polar Star was refurbished and re-entered service in December 2012, this is only expected to extend the vessel’s service life until approximately December 2022. Following a visit to Alaska in September 2015, President Barack Obama renewed calls for Congress to free up the funding necessary for new icebreakers to be built.

In light of this, an assertive role for the CCG in the newly established Arctic Coast Guard Forum – comprised of Coast Guard officials from Canada, Denmark, Finland, Iceland, Norway, the Russian Federation, Sweden, and the United States – will help ensure that Canada retains the strategic initiative in the Arctic. Though the enforcement of Canadian sovereignty in the region has suffered setbacks, it seems American plans have also stalled.