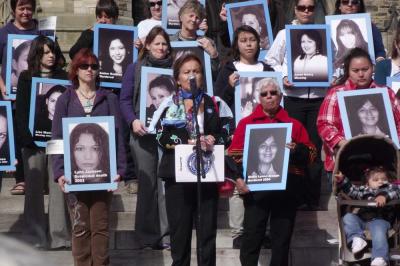 Canada’s dedication to human rights has been a symbol of pride for many Canadians. As a leader in human rights, the country played a prominent role in multiple humanitarian interventions during the 1990’s. Yet on a national front, these noble efforts have greatly masked Canada’s poor commitment to protecting the basic rights of its own First Nations peoples.  A reality of which has led to particularly adverse effects for Aboriginal women, who experience disproportionately higher levels of violence than their female counterparts.

The Legacy of Structural Violence

We are all burdened by our pasts.  For Canada, that past has meant the oppression of Indigenous identity and values throughout history that continues to discolor present attitudes and policies toward the protection of these minorities. The living conditions of Aboriginal communities in Canada illustrates ongoing structural issues in Canada that are causing economic disparities in the country’s citizenry.

Aboriginals live in high concentrations on reserves. These designated areas are reserved areas of land for Aboriginal communities, where they govern with autonomy. Typically, reserves have political structures that are run by Band members to govern these areas. Indian and Northern Affairs Canada is the main branch of the federal government that possesses jurisdiction over reserves, unlike other communities in Canada, which are regulated provincially. The Indian Act restricts the Canadian government’s jurisdictional authority over some reserves. Furthermore, Canada has 18 self-governing agreements involving 32 Aboriginal communities. These agreements further limit the Federal government’s jurisdiction in regards to administering Aboriginal affairs. The Federal department of Indian and Northern Affairs Canada (INAC) administers the disbursement of money to band councils, social service programs, and educational programs. Band administration is responsible for daily functions, such as the redistribution of resources within their band. Therefore, the poor conditions on reserves are not solely the result of a lack of political will.

The reasons for the conditions on reserves are complex and often debated. It is often highlighted that structural violence and discriminatory policies have perpetuated a system where First Nations in Canada are subject to poverty and injustice. Services available to Canadians who do not reside on reserves are of much higher quality than the services provided on reserves. Aboriginal groups are in need of the most basic necessities, such as safe drinking water, and adequate housing and schools to help these marginalized groups transgress the cycle of poverty and violence.

First Nations in Canada have been the victims of human rights violations since the early days of colonialism. Inadequate Canadian policies to correct past injustices has resulted in brewing prejudice against Aboriginal communities.  As a result of these failings, Aboriginal groups are extremely vulnerable. Aboriginal women in particular are facing enormous challenges, lacking access to the same standards of life as other Canadian women.

Effects of Underdevelopment for Aboriginal Women

Statistics Canada highlights that many factors account for elevated levels of violence among Aboriginal communities. These include breakdown of a healthy family structure as a consequence of residential school upbringing, ongoing racism and prejudice against First Nations communities, legacies of colonialism, as well as substandard and overcrowded housing. This cumulative trauma sustained by First Nations populations has led to repetitive cycles of inter-generational abuse.

Despite these facts, services for First Nations remain grossly inadequate. In January 2011, the Alberta Council of Women’s Shelters released a report highlighting that the 6 On-Reserve Women Shelters received $2.2 million dollars less in the 2010-2011 fiscal year from INAC (Indian and Northern Affairs Canada) than they would have received had they been provincially funded like other women’s shelters. As a result, these shelters have fewer services available to Aboriginal women fleeing domestic violence.

Aboriginal women are also 7 times more likely to die from violent acts. As of October 2012, there were 580 cases reported of missing and murdered Indigenous women in Canada. The province of Saskatchewan is the only province to document rates of missing women with consideration of their Indigenous status, which has made it difficult for Indigenous rights groups to quantify the level of structural violence that Aboriginals face in Canada. In 2007 it was determined that 60% of the long-term cases of missing women in the province of Saskatchewan were Aboriginal, despite making up only 6% of the population.

International rights groups, such as Amnesty International, have voiced their opposition to Canada’s mistreatment and belligerence against this vulnerable minority. Amnesty International maintains that the Canadian government’s lack of commitment to Indigenous access to justice leads some male perpetrators to believe that they can “get away with violent acts of hatred against [Aboriginal women].” Perpetrators rightly assume that justice is much less likely to be carried out if their victim is Indigenous.

Canada’s refusal to dedicate essential resources to correct past injustices which have marginalized Aboriginal populations is perpetuating Canada’s First Nations impoverishment. Inequalities in living conditions and limited access to government services have created a situation where many indigenous women are forced into deplorable situations, including overcrowding living situations and prostitution. This has dramatically increased their vulnerability to becoming victims of violence.

How Can Canada Improve the Plight of Aboriginal Women?

The best way to resolve the structural violence that plagues Canadian society is to address systemic inequalities. A comprehensive national action plan is needed to ensure that Aboriginal women have access to justice. Access to justice would minimize their vulnerability because it would give them an avenue for recourse. Significant attention should also be given to empowering Aboriginal women and improving their economic status in Canada so that they are more capable of utilizing these recourse avenues.

The action plan should include: firstly, eliminating bias within the police and court systems through training on historical inequalities and cultural awareness. Secondly, providing local programs on violence and women empowerment for First Nations, on and off reserves. On the reserves, these should be locally driven and culturally relevant, aided by Federal funding and support. Finally, it is most important that the federal government dedicates adequate resources to education on reserves and towards establishing its own accountability to the quality of service being delivered without violating its commitment to devolution. What is needed today is a concerted effort to achieve positive results focusing on health, education and access to justice leading to a better tomorrow for the First Nations of Canada.