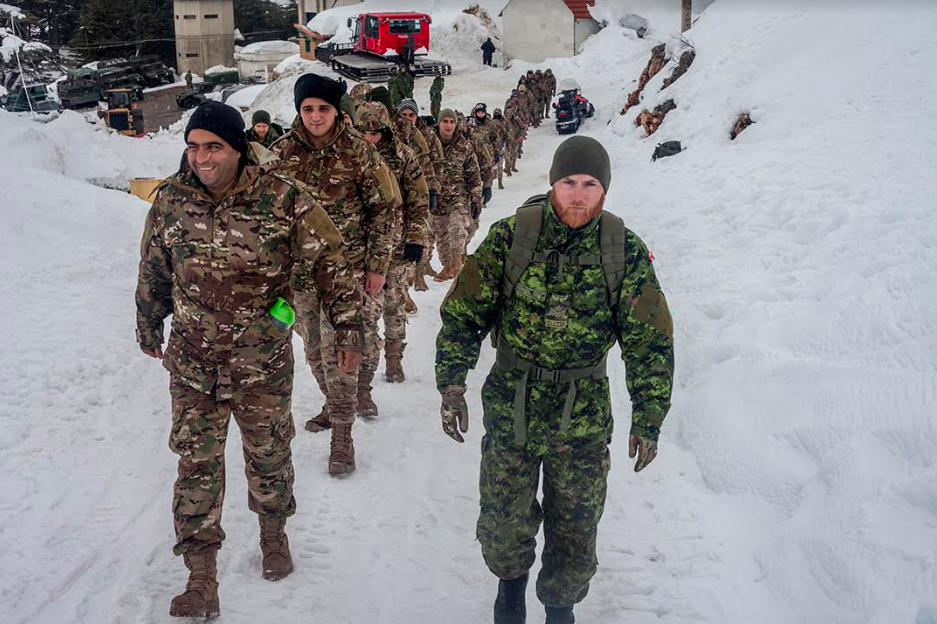 Photos are of Lebanese Armed Forces Land Border Regiment Soldiers being instructed in winter survival and shelter construction, winter-related first aid and casualty evacuation, basic dismounted reconnaissance skills, snowmobile driving, and maintenance, and of course – hockey! All instructors in these photos are 31 Canadian Brigade Group. Additional instructors for the advanced training package came from the R22eR, and are not pictured here due to conditions of their employment. Pictures by Captain Mike Wonnacott.

Captain Mike Wonnacott joined the Canadian Armed Forces as an Infantry Reserve Officer in 2009 with the Argyll and Sutherland Highlanders. He has a Bachelor of Fine Arts in Film Studies from Ryerson University, and works civilian side as a storyboard artist and sometimes other roles within the film industry in Toronto. As a sub-part to Operation IMPACT, Captain Wonnacott was deployed to Lebanon from January – March 2019 as the ‘team lead’ for The Canadian Training Assistance Team – Lebanon (CTAT-L). Farzin Bakhtiar, a Program Editor for the NATO Association had the opportunity to conduct an interview with Captain Wonnacott to highlight the importance of CTAT-L within the broader NATO nexus.

Editor: What was your specific role in CTAT-L? How does that fall under Operation Impact?

Captain Wonnacott: I was the “team lead” for the winter training technical assistance visit (TAV) for CTAT-L. My job was to coordinate and supervise two basic winter training packages being delivered mostly by reservists from 31 Brigade, and also an advanced winter training program for the Lebanese Ranger Regiments (their special forces) which was delivered by senior NCOs with backgrounds in Advanced reconnaissance and advanced mountain operations.

Editor: What would you say is the primary goal of CTAT-L?

Captain Wonnacott: That’s a question that probably should be asked at a higher level in order to appropriately convey the purpose of the CTAT-L mission. CAF presence in Lebanon is part of a greater strategic relationship that aims to address security and economic development interests. Our primary goal as a TAV was focused on partner capacity building – giving them tools based on our training and experience to increase their ability to operate in winter environments, as well as to conduct of dismounted patrolling.

Editor: What was the most challenging aspect of the Operation?

Captain Wonnacott: The instructors were required to deliver sometimes complex pieces of information to the LAF (Lebanese Armed Forces) with limited language capacity between them.

Editor: How effective would you say the training program has been so far? How are the improvements being measured?

Captain Wonnacott: We represented the second iteration of the training of this type. Our focus was to conduct more hands-on training and give them confidence in the ability to operate in the cold weather environment. Given the timeline since delivering training (there’s no winter there right now), it would be difficult to assess empirically the success of the training. We did, however, receive positive feedback from many soldiers and officers during the conduct of the training, and at subsequent meetings, I was a party to at the Lebanese Ministry of Defence we were informed that the response was very positive.

Editor: As CTAT-L is focused solely on Lebanon, is it different from the training missions in Iraq and Jordan? How?

Captain Wonnacott: As I haven’t served in other theaters of Op IMPACT I probably can’t speak competently to a comparison, however at least one other Argyll is currently overseas on Op IMPACT and is conducting partner force capacity training.

Editor: Is there anything you’ve learned from the Lebanese military throughout the training process?

Captain Wonnacott: The Lebanese lean heavily on their junior officers to act in roles which I would normally task down through Sr NCOs. Their NCOs also have less formalized training to qualify than many of our NCOs and WOs would. This caused me to have to step back and go through my own NCOs more to demonstrate trust in their capabilities. It also reminded me of the extremely high level of professionalism, capability, and knowledge within the Canadian non-commissioned soldiers, even down to my corporals.

Editor: How did the culture in Lebanon influence the way in which the training program was conducted?

Captain Wonnacott: There were basic cultural issues – like the length of a training day – which we had to accustom ourselves to. Canadians, especially reservists, want to cram as much training into a short period of time as possible. We quickly found that a tempo like that would not be productive for soldiers who were completely new to a winter environment (many had never seen snow in person before). Females in the military are also a relatively new concept and the military culture of Lebanon is adjusting to the change. As such we were given interpreters who would work with us, but due to the limitations of their daily employment, would leave in the afternoon. The LAF was also unsure about taking direction from Canadian Female instructors. One of my Warrant Officers, WO Knapp, was supervising a platoon as the lead and there was reticence expressed that they had a female in charge. In every case I just sent them back to her – her professionalism, knowledge, and fitness were outstanding.

Editor: Does the training program entail that the Lebanese military is now using Canadian weaponry and military tactics?

Captain Wonnacott: It would be more appropriate to say that the LAF is more aware of Canadian habits and practices. Some equipment was donated as a result of various CTAT-L projects in order to help them with the winter training (things like clothing and snowmobiles).

However, the reality was that we needed to teach the Lebanese how to conduct cold weather training in a way which would be valuable to them, and despite the mountainous terrain, there just isn’t the same expansive great white North that Canada has. In that respect, I think ultimately it would be safer to say we gave the LAF another tool for their toolbox.

Editor: Thank you for your time.