In what can only be described as yet another blow to the US deployment in Afghanistan, Afghan President Hamid Karzai asked the NATO-led International Security Assistance Force (ISAF), most of whom are US troops—to move out of rural areas and villages, back to their main bases. This is in response to the killing and desecration of 16 Afghan civilians—nine children and seven adults—by a US soldier on March 11 in Kandahar province.  While it is believed the soldier responsible for the killings acted alone and may have suffered a psychological breakdown, the Afghan government is furious, calling the killings an “assassination” and demanding an immediate response from Washington. This comes shortly after the burning of Muslim holy books at a US military base, which resulted in weeks of protest and the deaths of approximately 30 people. 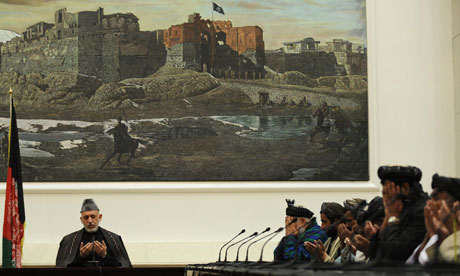 Afghanistan's President Karzai prays during a meeting with relatives of victims of the Kandahar massacre. Photograph: Photo Corbis.

In light of these events, Karzai’s hope is to have national security responsibility fully handed over to the NATO-trained Afghan National Army and Afghan National Police forces by 2013, a year earlier than the planned NATO troop withdrawal. This move has been seen as counterintuitive by some international policy analysts, who fear that a hastened hand-over of forces, as French President Nicolas Sarkozy suggested last year, is simply too soon given the recent success of ISAF forces in these areas. As some media critics argue, this has the potential to hand responsibility over to a group of “incompetent, corrupt, illiterate drug users” who will fail at keeping the rural areas safe in comparison to ISAF forces. Karzai has remained optimistic that an accelerated changeover is preferable if his forces are ready. US President Barack Obama, however, remains steadfast that the gradual drawdown will stand, with final troop withdrawal occurring by 2014.

Still, there remains little discussion on the response of the Afghan people to these recent events or Karzai’s hope for a swifter transition via the expulsion of ISAF forces. As is the case in many conflict-ridden countries, civilian responses to major policy decisions at the national level are often left off the table, with media outlets offering a limited and biased perspective of current public opinion. For Afghanistan specifically, perspective plays a large role in the power struggle between the Taliban and the Afghan government, with the Taliban using sweeping statements of general malcontent to undercut the Karzai government and its cooperation with the United States. Arguably, this is to regain civilian support in the more rural, removed communities while creating a fissure between Karzai and the US. In response to the recent shooting of civilians by a US soldier, the Taliban released the following statement: “The so-called American peace keepers have once again quenched their thirst with the blood of innocent Afghan civilians in Kandahar province,” effectively meeting both of their aforementioned goals simultaneously.

Experts in international relations policy exacerbate this misrepresentation of public opinion further with statements like that of Notre Dame University Peace Scholar David Cortright’s, which aim to speak the hearts and minds of people he does not even know. Speaking on the civilian bloodshed, he states: “This may have been the act of a lone, deranged soldier. But the people of Afghanistan will see it for what it was, a wanton massacre of innocent civilians.” According to Terry Glavin—author of Come in From the Shadows: The Long and Lonely Struggle for Peace in Afghanistan—the academic and ideological dichotomy between the pro and anti-intervention camps has the potential to derail Afghanistan’s future success: “What we say matters…it will determine how much they allow themselves to hope for a peaceful and democratic future and how far they’re prepared to come from the shadows, out into the light.” The Western discourse surrounding Afghanistan is ultimately reduced to a he-said, she-said game of accusation and posturing, while drawing little input from those actually effected.

Ironically, a plethora of literature and polling data exists to answer the question of public opinion in Afghanistan. The Asia Foundation, a non-profit organization with offices in the country, offers a comprehensive summary of public opinion within Afghanistan by surveying individuals on everything from how they feel about the direction their country is moving in, to whether they feel safe in their own neighbourhoods. Their 2011 report recorded that when asked what the biggest problem in Afghanistan was, only 8% of those polled saw “interference of foreign countries” as being the largest concern. Rather, the majority (38%) saw “insecurity” as the most troubling. Seemingly, a large segment of Afghanistan’s 29 million citizens feel quite differently from Karzai in that they don’t see foreign intervention as the primary problem and are actually more concerned about the county’s internal insecurity than foreign countries interfering in domestic affairs.

It may be tempting to conclude that because these shootings and book burnings implicate the US as a security risk to civilians, Afghans are more likely to encourage their expulsion; however, this contradicts the findings of organizations like the Asia Foundation which have shown that systemic issues like long-term, nationwide unrest, insecurity, unemployment, inadequate education, and insufficient women’s rights—to name a few—are far more troubling to the general population than these occasional flare ups. Thus, learning that the under-trained and understaffed ANP/ANA are taking over domestic security, and consequently ISAF forces are fleeing Afghanistan’s most troubled regions sooner than originally anticipated, should produce an outcry of public discontent that receives as much attention as the latest pundit’s proclamations.

Paige MacKenzie is a graduate of Simon Fraser University in Burnaby, BC. She has a BA in international studies with a specialization in security and international organizations. Her research interests include Central Asian security issues and terrorism. She recently completed an internship with the Carnegie Endowment for International Peace in Washington, DC.

Paige MacKenzie
Paige MacKenzie is a graduate of Simon Fraser University. She has a BA in international studies with a specialization in security and international organizations. Her research interests include Central Asian security issues and terrorism. She recently completed an internship with the Carnegie Endowment for International Peace in Washington, DC.

Brody McDonald argues that the interests of Iran’s Revolutionary Guard need to be regarded in any international negotiation on Iran’s nuclear program.