Last week marked one of the bloodiest in Iraq since the withdrawal of U.S. troops in December of last year. With a series of attacks on Shi’a targets claiming over 100 lives, concerns that sectarianism is re-emerging in Iraq are beginning to surface. Responsibility for the attacks once again falls with local al-Qaeda operatives, known as the Islamic State in Iraq (ISI). This is the sixth straight month in which the ISI has carried out at least one major attack. Although some level of violence is to be expected in a post-conflict state, there are growing concerns that Iraq may be returning to a dangerous level of sectarian violence. In many ways, this violence is a symptom of the lack of unity among the major groups in power—which in turn has produced a government characterized by corruption, inefficiency and distrust.

No Confidence for Maliki

Nour al-Maliki—arguably the most powerful person in the country—currently serves as the Prime Minister and also holds the positions of acting Defense Minister and Interior Minister. Maliki, a member of the majority Shi’ite sect, has been in this position since 2006 and is currently in his second term in office—a term that has largely been defined by his opponents’ attempts to unseat him.

A defiant Nour al-Maliki is exacerbating sectarian tensions in Iraq.

The current government was born out of the Arbil Agreement, a multi-party settlement designed to create a coalition government in which power would be shared among the three major political parties. This has largely failed to occur, amidst signs that the PM is increasingly monopolizing power. He has failed to allow the other major political parties to take over the positions of Defense and Interior Ministers, which he has kept for himself in a process of tightening control over security forces in the country.

Owing to his ever-increasing grip on power, Maliki is facing a growing challenge from his opponents who have recently attempted to remove him from power for the second time in 18 months through a vote of no-confidence. His Sunni and Kurdish opponents have been waging a battle against Maliki for most of his second term, but have been recently joined by one of the most prominent Shi’ite clerics in the country, Mutaqada al-Sadr. Although the previous vote fell short of the 163-person majority needed, his opponents are not ending their fight and are now considering more time consuming options to unseat him. Critics worry that this increasing timetable will only allow Maliki to further tighten his control over the country and prevent the unity needed within the government—the lack of which many worry is fuelling the growing sectarian divide within Iraq.

A Rushed US Withdrawal

Many observers have pointed to the rushed withdrawal of US troops from Iraq as one of the key reasons for the fractious state of politics in the nation. According to Ramzy Mardini from the Institute for the Study of War, the presence of US troops within Iraq acted as a stabilizing force, bounding political actors to a set of expected behaviours and norms. When the US military withdrew, political institutions had yet to develop, security forces were lacking proper training and intelligence-gathering abilities were almost non-existent. The ramifications of the narrow focus on ending one of the most unpopular wars in history as quickly as possible with no clear exit strategy has and will continue to cause serious challenges for the political system and security within Iraq. 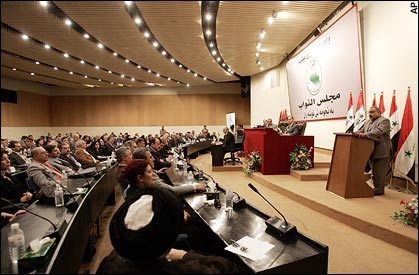 The Iraqi parliament, a microcosm of this divided Arab state.

There are worrying signs that Iraq may be reaching a breaking point. Divisions within the government are increasing, Maliki is continuing to consolidate his grip on power and violence is once again on the rise. Iraq may have a US-style constitution, but its political system is defined more by chaos and sectarian battles than anything else. If the major political groups and the Prime Minister are not able to work together to devise a strategy and vision for the future of Iraq, progress in any area seems unlikely. Iraq remains an extremely fragile state, and with tensions at such a high level there is a concern that anything could go wrong. And without a serious dedication on the part of the PM to take the necessary steps to prevent Iraq from falling back into chaos, it is increasingly likely that it will.

How has the Islamic State (IS) become the wealthiest organization in the Middle East in such little time? Samir Mourani explains how IS produces enough income to sustain its expansionist agenda.

Sovereignty Collapsed: Daesh and the Return of Bandit Kings

Eric Morse and Stéfanie von Hlatky explain how ISIS has transformed our common understanding of borders, sovereignty and the international system in just a couple of years.

Tahera Qurban Ali reports on her experiences in Afghanistan, nearly thirteen years after 9/11.