The previous article on NATO and the implementation of UNSCR 1325 can be found here: Women and NATO: A Necessary Gendered Perspective

Women are considered assets in NATO-led operations in Afghanistan and Kosovo because of their supposedly superior empathy and communication skills. Though this assertion is reductionist, NATO Assistant Secretary General for Operations- Ambassador Evans’ statement about the specific role they play does ring true. He stated that “NATO female soldiers train and mentor Afghan female soldiers. They set the example in a society that is not used to seeing women in roles that are traditionally assigned to men”. The percentage of women in NATO Armed Forces is more than 10.6%, a figure which, though low, is markedly higher than in non-NATO troops. Unfortunately, this data also shows that while women in NATO Armed Forces are relatively well represented in subordinate positions, they are far less likely than their male counterparts to rise to prominence as officers. Interestingly, the lack of women in senior positions appears to be contained within the military, with civilian women in diplomatic and political positions achieving great heights in their careers. If female soldiers are to engage with and inspire women in Afghanistan (and other NATO missions) and to dedicate themselves to a difficult and dangerous career in military service, it can only be surmised that their enthusiasm will be curtailed if potential for career advancement is lacking.

In the context of NATO operations, UNSCR 1325 is envisioned as a way to increase female presence not just in the military but in all areas of public life. This undertaking is especially important in countries like Afghanistan and Kosovo where women have historically been restricted to the private sphere. The resolution faces an uphill battle with respect to acceptance by local cultures, but with the tenth anniversary of its passing, NATO has recommitted itself to successful implementation of UNSCR 1325.

The Implementation of UNSCR 1325 in Afghanistan

The challenges of implementing UNSCR 1325 in a Muslim culture are undeniably complex. Afghanistan has only recently emerged from significant Taliban control, and the customs and practices attached to the former regime of oppression remain deeply embedded in much of the nation’s psyche. However, there are Afghans who express confidence in the country’s ability to integrate its religious traditions with gender equality. Prominent Islamic scholar Mohammad Hashim Kamali posits that the Qur’an itself is far from prejudicial towards women, in fact it encourages female participation in political and economic positions of power. He argues that it is not the Qur’an but conservative interpretations of it which, when combined with the remnants of oppressive, pre-Islamic Afghan tribal cultures, have created this misconception. Kamali states that it is these misconceptions that have led to the patriarchal structure currently prevalent in Afghan society. He argues that “For Afghans, ethics require religion, and the basic logic of UNSCR 1325 is ethical.” 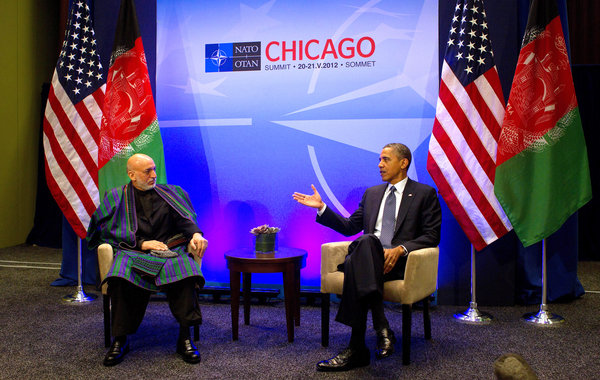 NATO's role in Afghanistan after the end of combat operations was on the agenda at the 2012 NATO Summit in Chicago.

Of course, there are many in Afghan society who would not agree with this progressive interpretation of the Qu’ran and in a fledgling democracy such as Afghanistan, it is crucial that all viewpoints be taken into consideration when attempting to implement a statute like UNSCR 1325. Determining how best to reconcile the progressive values put forth in UNSCR 1325 with the traditions embedded in the conservative Afghan culture will be a challenge for gender equality in Afghanistan to move forward. It is also essential that the implementation of UNSCR 1325 is not seen as an imposition of Western values on Islamic culture. Rather, efforts must be made by all parties to establish and work toward goals such as increased female representation in the political and economic spheres. Women’s participation in a country’s economy is shown to exponentially increase its economic growth and reduce poverty rates.As a developing country, Afghanistan would undoubtedly benefit from a more gender equal workforce.

Meaningful discussion and collaboration between NATO representatives and, most importantly, between Afghans is necessary in order for Afghan men and women to accept and encourage the steps towards gender equality set out in UNSCR 1325. Ensuring that women’s security and freedom is respected and cultivated is essential to a successful post-conflict Afghanistan.

The Implementation of UNSCR 1325 in Kosovo

Kosovo, while an arguably more Western country than Afghanistan in many ways, nonetheless faces many challenges of its own in implementing UNSCR 1325. As a very new country with a violent past, Kosovo is emphasizing security reform and engaging women in the peace-building process. Kosovo’s multi-ethnic demographics make it necessary to again consider all sides when discussing and implementing broad reaching policies regarding gender rights. Because of Serbia’s refusal to recognize Kosovo as an independent state, a view supported by many other countries, the UN must tread somewhat carefully in both its support of Kosovo and its implementation of UNSCR 1325. Despite these difficulties, it is important for the country and NATO to persevere with UNSCR 1325, particularly with regard to increased inclusion of women and minority groups in policy making.

NATO has been leading a peace support operation in Kosovo since 1999. The organization's role has continued to evolve as the country's security situation changes.

Kosovo’s short history as an independent state thus far has not been particularly concerned with gender equality, beginning with the lack of attention given to gender rights in the Ahtisaari Plan – Kosovo’s peace settlement. The plan focuses on the region’s move toward independence and highlights the rights of Kosovo Albanians but makes no mention of gender equality or women’s rights. Although measures such as the implementation of a 30 percent gender quota in political activity have moved Kosovo closer to formal equality, the cultural stigma attached to women occupying positions of power is unfortunately still a prevalent one. As NATO involvement in Kosovo continues to evolve, it is important that greater attention be paid to UNSCR 1325 and the role it can play in establishing a framework for incorporating gender perspectives into post-conflict development.

The implementation of UNSCR 1325 in both Afghanistan and Kosovo still faces many challenges. However, the hope is that both nations will benefit from NATO’s recent recommitment to the resolution and that UNSCR 1325 will continue to make inroads in both formal gender equality and cultural perceptions of gender roles.

Avery Bruenjes
Avery Bruenjes is a J.D. Candidate (2015) at the Schulich School of Law at Dalhousie University and holds a B.A.(Hons) in Contemporary Studies and English from the University of King's College. Driven by her interest in women's rights, Avery worked this past year to co-design a program educating women who are currently in or recently departed from abusive relationships on issues of custody and legal rights. Her other research interests include international conflict resolution and the changing nature of domestic and international surveillance.

Every year, from November 25th to December 10th, the NATO Association of Canada is proud to participate in the 16 Days of Activism Against Gender-Based Violence Campaign. This campaign highlights the need to address the violence that women face at all levels and in all arenas. This year, the focus is on ending gender-based violence Read More…