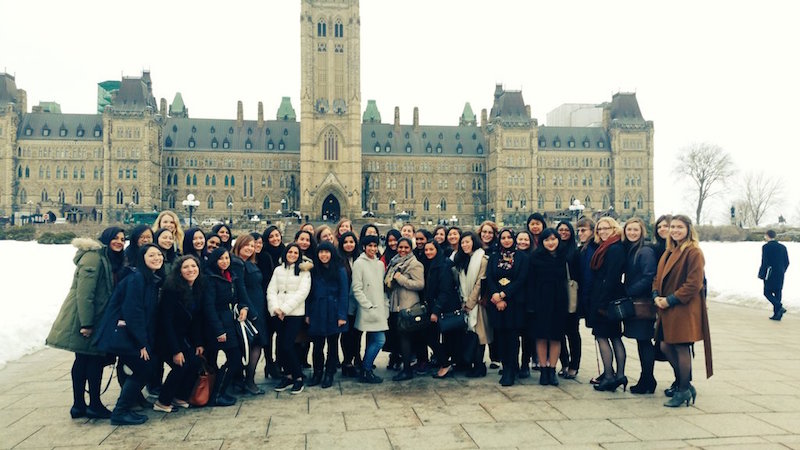 University of Toronto Women in House has been empowering young women to pursue a career in Canadian politics since 2012, when it was co-founded by Ph.D. candidate Tina Park, a board member of the NATO Association of Canada, and the Honourable Dr. Carolyn Bennett, M.P. for St. Paul’s and Minister for Indigenous and Northern Affairs. Park was advising the Inter-Parliamentary Union Assembly in Quebec and met Bennett at the reception, and the two quickly noticed the lack of female parliamentarians at the Assembly. Upon their return to Toronto, they decided to partner with various programs at U of T to formally launch Women in the House in Spring 2013 with 20 undergraduate students. Over 120 students have participated so far, from programs including the Margaret MacMillan Trinity One program, International Relations Program, Trudeau Centre for Peace, Conflict, and Justice Studies, Department of Political Science, School of Public Policy and Governance, University College, and Massey College.

The program, which runs once a year during the first week of March in honour of International Women’s Week, provides female students with a two-day trip to Ottawa to shadow a female MP or senator and learn about the Canadian political system. Participants have the opportunity to gain an insider’s view into the daily life of a female politician in the Canadian federal government. U of T Women in House is bilingual and represents both the government as well as opposition parties. Past parliamentary participants in U of T Women in House have included Elizabeth May, Kirsty Duncan, Yonah Martin, Peggy Nash, Lisa Raitt, Pat Perkins, and Chrystia Freeland, among others.

Tina Park kindly agreed to answer some questions about the program for this article.

Q: What is the most rewarding aspect of the Women in the House program for you?

“My favourite part about the U of T Women in House program is the boundless potential of our participants, and the lasting impact that the trip will have for the rest of their lives. Our students come from all walks of life, with different interests, skills and goals, and because they are paired up 1:1 with a parliamentarian, every single participant will have a different experience on the shadowing day. For many of our students, U of T Women in House is their first direct exposure to the life of a federal politician as they follow the footsteps of their host MP or Senator. Our students often find it to be a very exhilarating, fast-paced and life-changing experience. What you read in the news is suddenly in front of you and you are part of very important discussions affecting Canadian society at large, even if it’s just for a day.

We agree that gender inequality is a serious issue in federal politics, and the U of T Women in House program tackles that problem in a very practical way. I have no idea where our participants will be ten years down the road, or how this experience will change their perspective about Canadian politics, but I do know that it is an awakening experience for every single one of them and have faith that whatever path they choose, they’ll always remember the trip and feel empowered (Some of our alumni are already working on the Hill and other political offices through connections made from this program). It has also been equally rewarding to see the support growing from the colleagues on the Hill — every year, we’ve had new MPs and Senators joining our program as we expanded the participants’ pool, across all parties, regions, and even male parliamentarians who support the cause of gender equality.”

Q: How would you like to see the program grow in the future?

“I would like to see this program continue as one of the permanent features of the U of T’s educational experience, both at undergraduate and graduate levels so that more students can participate and benefit from such opportunities. There has always been an intense competition for the spots we offer in the program, largely because our student population tends to be so bright and eager and because we are only able to fund a certain number of students. So far, we have limited application eligibility to certain participating programs, but I’d like to work on securing long-term funding and logistical structure and ensure that the program remains active for the next ten, fifty years and beyond.”

Q: What is your favourite memory from one of the trips?

“There are so many memorable moments from each trip, but a couple of them stand out. On the last trip, we crashed the birthday party for the chief of staff to Minister Harjit Sajjan because our networking reception took place in the room adjacent to his party. So a group of 45 girls got together and sang an in-promptu happy birthday song and we managed a photo op with the Minister of Defence. In 2014, at the same venue, we ran into then-Minister of Finance, Jim Flaherty. He was in good spirits and took the time to meet with our students and gave us some candid advice. That was one of the last public appearances he made before he passed away. Because our program schedules the shadowing day to coincide with the International Women’s Day, we ran into the Prime Minister and Ms. Sophie Grégoire-Trudeau during our last trip. I’ll never forget that she took the time to give a big hug and talk to our students — which will always be a special memory for our students. We had a visually impaired student participating for the first time in 2016, who shadowed Minister Carla Qualtrough, and I was also very moved by the spirit of love and collaboration from the rest of the cohort, who helped out to make the trip possible for her.”

Q: What is your advice to women pursuing a career in politics or other areas that are traditionally gender-imbalanced?

“I’d say it’s important to dream big and be as competent, daring and articulate as you can be for the causes you care for. Being a voice of influence and authority in any field takes a lot of courage, hard work and dedication. I think it also requires strategic long-term thinking about what matters most to you and willingness to remain firm against societal and cultural pressures about gender norms. For instance, some of my female MP friends still struggle with the issues of raising children when they have to travel for work to Ottawa every week and their family lives a few time zones away. However, in my own experience, and the experiences of many female parliamentarians I’ve encountered, being a woman can actually work to your advantage, especially when it comes to soft skills like negotiation, interpersonal relationships, and communication skills. So I always tell our students to focus on their passion, build skills, networks and resources, and never forget that their own identity is a source of strength.”

U of T Women in House is an impressive initiative to promote gender equality and women’s empowerment, highlighting the importance of addressing gender-related issues and inspiring its participants to effect change. News coverage of the 2016, 2015, and 2013 trips can be found by clicking on those links, respectively. Thank you to Tina Park for dedicating her time to this article.