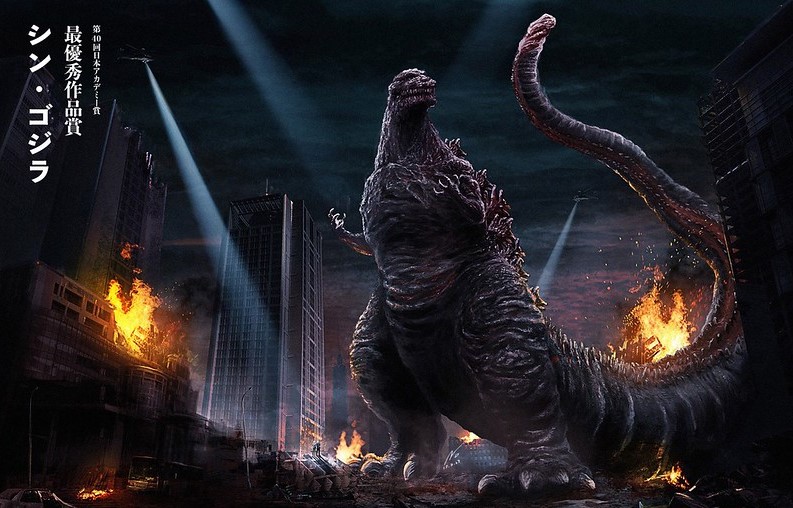 In 1954, Japan’s Toho Studios released the first Godzilla film (Gojira in Japanese), which drew inspiration from the nuclear destruction at Hiroshima and Nagasaki nine years earlier.  Now well into his 60s, you would think that Godzilla should have already planned a smooth retirement. Instead, after a blockbuster 2014 Hollywood re-emergence and a superb Japanese addition with 2016’s Shin Godzilla, he is stronger, bigger, and meaner, but also more globally helpful than ever before.

The symbolic evil that Godzilla embodied was always multi-pronged, with the reptilian monster and his adversaries standing in for a range of technological, political, and ecological threats to humanity. Initially, Gojira was conceptualized as a destructive force analogous to the atomic bomb, but in his various incarnations since he has sometimes been portrayed as a protective force shielding humanity from more dangerous foes.

In 1971, especially with the release of Godzilla vs. Hedorah, pollution was still seen as a problem that could be solved by a single powerful Godzilla. Similarly, people have remained focused on finding a single entity (whether the US, China, or the EU) to lead the fight on climate change, when in fact some of the most meaningful action is coming from the countries in the developing world that are most impacted by the crisis, such as Pakistan.

On Friday September 27th, 2019, Pakistani Prime Minister Imran Khan gave a 50 minute long stirring speech at the UN. He started the speech, by praising God, Prophet Muhammad (PBUH) and addressing the crowd present. In the speech, he mentioned four crucial challenges facing the Pakistani nation. These were climate change, money laundering and corruption, Islamophobia and the Kashmir conflict.

Climate change wise, Imran Khan said that the states of Pakistan and India receive water from the glaciers in the Himalayas, Karakoram, and Hindu Kush Mountain ranges. In Pakistan alone, the government recently “discovered 5000 + glacial lakes in the Northern Regions”, otherwise known as the “throne room of the mountain Gods”.  Pakistan has, as he noted, “already 5 billion trees planted in 5 yrs in the province of Khyber Pakhtunkhwa (KPK), with a new target of 10 billion in the coming 5 years across all of Pakistan. He talked about the inherent need for action on climate change as Pakistan is number 7 on the list of most vulnerable countries”. He even stressed on the importance of the combined global efforts of all countries rich and poor. These efforts being in investing in green technologies, taking care of the environment, and reducing the production and consumption of greenhouse gases in the atmosphere within the next decade or two. It very much seems like that given his pro-environmental policies and strong resolve to fight climate change, in the hopes of restoring the environment.

In Imran Khan’s terms and similarly among other upper level dignitaries, there exists a climate emergency. As such, his current government has laid out plans on climate action, including a ban on plastic in Pakistan, fostering more innovation in renewable resource technologies via the Pakistan Council for Science and Technology and the Ministry of Science and Technology. The Pakistan Council of Renewable Energy Technologies (PCRET) has been directed by the government to construct around 80 mini-hydro power plants in Northern Pakistan to enhance renewable energy generation and minimize the use of green house gas emitters in Northern Pakistan. Imran Khan is doing a lot in Pakistan pertaining to climate change in order to mitigate the effects of an impending crisis. These include the planting 10 billion trees across the country, and, fostering innovation via the creation of world’s first eco-friendly jet engines. It is stated that the engine is a contrail free engine that could produce artificial rain. The positive impact such engines could have on climate change include the possible mitigation of droughts due to artificial rain produced by jet engines, more capabilities to douse wild fires, and allowing the Ozone layer to repair itself at a faster rate. In fact, Imran Khan’s previous government of Khyber Paktunkhwa demonstrated its responsibility in tackling climate change by planting 5 billion across the province in a 5 year period.

In fact, the UN recently drafted a united global climate change action plan following the 2019 Climate Summit, hoping to enforce it through collective action, similar to the Paris Accord. The list of Solar Photovoltaic panels, Wind Power, Langenburg Power Plant, Magneto-hydrodynamics and Electrolysis system, represent just a few of the ideas that have emerged. Ideas such as geothermal, air powered, bio-fuel powered (those iconic used vegetable oil-run vehicles) are among other future technological innovations in energy. These ideas are suggestions that may allow NATO to continue to be at the forefront of global peace and security, not to mention doing so in a clean and green manner.

A great example of a collaborative fighting force is NATO, which has been paramount, in maintaining peace and security across the globe, working often side by side with the UN on issues pertaining to global security. With Jens Stoltenberg, commenting that NATO plays an important role in the fight against climate change, it seems worrying the some NATO countries opt to blatantly disregard the effects of climate change. One such member is the United States of America, led by President Donald Trump. Trump has often criticized climate change saying that it is insignificant and that the US would rather focus on internal development and job growth at the expense of the environment.

Yet, Pakistan is not seeing the collaborative fight from other countries especially developed countries, such as the US under Donald Trump. Other developed countries such as Denmark, Norway. Germany and Canada among others are striving to improve the environment, demonstrating to the world that change is being conducted for the greater good of society and the environment. In fact, climate change action is more omnipresent in third-world and developing countries. In essence the global south is leading the fight, with Imran Khan as a figurehead. Since, Prime Minister Imran Khan has been at the forefront of climate action, there is a lot the world can expect from Pakistan, with the “Captain” at the helm.