After months of warfare and internal strife, Mali successfully elected a new president on August 11th. Mutinying soldiers staged a coup and removed Mali’s last democratically elected president from power in March 2012, precipitating a civil war that saw northern Tuareg and Islamist groups declaring the independence of the country’s northern regions. The intervention of French military forces and the African-led International Support Mission to Mali (AFISMA) managed to restore some level of stability, forcing secessionist groups to accept a peace deal with the Malian government in June 2013.

But there had been grave concerns for the vote in Mali, especially as many West African countries have had to contend with disputed results and post-election strife over the past year. A legal dispute over the results of the 2012 Ghanian presidential election has been before that country’s Supreme Court for eight months and looks set to continue for some time to come. In April 2012, military forces interrupted a presidential election and seized power in Guinea-Bissau. An attempted coup in Burkina Faso failed to remove Blaise Compaoré from the presidency. Given these regional developments, the stakes were clearly high when Malians went to the polls: a peaceful and fair election would be vital to building confidence in state institutions, but an outbreak of violence or accusations of fraud could derail the peace process. 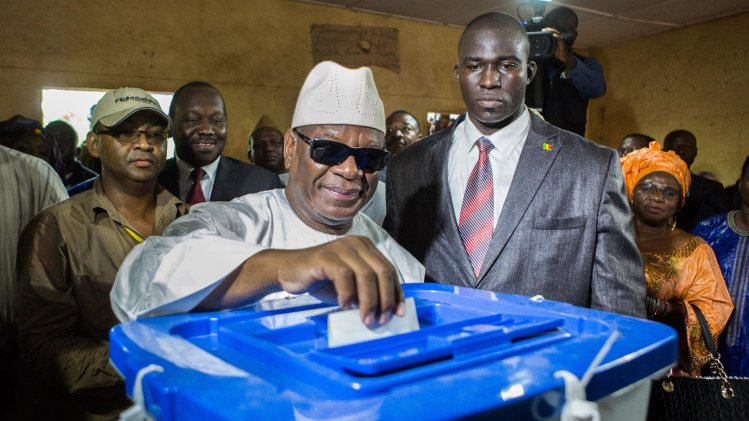 Ibrahim Boubacar Keita was elected as President of Mali in this month.

Fortunately, both rounds of the Malian presidential election were free of violence. Rather than challenge the integrity of the results, Soumaila Cissé conceded defeat after receiving 22.39% of the vote against frontrunner Ibrahim Boubacar Keita’s 77.61%. International observers deployed by the European Union found that, while there were certainly some administrative shortcomings, the election was relatively free and fair.

With an undisputed mandate, the presence of 11,000 UN peacekeepers and a remaining 3,000 French troops, as well as the assistance of a European Union Training Mission, newly elected Ibrahim Boubacar Keita is presented with an immense opportunity to rebuild Mali. However, it is unclear whether Keita recognizes the importance of reconciliation with northern Tuareg communities to the re-stabilization of Mali. During the election campaign, Keita advocated a tough stance with those communities that fell within the boundaries of secessionist Azawad, rejecting calls for increased regional autonomy. Also of significant concern, the officer who led the 2012 coup d’etat, Captain Amadou Sanogo, was recently promoted to the rank of Lieutenant General.

Sanogo’s promotion has generated tension among Tuareg communities in the north of Mali, leaving some suspicious that Keita cannot be relied upon to implement the terms of the recent peace deal or a 2006 agreement that ended a previous civil war. The demands made by Tuareg communities in the wake of the election are much the same as those made prior to the recent conflict and include the establishment of a second hospital for the region, paving several crucial roadways, and the withdrawal of Malian military bases from the north. While the status of military forces in the north will no doubt remain a sticking point for both sides, there could be serious repercussions for national unity if Keita fails to deliver on the infrastructure projects requested by northern communities and agreed to in the 2006 peace deal. With international donors committing to $5.9 billion in relief, of which Canada will contribute $75 million, the true test for Keita and Malian unity will be whether this aid can be well distributed across the entire country. If Keita is seen to disproportionately favour the south, the violence in Mali may resume once more.

The Evolving Role of Non-State Actors

Non-state actors are playing an increasingly disruptive role in international maritime affairs. Paul Pryce discusses how to reinforce the legal norms that rule the waves.

In a continuing series on the Arctic, Paul Pryce casts doubt on a proposed expansion of the Canadian military’s Arctic Training Centre in Nunavut.