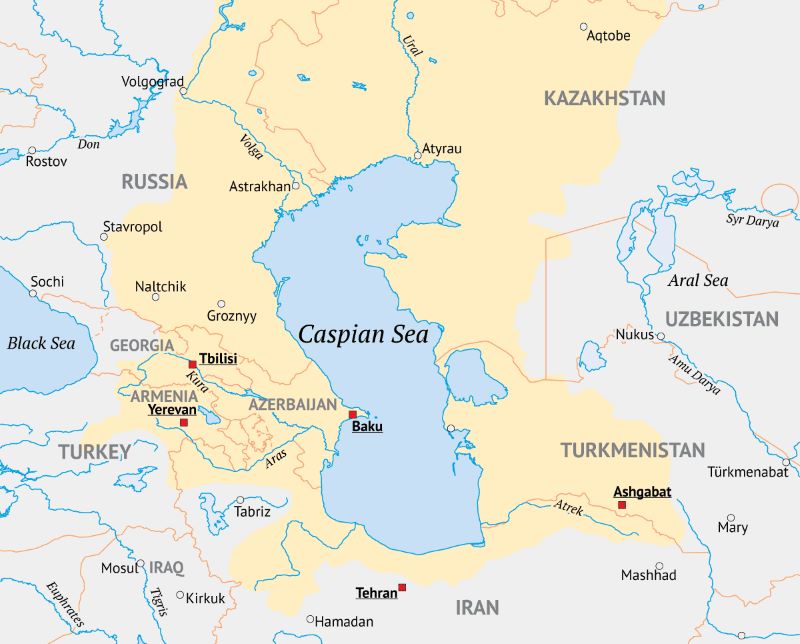 After more than 20 years of negotiation, and despite all the skepticism, there is every indication that five-party the Convention on the Status of the Caspian Sea will be signed in Aktau, Kazakhstan, on August 12. In fact, it was clear last December that it would be signed soon enough, when the Russian foreign minister Sergei Lavrov announced that agreement had been reached, rapidly confirmed by official Baku.

Why has it taken so long since then to sign? Because of the normal diplomatic need for translations and verifications by specialists. Also there are a number of associated agreements that have had to be arrived at, and in a proper sequences.

In addition, as is well known, Iran had consistently refused to accept less than 20 per cent of the Caspian sea-bed, although by each of the three possible methods of delimitation according to international law, it only was entitled to 13-14 per cent.

But the draft text of the Caspian Convention, which was inadvertently published on a Russian government website before being removed 12 hours later, makes clear that the delimitation will be made “according to generally recognized principles of international law”. Therefore, Iran is not getting 20 per cent.

Some observers have wondered why the details about delimitation are not in the Convention, and whether this indicates yet another disagreement or roadblock to the agreement. The answer is no, because it is normal for such details to be included in a Protocol to such a Convention.

In addition, the “modified median line” method creates the possibility to adjust the conditions of the boundaries. Thus, while the Azerbaijan/Iran boundary will likely be where it should be, the two countries have recently finalized agreement that Iran can participate in developing a deposit in the Azerbaijani sector. This deposit is not named, but it is almost certainly the Alov deposit, where Iran (which calls it Alborz) militarily threatened vessels chartered by the company BP in 2001, in order to halt development.

Likewise, there have been “side deals” made between Turkmenistan and Iran; and Russia has agreed to construct drilling rigs in Astrakhan and float them over the Caspian Sea into the Iranian sector, so that Iran, which has only one such rig today, can drill in its own offshore. All these promises have convinced Tehran to sign.

In addition, Iran had become isolated. It had been the case for years that Russia and Iran teamed together to make it obligatory that any pipelines on the sea-bed could be laid only with the consent of all five littoral states. This insistence was targeted at halting the Trans-Caspian Gas Pipeline (TCGP) from Turkmenistan to Azerbaijan.

For Russia, however, in recent years, blocking that pipeline gradually became less important, while the need to set into order a general security regime became more important. Iran was left isolated. Such unanimity is not required in the Convention that will be signed.

The draft text of the Convention, as published on the Russian government website, says plainly that all littoral countries have the right to lay pipelines and cables on the sea-bed in their national sectors. The sub sea sectors of Turkmenistan and Azerbaijan themselves have a border in the centre of the Caspian Sea, so they do not need any other country’s permission. This is what they have long insisted, and it is in conformance with general principles of international law.

In this connection, it is worthwhile to note that a joint study by the World Bank and the European Union about the ecological and environmental impact of the TCGP gave the pipeline a green-light several years ago. This puts the pipeline also into conformance with the conditions of the Tehran Convention (full name, Framework Convention for the Protection of the Marine Environment of the Caspian Sea), signed in 2003 and which entered into force 2006.

It is no coincidence that the Aktau Protocol to the Tehran Convention, on combating pollution incidents, entered into force in July 2016, as the Caspian Convention itself was in the final stages of preparation.

There is space in the TANAP and TAP pipelines for gas from Turkmenistan. And that gas is literally at Turkmenistan’s shore of the Caspian Sea, where the East-West Pipeline (EWP) carries deposits from the southeast of the country, and where it is now capped, awaiting construction of the TCGP, which the European Commission has selected as a Project of Common Interest.

Not only are all the building-blocks now in place, but also the European Union’s Connecting Europe Facility and the Government of Georgia are funding the preliminary engineering and other studies for it. After costs are specified, the transportation tariffs can be calculated, and then shippers can negotiate sale-purchase agreements with Turkmenistan.

One is justified to expect such developments to quickly accelerate.

Photo: “Map of the area around the Caspian Sea” (April 11, 2018) by Redgeographics via Wikimedia Commons. Licensed under CC BY-SA 4.0.