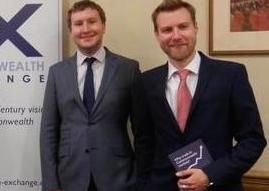 Tim Hewish and Ralph Buckle, co-founders of the Commonwealth Exchange, joins our podcast this week following our lunch event on Monday regarding Commonwealth Defence.

Jason Kenney, Minister of National Defence, was not shy in endorsing many of the ideas in the Exchange’s report The Commonwealth’s Call to Duty, which follows similiar efforts in the realm of trade and immigration to advance the Commonwealth of Nations’ potential.

Mr. Hewish misspeaks at 2:26 – he intended to say sixty percent.