The Canadian government is facing heightened criticism this week for its 2011 decision to cancel Canadian participation in two NATO surveillance programs: the Airborne Warning and Control System (AWACS) and the Alliance Ground Surveillance (AGS).

Despite costs to Canada’s aerospace industry, the country’s military representative at NATO, Vice-Admiral Bob Davidson, says the move makes strategic sense because Canada is looking to develop its own surveillance programs.

This national conversation has emerged only two weeks after NATO Supreme Allied Commander Europe Philip Breedlove made an impassioned call for funding to Alliance members. In an attempt to save national defense expenditures from widespread austerity cuts, the US Air Force General underlined the importance of stable, long-term funding, so that the Alliance is prepared to face unknown and diverse challenges in the future.

“NATO is at its most cohesive yet,” he said, “but must ensure that spending cuts do not erode the power of an alliance facing tasks as diverse as a new training mission in Afghanistan and protecting Turkey’s border with Syria.”

He explained further, “Right now we [NATO] are at the height of our ability to operate together, our cohesiveness is high, our tactics, techniques and procedures are as good as they have ever been. My concern is that we do not lose the edge…clearly we need the budget to do that, so we are emphasizing with our NATO partners that defense spending is important.” 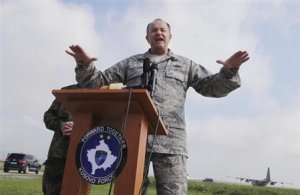 It is true that after thirteen years of war in Afghanistan, the extent of cohesion and interoperability between NATO allies has undeniably improved. However, the cost of this war, in dollars and in lives, has also motivated NATO’s pending withdrawal. Many contributing countries consider their debt to the alliance paid and look forward to the dividends of peace.

Though Canada fared the financial crisis better than many of its allies, it is by no means immune to this trend. The federal government posted a 2.7 billion dollar deficit in the first two months of its 2013-2014 fiscal year (beginning April 1). With a 2015 federal election in mind, Prime Minister Harper has made it clear that he wants federal finances back in black by then.

Though the conservative party once promised stable and predictable funding for the Canadian Armed Forces, the army has seen a 22% cut in funding since 2010. The Royal Canadian Navy has similarly seen an 11% decrease.

The spokesman for Canadian Defense Minister Peter MacKay told the National Post in March 2013, “After years of unprecedented growth, and following the end of the combat mission in Afghanistan, it is necessary for the government to balance military needs with taxpayer interests.”

These cuts make headlines, though perhaps indirectly. They explain why the Canadian Forces will no longer boast a brand new fleet of Lockheed Martin F-35 fighters, and why Prime Minister Harper has refocused his Arctic lens on development, as opposed to protecting Canadian sovereignty. Photo-ops north of the 66th seem quite unnecessary in the absence of an actual threat.

In short, after thirteen years of war and a global financial crisis, Canada and its NATO allies have been forced to re-evaluate their defense priorities and economize accordingly. As a network for, and product of, these member countries, NATO must do the same.

Last week, General Breedlove named failing states, restive populations and “ungoverned spaces” as the key issues facing the world. However, he insisted that NATO must be prepared to counter any threat, from counter-insurgency to “the more conventional defensive or offensive fights that NATO’s history was centered on.”

Given pressing fiscal realities, the General’s comments are unfortunately idealistic. With fewer resources at NATO’s disposal, attempting to cover all bases means that member countries will be relatively more vulnerable to their most likely threats. Rather than challenging the fiscal constraints of its member states, NATO HQ would do better to articulate how it intends to accommodate them.

Indeed, member states may be more amenable to contribute to NATO if they know measures are being taken to improve the efficiency of NATO spending. The War in Afghanistan has made clear that dollars spent on bigger guns and larger planes guarantee nothing. In such a challenging fiscal environment, it is perhaps timely to remember that strategy, not spending, that wins wars.

Is A More Aggressive Strategy To Counter ISIS Needed?

In the wake of the Paris attacks, our program editors consider whether the West’s military campaign against ISIS should be intensified.

Since the conflict in Mali began, the Canadian government has remained committed to its position of non-intervention. On January 23, 2013, Canadian Prime Minister Stephen Harper stated, “I do think it is important to help this mission. At the same time, I think we’ve been very clear, and I think this reflects Canadian opinion that, while we’re Read More…

Woodrow Wilson and World War I, One Hundred Years On