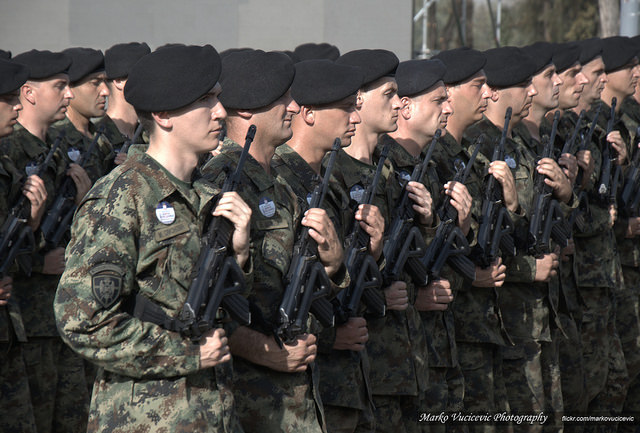 One of the greatest threats to peace in Europe, and indeed the world, is Russian aggression. Russia’s lack of respect for peace and national sovereignty is demonstrated by its numerous military interventions in Georgia, Syria and Ukraine. It repeatedly violates NATO airspace and territorial waters, and has been implicated in numerous cyber attacks against NATO members. Hostile actions such as these increase the risk of a confrontation, which could result in a major armed conflict. NATO should aim to resolve these issues peacefully through deterrence and diplomacy.

NATO should stress its steadfastness to defend its members. Merely condemning Russian actions and enacting sanctions is not enough to end Russian interventionism. It is necessary to conduct a campaign of active deterrence, which would entail prevention of attacks by the possibility of retaliation, and passive deterrence, making such attacks more difficult by improving defensive measures.

The first step should be increased cooperation among NATO allies and non-NATO states such as Sweden, Norway, Ukraine, and Georgia through military exercises, training, and intelligence sharing. More troops should be stationed in NATO strategic states to form a larger rapid reaction force, countering Russian troops deployed along the Ukrainian border. Although Russia will condemn this measure as provocation, this is necessary to ensure the security of Europe.

It is also important to mitigate the effect of Russian propaganda to prevent the alienation of Russian minorities in strategically vulnerable regions, an area in which Ukraine failed during the Russian intervention. It must be made clear that NATO is willing to defend itself and its allies against any aggression by Russia.

Increased defence budgets of major allied nations are an essential part of the deterrence strategy. The Alliance has a two-percent of GDP guideline for defence spending, which remains mostly unfulfilled. Even small increases in defence expenditure by the major NATO nations would unite the Alliance and make clear to Russia that the West will defend itself. This is unlikely to cause massive Russian rearmament in response, given the status of their economy and military budget.

The increase in spending by NATO members should be used mainly for procurement of new military technologies for the deterrence strategy. NATO must increase its air power, especially as the new Russian Sukhoi T-50 will have capabilities beyond the current NATO aircraft fleet. Several NATO countries are procuring the new F-35 fighter to fulfill this requirement. As witnessed during Operation Desert Storm, air superiority had a decisive impact in battle (Deptula, 2016). An integrated air and missile defence is needed to protect against Russian airpower and ballistic missiles. The lack of missile defences in Europe is especially concerning, given the rapid modernization of the Russian nuclear missile arsenal (Helprin, 2016).

Another important deterrent would be the modernization of NATO nuclear forces and doctrines, especially in light of Russian violations of several nuclear weapons treaties (Schneider, 2016). NATO should also harness new innovations, for example, the increasing use of drones. In the fighting in Eastern Ukraine, inexpensive drones were used by Russian backed rebels as real-time artillery spotters and reconnaissance drones, rendering troops vulnerable to enemy fire (Karber, 2015). Artillery targeting has also advanced, which was shown in the July 2014 Zelenopillya rocket attack where a single Russian “fire strike” almost destroyed two Ukrainian mechanized battalions within minutes (Scales, 2016). It is important that NATO learns from these engagements and adapt to changes in technology.

NATO must also develop electronic and cyber warfare capabilities. Recent Russian military operations have shown a sophisticated ability to manipulate and jam communications and weapon systems (Goure, 2016). Additionally, state-sanctioned cyber attacks by Russia, in which the Kremlin acts with impunity, must be countered.

Even though Russia and NATO are in an adversarial relationship, it is necessary to remember Russia is not a declared enemy, and that NATO must pursue diplomatic dialogue. The end goal of deterrence is not defeating Russia militarily, but for diplomacy to leverage a peaceful solution. NATO should attempt to reason with Russia. If it refuses to cooperate, diplomatic pressure backed by active deterrence and sanctions will have more weight than they do currently. As Theodore Roosevelt once said in a different context, NATO must “speak softly, and carry a big stick.” All efforts in this regard should be directed towards de-escalation. The diplomatic isolation of Russia can only be a temporary measure for international stability.

For NATO to counter Russian aggression, then, it is necessary to show Russia that NATO is willing to stand its ground, by cooperating with allies and investing in defence. It is also important to maintain a diplomatic relationship with Russia to de-escalate tensions between the two parties, and to have a channel for peaceful conflict resolution. The long-term goal should be to reintegrate Russia into the “community of nations” for a peaceful and prosperous future.

Aakash Budhera is a Grade 11 student at the University of Toronto Schools in Toronto, ON. He is passionate about politics and is particularly interested in defence and foreign policy. In the future, Aakash plans to pursue an undergraduate degree in Engineering with a minor in History, Political Science or Economics. Aakash is the winner of the Grade 11 & 12 Category for NAOC's 2016 high school essay competition. View all posts by Aakash Budhera →