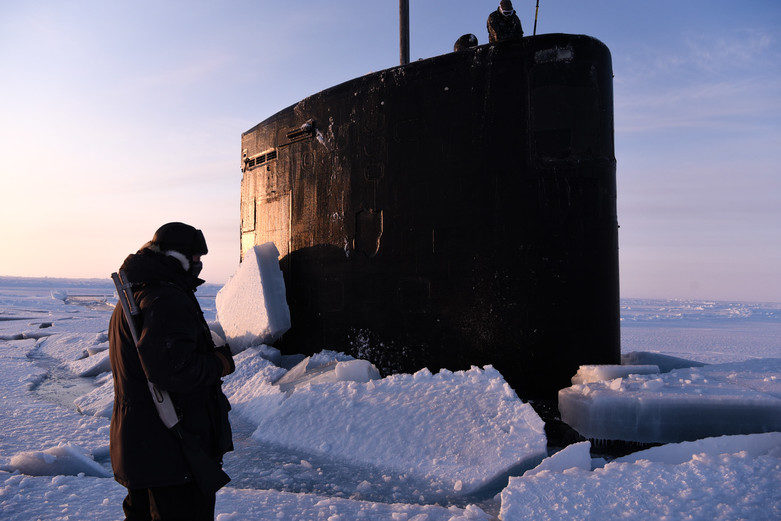 The Arctic is changing rapidly and the effects are clear. Retreating glaciers are threatening coastal cities with high sea levels. Shrinking sea ice is decimating the polar bear population. Increasing temperatures are disrupting indigenous peoples’ hunting. Disappearing permafrost is releasing once-frozen carbon dioxide, further exacerbating these effects. The melting of the Arctic is a situation that everyone wants to avoid.

For the six states bordering the Arctic Ocean—Canada, Denmark via Greenland, Iceland, Norway, Russia and the United States via Alaska—the changing Arctic is not only a challenge but also an opportunity. Shrinking sea ice allows for the exploitation of gas and oil. New trade routes are opening that shorten shipping time. For this reason, these states are competing fiercely to gain territorial control of the Arctic Ocean. With claims often overlapping, peace in the Arctic is under threat. If states wish to avoid conflict, they must act now to resolve their differences through international law.

The United Nations Convention on the Law of the Sea (UNCLOS) sets out how states can claim the ocean as part of their territory. States have full control of 12 nautical miles (nm) beyond the coastline, with an additional 12 nm subject to certain limitations. In addition, states can claim an exclusive economic zone (EEZ), an area that extends 200 nm from the coastline and allows for the exploitation of resources below the water. States can also claim the continental shelf up to 350 nm from the coastline or 100 nm from areas that are less than 2,500 m deep. A state can exploit resources there as long as a share of the revenue is given to the International Seabed Authority.

Due to the greater complexity of the continental shelf, claims must be submitted to the Commission on the Limits of the Continental Shelf (CLCS). Where there is an overlap for any claim to territory, states for can resolve their dispute through international judicial bodies, such as the International Tribunal for the Law of the Sea or the International Court of Justice.

The advantage of UNCLOS is its relative clarity. International law determining claims to land territory often requires the interpretation of complex treaties and historical examinations of who first discovered and occupied the land. In contrast, claims to the ocean are for the most part based on distance from the coastline or depth of water. When conflicts emerge, international judicial bodies provide a means to resolve disputes.

International law, consequently, is an excellent tool for Arctic states to resolve territorial disputes. To take full advantage, however, states must act swiftly. As the Arctic heats up, it will be easier for states to extract hydrocarbons and use new sea routes. Once states have invested in infrastructure that takes advantage of these resources, they will be less likely to cooperate when there is the possibility of losing territory. This is demonstrated in the South China Sea dispute. After building up military and civilian infrastructure, China rejected the Permanent Court of Arbitration’s ruling that China had no historic right to the Spratly Islands.

Taking advantage of international law means understanding and having faith in it. For instance, when Russia planted a flag at the North Pole in 2007, representatives of Western states accused Russia of trying to claim it as their territory. Russia stated that this was not the case, but even if it was, planting a flag has no legal effect. While no conflict emerged, greater confidence in international law would have helped to calm tensions.

Upholding international law also means abiding the decisions of international courts. No recent territorial dispute in the Arctic has been resolved through a court as of yet, but this possibility always exists. States may be wary of respecting court decisions when they do not result in the verdict they wanted. However, they must understand that such unsatisfactory outcomes are better than the alternative: undermining the international legal system, which would destabilize the Arctic.

The United States also has a critical role to play. It is one of the few states that has not ratified UNCLOS. In practice, the United States follows its rules, but without being a party to the treaty it undermines it. In addition, it will be unable to submit claims to the continental shelf through UNCLOS, potentially forcing it to do so unilaterally and thus help to weaken international law.

States should also push to strengthen the CLCS. Determining the extent of the continental shelf is highly complex. With insufficient resources there is a significant backlog in reviewing submissions, taking up to two or more decades before a decision can be made. Waiting this long may dissuade states from pursuing this process. For this reason, Arctic states should push for greater financing for the CLCS. With Russia and the United States as Security Council members, such a push would carry significant weight.

International law is, of course, not the only solution. Efforts at reducing carbon dioxide emissions can help slow melting in the Arctic. Regional cooperation, through intergovernmental organizations and joint scientific research, can also help to promote peace. NATO should work to develop a collective and robust plan for Arctic security. Nevertheless, international law provides the clearest way of resolving disputes. States must take advantage of it now before it’s too late.