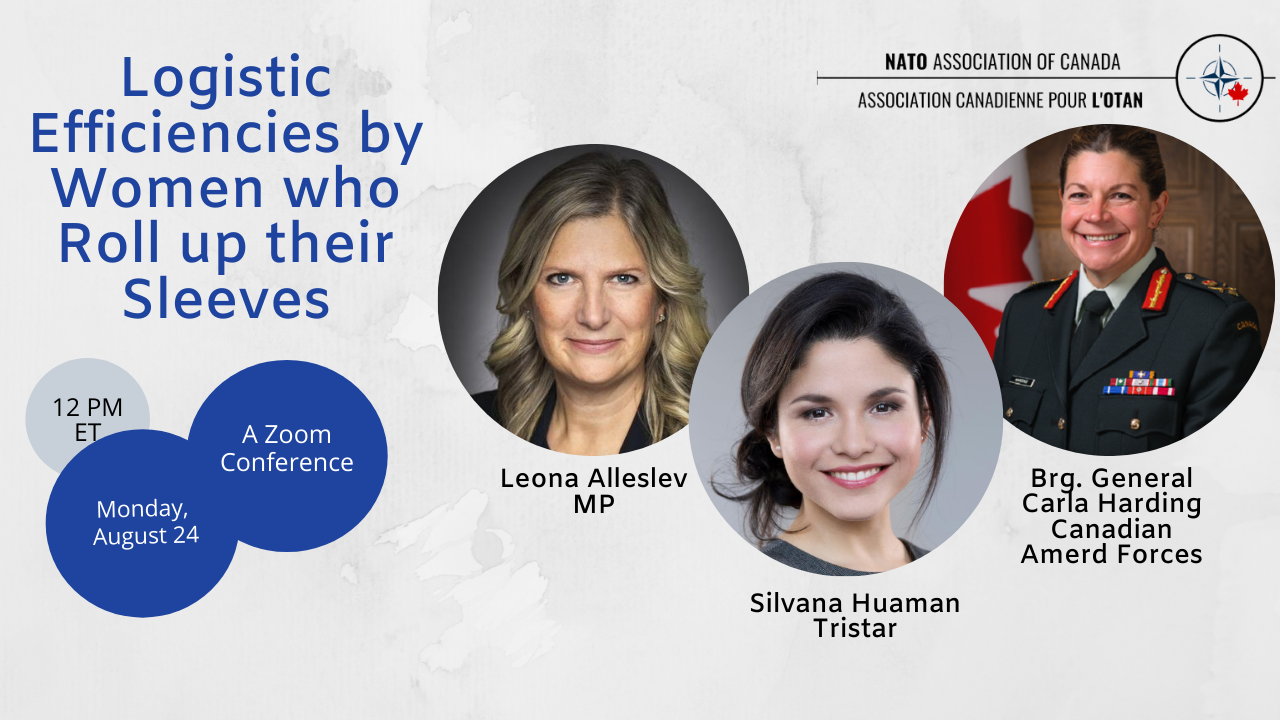 On August 24, 2020, The NATO Association of Canada proudly hosted a discussion with MP Leona Alleslev, Silvana Huaman and Brigadier-General Carla Harding. These three experts pressed on issues relating to how the government, corporate Canada and military had to address logistical challenges to address the great challenges posed by the current health crisis, and how they were able to work together to the benefit of Canadians.

Leona Alleslev was first elected to the House of Commons in 2015 and was re-elected in 2019 as the Member of Parliament (MP) for Aurora—Oak Ridges—Richmond Hill, Ontario. After being elected in 2015, Leona was appointed as Parliamentary Secretary to the Minister of Public Services and Procurement. Leona later served on the National Defence Committee, Foreign Affairs and International Development Committee, the Citizenship and Immigration Committee, and was Chair of the Canadian NATO Parliamentary Association. In 2018, Leona was appointed Shadow Cabinet Minister for Global Security.

In November 2019, Leona was appointed as Deputy Leader of the Official Opposition and shortly after named Shadow Cabinet Minister for Foreign Affairs. She currently serves on the Foreign Affairs Committee and the Special Committee on Canada-China relations. She is also a member of the Canadian NATO Parliamentary Association.

Prior to serving as your MP, Leona was a Canadian Air Force Officer, Senior Manager, and entrepreneur. Leona has held leadership positions in the Department of National Defence, as well as senior managerial roles with IBM Canada and Bombardier Aerospace. She served on the Aerospace Industry Association of Canada, the Ontario Aerospace Council and the Women in Aerospace Association joint government/industry change initiatives. She has also owned and operated two small businesses.

Leona earned a B.A. (Honours) in History and Political Science from the Royal Military College of Canada in Kingston and received her Queen’s Commission to serve as an Air Force Logistic Officer. She is fluent in both official languages-French and English. She has lived all across Canada but Leona now calls Oak Ridges her home, where she has lived for the past 15 years with her husband Ted, and their two children Christopher and Hillary.

Silvana Huaman is an international marketing professional with broad experience supporting dozens of companies in developing new business throughout Canada. As a lead generation expert, Silvana has contributed to the success of organizations in economic development, education and banking. She specializes in comprehensive digital programs that support the Tristar team’s sales efforts. Silvana co-founded Tristar working in developing it’s operations and validating product-market fit. Silvana earned her International Business and Finance B. Comm. from Concordia University, in Montreal.

Born and raised in small-town Saskatchewan, Brigadier-General Harding joined the military out of high school in June 1990. She enrolled as an Army Supply Officer, with a view to completing her education at Royal Military College in Kingston. Upon graduation from RMC in 1994, Brigadier-General Harding was posted to 2 Service Battalion in Petawawa, where, throughout the years, she is proud to have served alongside the exceptional soldiers of 2 Canadian Mechanized Brigade Group and the Army writ large, both at home and abroad.

While at 2 Service Battalion, Brigadier-General Harding had the privilege of leading the superb technicians and soldiers of the unit as a platoon commander, company commander and culminating as the 24th Commanding Officer of the Battalion from 2013-2015.

In 2001, just prior to 9/11, Brigadier-General Harding was posted to the National Defence Logistics Coordination Centre, which was the start of many joint logistics opportunities throughout her career. In addition to supporting deployed operations as both a J3 and J4 desk officer, she also has operational experience with NATO in Bosnia, two tours in Afghanistan and a year-long posting to Israel and Palestine as a member of the United States Security Cooperation team. Key highlights of her career include postings as the Army Logistics Career Manager, Army G4 Operations and, most recently, as Commander of the Canadian Forces Joint Operational Support Group. Her passion for tactical and technical excellence is a driving factor for demanding the best from the soldiers, sailors and aviators who serve within the greater operational support community.

Brigadier-General Harding has a Masters of Arts in Defence Management, Security and Policy, a Masters in Defence Studies and most recently a Masters of Science in National Resource Strategy. She is a graduate of the Canadian Forces College and a Distinguished Graduate of the Eisenhower School. She was awarded the Order of Military Merit in December 2015.

Brigadier-General Harding currently serves as the Director General Support at Canadian Joint Operations Command. On a personal note, she is an avid traveler, often pairing outdoor adventure off the beaten track with a quest for the local foodie experience.