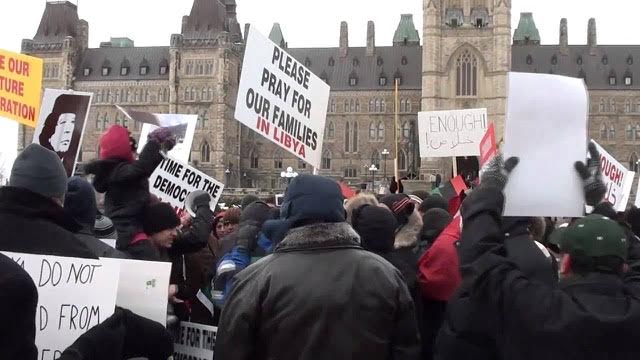 As ISIS has come under increased pressure in Syria and Iraq, they have now turned to Libya and taken advantage of the country that has been ravaged by five years of civil war and in the midst of the chaos, gained a strong foothold. These advancements have caused further destruction to Libya and opened up another channel for migrants attempting the dangerous journey across the Mediterranean toward Europe, meanwhile Western countries are only now struggling to find solutions to this crisis.

After seizing power in a coup in 1969, Muammar Gaddafi kept his grip on Libya by skillfully mixing mafia-style punishment with tribal infighting, playing one group against another. Then as the Arab Spring swept through the Middle East in 2011 a revolt against the leader surged, with the support from NATO allies. The NATO campaign in Libya was initially aimed at saving civilians in Benghazi threatened by Libyan government forces, however the objective soon expanded to toppling Gaddafi. In the case of Libya, the opposition was wholly dependent on NATO military support and would have been rapidly defeated by pro-Gaddafi forces without it.

The revolution was a success yet with Gaddafi captured and executed by rebel groups, the Western powers had no plan in place for Libya once the dictator was gone and the architecture of his regime destroyed. Most were determined to avoid any hints of nation building or sending troops on the ground. Under Gaddafi’s rule all power was concentrated in his hands and so in his place rival militias battled for dominance in the country thus creating a power vacuum which allowed extremist groups such as the Al-Qaeda-linked Ansar al-Sharia to flourish.

Foreign involvement in Libya was further weakened after the attack on a U.S. diplomatic compound in Benghazi in September 2012, where four Americans were killed. Most recently ISIS has emerged and exploited the environment of lawlessness and instability.

In a recent interview, Obama spoke on the problems facing Libya when asked about his “worst mistake” the President replied, “probably failing to plan for the day after, what I think was the right thing to do, in intervening in Libya.” It is not the first time President Obama has expressed regret over Libya as he explained that the operation went as well as he had hoped, but Libya was now “a mess”. The president also laid much of the blame on the UK and France for encouraging military action but not following through with support afterwards.

At the public level, wars against foreign dictators are consistently far more popular than nation-building operations and the notion continues to prevail that all ills can be attributed to the authoritarian regime and through its removal democracy will be able to flourish. This was the belief after the fall of the Taliban in 2001 and Saddam Hussein in 2003. The pattern continued in the cases of other Arab Spring countries with Syria and Yemen currently ravaged by warfare while Egypt and Bahrain are being ruled by authoritarian governments more brutal and dictatorial than anything that had gone before.

The recent surge of ISIS in Libya is due in part to efforts to stem the flow of recruits into Syria and Iraq. The country’s porous borders allowed jihadis to easily enter Libyan territory from neighbouring Tunisia as well as from the south and the east. In January 2015, it launched its first major attack in the country, killing 10 people in a car bomb and shooting attack at the Corinthia Hotel in Tripoli.

The Pentagon estimates ISIS has nearly doubled its numbers and now has 6,000 fighters, mostly foreign, in Libya, far fewer than in Iraq and Syria. Yet they have cemented their hold on the coastal city of Sirte, wiping out opposition and the group is “currently the most significant political and military actor in the region”. Libya now represents ISIS’s largest power centre outside of the caliphate’s borders, with many coming from sub-Saharan Africa traveling through Sudan to join ranks, confirming fears that the Libyan ISIS branch is seeking to draw recruits from other parts of the continent.

While the Libyan armed forces recently pushed the militant group out of Derna, it has been reported that the Derna Mujahideen Shura Council (DMSC), an al-Qaeda affiliated group, was responsible for driving militants from the city. This same extremist group sabotaged elections in 2014 and were responsible for bringing ISIS to Derna, working together to control the town until ISIS killed one of their leaders last year.

It has become increasingly apparent that Western powers have no realistic plan for Libya and are united solely by the two goals of fighting ISIS and breaking the vicious circle of migrants from Libya to Europe. In December 2015 the U.N. created a new government in Libya called the General National Assembly (GNA) headed by Fayez al-Sarraj, who landed in Tripoli on March 30. This has left Libya in the unusual position of having three rival governments and the GNA has been slow to assert control over the factions that control the country’s east, where authorities have refused to recognize the new political body.

With opponents already accusing Sarraj of being a tool of the West, he has held off from formally requesting Western help, including allowing the West to operate in Libyan sovereign waters. While military and logistical support is also pledged to GNA, it is unthinkable that any of the Western powers will be willing to deploy military forces on the ground to fight ISIS. Once again the NATO allies are committing minimal resources with the hope of achieving success in combating ISIS and stemming the flow of migrants, two of the most immediate crises facing the Europe today.