For over a week, Egyptians in Cairo protested in Tahrir Square for the resignation of President Mohamed Morsi, a full year into his 4-year presidency. Since the start of the protests, Egypt’s powerful and largely respected military issued a 48-hour ultimatum, calling on the Islamist President to reconcile with the opposition, or face the imposition of a military-led road plan for the country. In a show of solidarity and support with those gathered in Tahrir Square, the military flew helicopters overhead, to the cheers of those gathered below. The Canadian government closed its embassy in Cairo amid fears of violence. Now, the military has ousted the President, separated supporters from both sides, and set in motion a plan for early elections. 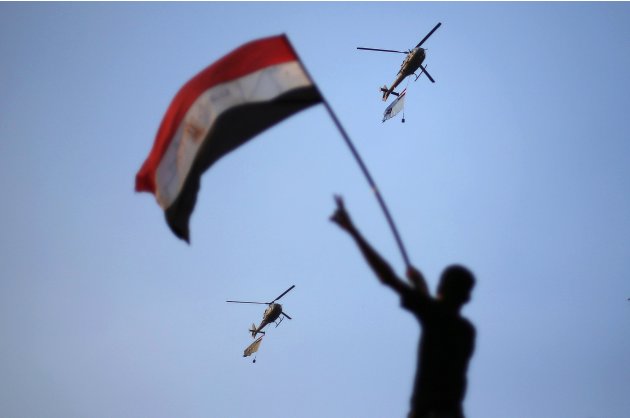 While visiting Egypt this past May, I found the dissatisfaction with Morsi, the Constitution, and Egypt’s direction to be evident. The President would talk about the past, but never really looked to the future, and for many young people, this was his greatest failure.

Egyptian news media and social networks have reported Morsi as a self-aggrandizing leader, whose political party, the Muslim Brotherhood, has behaved as if drunk with power, pursuing an Islamist agenda far more doggedly than solving the country’s economic problems.

Since the very beginning, Egypt’s parliament has not functioned properly, with a series of court resolutions determining electoral problems, and other illegalities. Tour guides allege the Morsi government intended to kill tourism, a critical economic sector, and tourist numbers are now at an all-time low. The multitude of diplomatic and political blunders has not helped Morsi or the Muslim Brothers, with unbecoming behaviour during a televised interview with Australia’s former Prime Minister Julia Gillard, and appointments of former extremists to governorships of touristic provinces such as Egypt’s Luxor.

It would seem that dissatisfaction with the politics of the day is reaching a tipping-point, with clerics warning against a Civil War, the military planning for a post-Morsi Egypt, and young people believing that many of their liberal, revolutionary values have become sidelined since the presidential elections.

Cairo this past May was very peaceful. There were no protests to hear of, and there were no complications getting around the city or to the famed Egyptian museum. Tahrir Square was completely empty, and surprisingly the cleanest part of the city besides the oasis of al-Azhar Park. The only indication of some sort of political struggle were the many murals depicting satires of the ousted President Mubarak, Morsi, and the then-much hated Supreme Council of the Armed Forces (SCAF), as well as the many concrete cinder-blocks blocking off a few streets to prevent protestors from potentially torching government ministries. Cairo seemed quiet, but politics was in everybody’s mind, and on everyone’s lips. It was clear that Egypt’s revolution of 2011 is far from finished.

No one I talked to was happy with the Muslim Brothers or with President Morsi, stating that they wasted precious momentum in implementing reforms, while focussing on their opponents in the media and in parliament – Egypt’s version of John Stuart, Bassem Youssef, is the best known example. It seemed as if the younger generation belonged to a completely different subset of Egyptians; young and liberal, yet politically aware, mobilized and interconnected, and most importantly, in opposition to the Islamists, whose establishments initially began as houses of goodwill across Egypt. Few could have dreamt of a better platform for a re-entry into politics following the ouster of Mubarak, but who could have expected that political Islam was not going to receive unanimous support.

Cairo has been dubbed, “the city of a thousand minarets,” but it is also a city of even more contrasts. Garbage collection functions unreliably, there was not a single working street light to speak of, though drivers seem unfazed, small shopkeepers entice aggressively side-by-side with luxurious shopping malls, well-dressed university students of both genders saunter past those in traditional jellabiyas, and middle-class high-rise apartments encircle the structures of the infamous City of the Dead – a cemetery, where the tenants are very much alive.

The problem in post-Mubarak Egypt was that Egyptians had an uneasy choice in the presidential elections. In those milestone elections, it was really a choice between Ahmed Shafiq of the old guard, and Mohamed Morsi of the Muslim Brothers. Morsi won, and now he’s out.

Everyone whom I carefully asked about their choice in those fateful elections stated that they voted for Morsi to prevent Shafiq from coming to power and pardoning Mubarak, hardly a vote of confidence in Morsi’s abilities or a mandate to rule. After the coup, it seems automatically an important lesson learned – democratic legitimacy does not connote a mandate to rule. It took a year for Morsi and Islamists to disappoint, and now Egyptians want change, but without time frames set forth by the military, the road seems unclear.

The truth is that the values of the Egyptian revolution of 2011 were never really realized, and the young people who fuelled the protests never really satisfied. Police abuse, economic hardship, discrimination, sexism, and widespread corruption continue to this day, as the economy teeters on the brink and the state sheds its trappings of secularism. Unfortunately, statements by the armed forces focussed on restoring inclusive stability, without the mention of democracy, which may or may not be an indication of the road to come.

Now with the military posturing against the Islamists, clearly showing its allegiance to the people and perhaps mending ties following the many anti-SCAF demonstrations, it remains to be determined whether the military is in fact as united as it appears, and whether violence can be avoided. What is clear is that a state of power bipolarity exists in Egypt, with the military wielding the most in real terms. The Egyptian revolution is not finished, many of the hopes and promises of the revolution remain unrealized. Whatever the developments in the coming days, the expectations of many liberal-minded Egyptians remain high, while their tolerance for under-delivering on the promises of the revolution is beyond low.

Was Egypt really that quiet? Next week’s article will recount experiences from a demonstration in the southern city of Aswan, and the trials of Egypt’s often discounted religious minority – Egypt’s Coptic Christians.

The Return of the Old Guard in Egypt

Samir Mourani examines the role of Egyptian and Israeli elites in the illicit trade of natural resources.

Chris Edwards on the possibility of renewed conflict between Sudan and South Sudan.

France has launched a wide-ranging mission to combat terrorism in the Sahel region, but Paul Pryce expresses some concern about the lack of a state-building component.