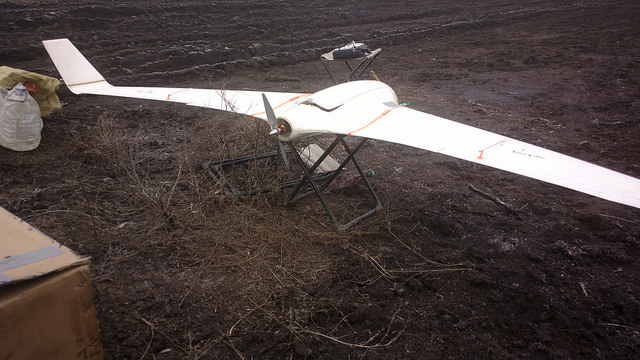 Last week, the BBC reported a United States ally had used a $3 million Patriot missile to shoot down a $200 quadcopter. The Patriot missile, which travels five times the speed of sound, inevitably took down the quadcopter that usually holds a top speed of 80 km/h in a tremendous case of overkill. Justin Bronk, a researcher at the Royal United Services Institute, describes the case by saying “It certainly exposes in very stark terms the challenge which militaries face in attempting to deal with weaponized cheap and readily available civilian technology with extremely expensive, high-end hardware designed for state-on-state warfare.”

Although the drone had not been modified, reports of weaponized civilian drones on the battlefield have increased throughout the past few years. In January, photos show the Islamic State’s modified consumer drones which were used to carry explosives while defending Mosul, Iraq. The above drone, which costs less than $1000, has the ability to fly multiple miles for up to 30 minutes, making it an affordable option for militant groups. On the front lines in eastern Ukraine, Russian-separatists have also reportedly weaponized civilian drones by attaching hand grenades to the devices.

Drones are also being used on the battlefield to provide soldiers with surveillance and target acquisition capabilities. Fighters in Libya, Iraq, Syria, and Ukraine are using civilian drones to locate enemy positions to fire artillery and mortars more accurately.

However, it is not just militant groups who are creating weaponized civilian drones. In 2015, an 18-year-old by the name of Austin Haughwout from Clinton, Connecticut uploaded a video of his ”flying gun”. Haughwout mounted a semiautomatic handgun to his quadcopter, which resulted in a Federal Aviation Administration investigation.

In the Armament Research Service Special Report on emerging unmanned threats, one of the key threats surrounding civilian drones is the possibility of a ‘bird strike’ type attack where a drone intentionally flies into the engine of a passenger aircraft. Another major threat comes with the possibility of chemical, biological or explosive attacks on events with large crowds. Further highlighting this, the use of drones could act as a decoys or distractions within a larger, more complex attack.

With the relative ease and affordability of creating a weaponized drone from commercial parts, the need for anti-drone systems increases. Recently, police in China successfully shot down a quadcopter using their anti-drone gun. The technology uses radio-interfering signals to interrupt the drone’s flight. “Commercial drones tend to operate in the 2.4 gigahertz range, they are relatively easy to jam,” said Bronk, “they are difficult to spot and shoot down, but if you have jamming capabilities you can deny them airspace.” The anti-drone device costs roughly $36,200 and will be used as a countermeasure to China’s thriving drone industry which has resulted in delayed flights and security risks.

An Israeli tech firm has designed a system to detect, identify, track, and neutralize drones. Rafael Advanced Defence Systems has created Drone Dome, which uses radar/radio jamming systems to provide defence in a radius of up to 3 kilometres. The system uses tactical air-surveillance radar and electro-optical sensors to locate UAVs. “The data is combined and correlated and alerts the operator of the hostile UAV. The system initiates either automatic interference operation or manual operation by the operator,” the company said. “When the threat reaches the neutralization area, the hostile drone is neutralized by the activation of directional GNSS and the RF Inhibitor/Jammer system”.

Indeed, the use of weaponized civilian drones presents an innovative challenge for police, prisons, security forces, and militaries around the world. However, the challenge has inevitably resulted in a growing drone defence industry. As the use of drones become more popular, security specialists will be forced to keep up with appropriate countermeasures.

Photo: a commercial drone retrofitted for military use somewhere in Ukraine (2016) by teteria sonnna via Flickr. Licensed by CC BY 2.0.