Social media provides the opportunity for a close-linked populace that comes together to discuss issues pertaining to national improvements. It can be a forum where nationalism is trumpeted, solidarity flourishes, and social movements are formulated. In China, specifically, the Internet revolution helped the Communist Party improve governance in many ways. It enabled China to reduce isolation of rural spheres, and keep government officials more accountable. Also, the government has increased dialogue with citizens resulting in effective responses and an impressive demonstration of adaptability.

The Internet can be both an opportunity and a threat to the Chinese Communist Party (CCP). Alternatively, the Internet played a significant role in bringing down the governments of the Arab Spring. Understandably, it can also be perceived as a threat to governments’ power.

There are approximately 523 million Internet users in China, the majority in urban areas.  Social networking sites are the most difficult for the government to censor, and 300 million people spend 40% of their time connected to them. Chinese social media is unique: there is no Facebook, Twitter, or YouTube. Instead, there are alternative sites, such as QQ, Renren, Sina Weibao, WeiXin, and Douban. LinkedIn, however is allowed in China. In these sites, citizens post, blog, and discuss issues such as health, governance, the provision of public services, and natural disasters.

This widespread use of social media results in a huge amount of content for the CCP to sift through daily, making it more likely that some information may slip through the cracks. There is a substantial amount of fragmentation for these sites, forcing the CCP to become flexible and innovative in its censorship. The CCP conducts censorship through disconnecting, surveillance, intimidation, forced disappearances, and domain-name controls (where citizens must register, making anonymity not an option). The Central Commission for Discipline Inspection and Ministry of Supervision are the two major government agencies that control this censorship process.

Hu Jintao, former Chinese leader, emphasized that close ties to the people is the CCP’s priority, and that this makes the Internet essential. Improving the livelihoods and connection of rural populations has consistently been a priority in the No. 1 Document. China is a vast state with diverse populations. A large focus of their political reforms has been to include participation from more remote areas. 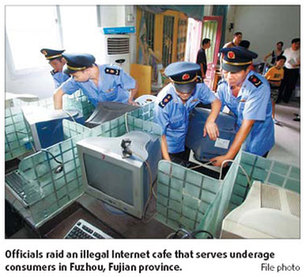 The CCP is actively reaching out to populations that do not currently have Internet access, as can be seen with a government project that would build centers for rural citizens to voice their opinions. Another example is the CCP installing Internet in rural schools to try and bridge the education gap between the rich and poor in China, the rural and the urban. This allows rural citizens to political discussion forums, be included in cyber-forums where they can participate in online government surveys, and connect with others also concerned with issues like the environment and health services across China, even if still closely watched. In this way, they can be more included in the policy-forming process and Beijing can be informed of their priorities, needs, and opinions.

The Internet has made previously untouchable government officials vulnerable to critique. Senior government officials in Guiyang engage in forums with the public which are regularly broadcast via the Internet. A Ruijin party chief, Chen Xiaochun, made his cell-phone number available to the public. Increased transparency can be seen in Jiangsu Province. If officials do violate protocol or do not finish their tasks efficiently with specified allotted periods of time, a red or yellow light will flicker on the computer monitoring software system. These actions are occurring at a time where many Chinese citizens are concerned with dishonesty. This is a substantial reform for the CCP since government officials are now more approachable and susceptible to the opinions of citizens. The CCP uses the Internet as a direct tool to curb other kinds of corruption: there are forums where citizens can tip off corruption, and when a government official is punished or fired, the CCP publishes this information online as well.

An example of collective action aided by the Internet and which resulted in political change is the Wukan village confrontation. Citizens protested against local officials who they accused had illegally taken possession of their farmland. Villagers barricaded Wukan for ten days, and in the end the CCP granted Wukan residents democratic elections for local officials. The Internet aided the plight of Wukan villagers, as the situation was broadcast online, giving them a substantial number of sympathizers. The CCP is proving increasingly responsive to social discontent concerning government corruption, especially at the municipal level.

The Internet revolution has enabled the CCP to monitor and measure the reaction to government performance, and at times forced it to be flexible and respond to changes as voiced by public opinion. The average person now has a better chance to speak, be heard, and be a part of policy change in cooperation with the CCP.

Beyond Trade: Establishing a European Presence in Asia

By: Jason Naselli from the Atlantic Community – Berlin. At Issue: The European Union must reach out to Asian partners and become a credible player on issues other than trade. A strong EU-Asia policy can contribute to stability and advance Europe’s overall political, economic, and security interests. Atlantic Community members and regional experts believe that the European Union Read More…