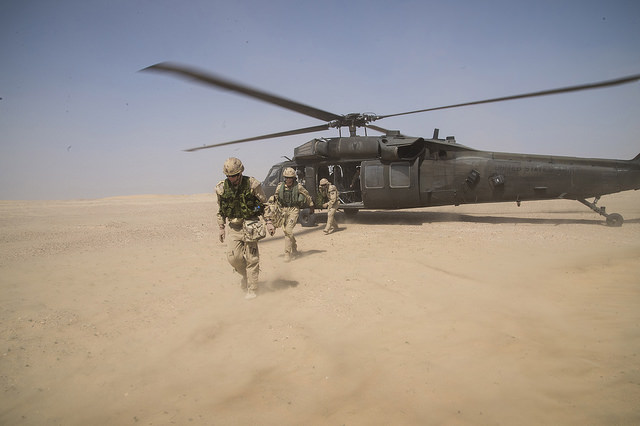 In early March 2017, reports surfaced of the presence of US soldiers and armored vehicles in Northern Syria taking part in the military campaign to retake the Islamic State’s capital of Raqqa. The vehicles were on route to the Syrian village of Manbij which had recently been liberated from ISIS troops by the US-backed and Kurdish-dominated Syrian Democratic Forces (SDF). This report comes two weeks after the Defence Department’s announcement that it was considering sending ground forces to northern Syria to combat ISIS.

In 2015, US forces began training, advising and equipping Syrian rebels including the SDF. However, according to Army Times, the troops that entered Syria earlier this month are members of the 75th Ranger Regiment and a Marine artillery unit. As CNN reports, instead of assisting the SDF in its push towards Raqqa, the Ranger detachment’s highly visible presence in Manbij is to deter Turkish, Regime and Russian forces present in Northern Syria from inadvertently targeting the Marine artillery unit tasked with providing fire support to the SDF push towards Raqqa. That being said, as a special operations unit focused on conducting raids behind enemy lines, the Rangers may be used on the frontline to spearhead the SDF offensive against ISIS. According to Air Force LT. Col. John Dorrian “The exact numbers and locations of these forces are sensitive in order to protect our forces, but there will be approximately an additional 400 enabling forces deployed for a temporary period to enable our Syrian partnered forces to defeat ISIS in Raqqah.”

Indeed, the presence of US troops in Syria adds to the already chaotic mix of loyalist forces and rebel groups within the country. Last week, Syrian President Bashar al-Assad described US forces as “invaders” by saying “any foreign troops coming to Syria without our invitation or consultation or permission, they are invaders, whether they are American, Turkish, or any other one”

With the US increasing involvement within Syria, the Canadian Armed forces have begun reviewing options for an operation in Syria. Roughly 800 Canadian troops are currently involved in Operation Impact, Canada’s contribution to the US-led Coalition of 17 countries tasked with counter-terrorism. According to the CAF website, “Under Operation IMPACT, the CAF conducts air operations, provides training and assistance to the Iraqi security forces, provides capacity building capabilities to regional forces, provides medical services to Coalition forces, and supports the Coalition with highly-skilled personnel.”  Since December, CAF elite Special Forces from JTF2 have been training, assisting, and advising Iraqi Kurdish fighters near the Syrian border in northwestern Iraq. Canada’s role in Syria has decreased since last spring, when Prime Minister Justin Trudeau decided to withdraw CAF CF-18 fighter jets which were also involved in airstrikes in the Syrian theater.

Canada’s increased involvement in Syria to counter ISIS militants looks more likely as US President Donald Trump has called for an expansion of the war on terror. Earlier this year, Trump introduced the idea of “safe zones” in Syria, highlighting a shift away from Obama’s cautious approach within the region. Matthew Fisher, an international affairs columnist with National Post, suggests the CAF could be involved in Syria by providing JTF2 troops in an advisory role. He also points to the possibility of Canada being asked to provide “boots on the ground” to assist civilians within Trump’s proposed “safe zones”. A decision surrounding Canada’s future role within the region is expected soon as Iraqi forces continue to liberate Mosul from ISIS, pushing the terrorist organization further underground.