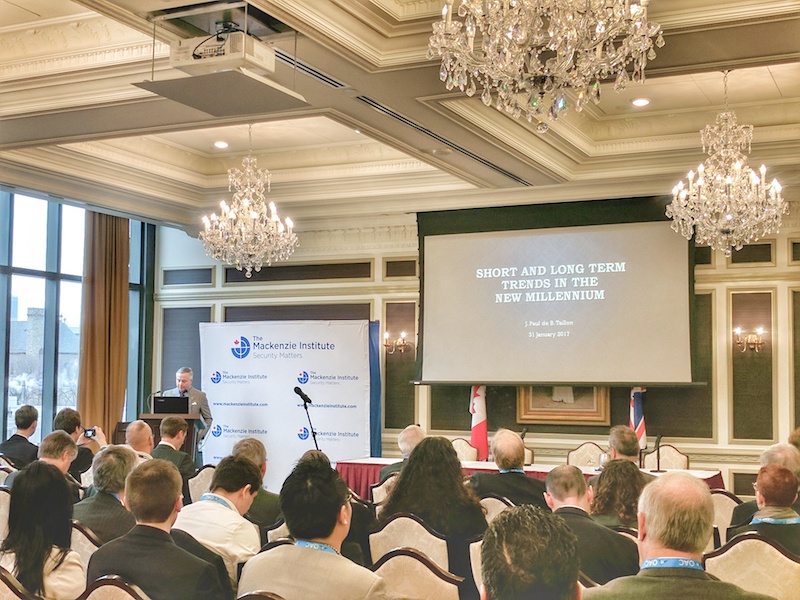 Last week, The Mackenzie Institute hosted a conference at The Royal Canadian Military Institute (RCMI) titled, “Canada’s Defence Policy in Review: The Geopolitical Context 2020-2050.” The conference featured Col (Ret’d) Dr. J. Paul de B. Taillon as the Chair, and hosted panels composed of some of the most influential people in the defence and security communities.

Taillon opened the conference with a comprehensive overview of the short-term and long-term trends that are emerging today, and that must be dealt with in the coming years. He touched on topics such as political instability, globalization, resource scarcity, and climate change, as well as possible changes to the global power structure. Moreover, he believes that the United States may lose its global hegemony to China, but will nevertheless remain the top military power in the world.

Interestingly, he also mentioned that in the coming years, Africa and Asia will account for 90 per cent of all urbanization. Given that urban centres are hotspots for extreme ideologies when there are inadequate employment prospects for young people, Taillon says that this will place immense pressures on governance to address these issues before they spell disaster for global security. This will become an ever-pressing issue as the current trend of working-age populations continues to rise in Asia and Africa, and decline in the West.

On the topic of the global economy, Taillon also shared his insights. He stressed that the world, for all intents and purposes, was still reeling after the 2008/2009 financial crisis. Indeed, inequality is on the rise, and according to Taillon the gap between rich and poor states will only increase as advanced technology, automation, and artificial intelligence gain prominence. If left unchecked, he says that extreme religious or nationalistic ideologies will be employed to foster support for the governments of these countries, and may lead to catastrophe in the future.

The first panel discussed the current state of the global security environment, and featured Richard Fadden, a former Director of CSIS, and Dr. Barbara Falk, Associate Professor at Canadian Forces College. Fadden stated that the world is no longer facing an existential threat, similar to the Cold War, and that Canada is more or less sheltered from most conflict. However, the election of Donald Trump to the US Presidency coincides with a rise in uncertainty felt worldwide, and that there is a need to form and strengthen alliances in response. He also proffered a number of pressing issues of his own, stating that cyber-warfare is quickly becoming a very effective means of achieving a nation’s strategic objectives. For instance, China is suspected of having stolen approximately $1 trillion USD of intellectual property through the use of ceaseless cyber-attacks.

The panel also discussed how the approach to terrorism has changed in the 15 years since the terror-attack on September 11, 2001. Since then, trillions of dollars have been spent on anti-terror measures which, the panel points out, could have been better utilized funding social programs and community-outreach initiatives. As a result, people residing in terror-affected nations endure more restrictions, especially on travel, than ever before in their lives. Although terrorism is a low threat to human life, it is tremendously successful because it generates fear. As a result, it often discourages politicians from downplaying the threat to their constituents and implementing sensible, rather than reactionary, policies regarding terrorism.

The second panel, “An Outside Perspective of Canada’s Footprint in the Global Landscape,” featured H.E. Nicolás Lloreda-Ricaurte, Ambassador of Columbia to Canada; Former Ambassador of Denmark to Lebanon, Syria, and Jordan, Rolf Holmboe; H.E. Kenjiro Monji, Ambassador of Japan to Canada and certified Sake Samurai; and H.E. Kārlis Eihenbaums, Ambassador of Latvia to Canada. The panel discussed perspectives on defence from their respective areas of the world: South America, the Middle East, Asia, and Europe. The panel emphasized a need for greater co-operation with Canada in the future, citing key examples of when such cooperation yielded favourable results.

After lunch, the third panel discussed Canada’s Arctic security. The first speaker was Dr. Whitney Lackenbauer, Professor at St. Jerome’s University in Waterloo. He was followed by Major Tony Balasevicus and H.E. Anne Kari Ovind, the Ambassador of Norway to Canada. Lackenbauer quickly quelled any doubt as to whether Canada’s Arctic security was in any way threatened. He said that the Arctic was simply not a priority for Canada, citing that the government’s Arctic security policy has not changed significantly since the 1990s, and is unlikely to change after last year’s Defence Policy Review.

As for the Russians, Lackenbauer says that they are not particularly interested in the natural resources there, or the boundary dispute, and it is unlikely that they will be an aggressor in the Arctic. Consequently, the Arctic is not a priority for NATO either, despite pressure from the Canadian Government.

Other nations, such as Norway, Denmark, and Greenland, also have a stake in the Arctic. If NATO is unwilling, for the time being, to step in and settle the dispute, the question arises of whether Canada is able to step up to the plate and work towards a peaceful solution. According to the Norwegian ambassador, the answer seems to be yes: The Arctic Council has been a smashing success so far, and continues to show a spirit of co-operation, diplomacy, and the pursuit of global peace.

The last panel of the day assessed the impacts of global terrorism, and was composed of Alan Bell, Dr. Christian Leuprecht, and Dr. Veronica Kitchen. According to Bell, who has 22 years of UK Special Forces experience, extremism is the single most pressing threat to national security. Indeed, he states that in 2016, global terrorism has increased by 25 per cent from the previous year. Moreover, “lone-wolf” terrorism is also on the rise, and it is proving to be particularly difficult to prevent. Nevertheless, Bell says, Canadians are well-insulated from the threat, but have grown complacent as a result; “until something terrible happens, nothing will change.”

However, the world is changing, and so too is the nature of security. Many in the West hailed the Arab Spring as a grassroots movement that toppled repressive dictators, but they failed to recognize that without improved institutions, the new leaders were often worse. As a result, people in Arab countries are identifying more with their religious sect or tribe rather than with their country, causing conflict to erupt. According to Bell, by 2020 it is expected that 75 per cent of Arabs will be living in conflict areas. These conflicts will only be made worse by the continued destruction of the infrastructure necessary to sustain a functional, modern society.

War is also changing. Bell asserts that the use of small, highly-trained units is becoming the norm around the world simply because it is cost-effective. He says that Canada needs to follow suit; there is no point in continuing to focus on “full-spectrum warfare” on such a limited defence budget. Instead, he suggests that the Canadian Forces focus on what matters, and what works. For right now, that means more investment in space, cyber-space, and special operations.

Photo courtesy of The Mackenzie Institute.