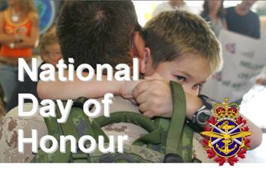 Canada’s mission in Afghanistan was commemorated on May 9, 2014 with the National Day of Honour. This event evoked a great deal of public debate across Canada. Some consider the mission in Afghanistan to have benefited Canada, while others say it did more harm than good. Regardless of this debate, it is clear that Canada’s involvement in Afghanistan increased its standing and influence within NATO.

In the aftermath of 9/11, Canada decided to join the NATO-led invasion of Afghanistan, on October 7, 2001. Prior to the Afghan War, Canada’s role in the international arena had been declining. Since the end of the Second World War, Canadian foreign policies and initiatives had been designed to support and maintain peace and order in the international political system through participation in multilateral institutions, such as the United Nations. These values were demonstrated by Canada’s commitment to peacekeeping in areas of conflict around the world. However, as the Cold War drew to an end, Canada’s role on the international stage began to diminish. By 2008, Canada ranked 51st in terms of its human contribution, equivalent to less than one percent of the UN peacekeeping force, while its financial contribution fell from 94 million dollars to 15 million dollars. By 2013 Canada’s involvement in peacekeeping continued to be minimal.

In other words, Canada’s international presence through the UN was quite limited. However, in 2001, Canada decided to take part in the Afghan War. This effort has bolstered Canada’s international image, increased its reputation inside NATO, while still continuing to reduce its UN contribution and peacekeeping efforts up until today. As a result of its intervention in Afghanistan Canada’s engagement is no longer limited to international peacekeeping missions. It has shifted its focus to combat operations as a way of promoting and maintaining peace. Instead of seeking to maintain peace between two opposing armies, Canada engages in military combat to restore peace and uphold international law. As a result of its active engagement in Afghanistan military operations, Canada’s image in the international arena has gained recognition and prestige inside NATO.

When Canada decided to join the NATO-led invasion of Afghanistan there was a clear consensus in the Chrétien government that the war would be beneficial to Canada by increasing its standing within NATO. In fact it was a Canadian diplomat who suggested using Article V of NATO to approve the invasion. For Chrétien, Canada was engaging in the invasion to fight terrorism and promote the security of individuals: “This [9/11] was an act of premeditated murder on a massive scale with no possible justification or explanation—an attack not just on our closest friend and partner, the United States, but against the values and way of life of all free and civilized people around the world.”

The war provided Canada an opportunity to demonstrate its military strength inside NATO, uphold international law, while at the same time gaining a leadership role in international affairs, something it had been unable to achieve for quite some time. By February 2002, Canada had deployed the fourth largest contingent of troops after the United States, Germany, and Turkey. By January 2003, U.S. Secretary of Defense Donald Rumsfeld requested that Canada take command of the ISAF (International Security Assistance Force) operation in Kabul. By 2004, Canada had deployed the third largest military force in Afghanistan. This allowed Canada to gain influence in NATO itself and in the U.S. The U.S. government now perceived Canada as a major ally as a result of its commitment in Afghanistan. As David G. Haglund (Political Science Professor at Queen’s University) has stated: “Canada continues to be regarded in Washington and elsewhere as one of the most stalwart of allies, and no longer finds itself being singled out…as one of NATO’s leading deadbeats…”

Formerly, Canada had been demonstrating its commitment to resolving international issues in a variety of ways, but now it was taking on more of a leadership role in the international community. As Prime Minister Harper stated: “We live in a dangerous world and we have to show leadership in that world, and that’s what we’re doing. I don’t think there’s been a better example in decades of Canada really standing up, going to the front line, articulating our values, not just our opposition to terror, our advancement of democracy, but basic humanitarian values, development…” This change of approach also sheds light on Canada’s decision to extend its involvement in Afghanistan.

Some have wondered why both the Liberal and Conservative governments chose to extend Canada’s military engagement in Afghanistan. The answer lies in the fact that Canada had become a major international player in Afghanistan. Although both political parties share different ideologies, they both agreed to extend Canada’s involvement, since Canada was seen as a leading state in Afghanistan. Canada had taken on a leadership role in the region, and was perceived as having a responsibility to remain until goals were achieved. In other words, Canada has re-positioned itself in the international community as a major player in international affairs, ready to uphold international law. As Prime Minister Harper stated “You can’t lead from the bleachers….I want Canada to be a leader…A country that really leads, not a country that follows.”

As a result of its participation in combat rather than peacekeeping operations, Canada has gained international prestige within NATO and in the international community and assisted with the enforcement of international law. Canada efforts in Afghanistan can help explain why a Canadian general led the NATO air assault in Libya in 2011, and why Canada is currently involved with NATO in Ukraine. These recent and current leadership roles inside NATO can be linked to Canada’s efforts in Afghanistan.