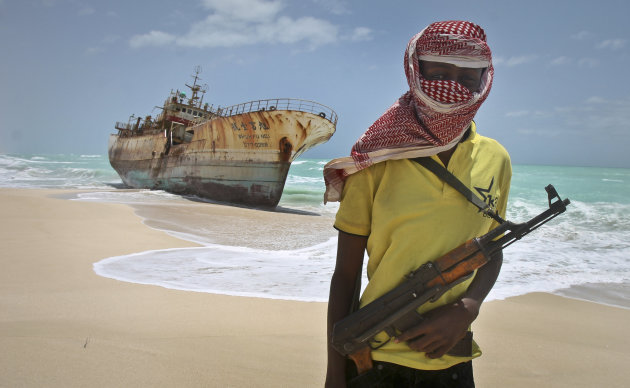 Like many African countries, Somalia is an artificial creation born out of European imperialism. The country as it exists today is comprised of a former British Protectorate and an Italian colony, the two of which merged in 1960. Since its conception, Somalia has been tainted by a history of poverty, violence and instability. It has been involved in numerous conflicts that have crippled its economy, primarily over territorial claims to Somali-inhabited areas of Ethiopia, Kenya and Djibouti. In addition to Somalia’s fiscal woes, its former President Maxamed Syaad Barre was overthrown in 1991 by rival clans who later failed to agree on a successor. As a result, for more than two decades after the overthrow of President Barre, Somalia had been without a formal parliament. Consequently, a complete lack of government oversight exacerbated by widespread famine has plunged the country into anarchy. With no competent police force to properly govern the country, many Somalis have turned to piracy as a means by which to survive. Although the rate of pirate attacks has rapidly diminished in recent years, the problem is by no means over.

Somali piracy has become a highly politicized issue in recent years, perhaps due to the extreme violence that is characteristic of the practice. Nonetheless, evidence shows that this problem has been around for decades. Somali pirates are primarily composed of former fishermen whose livelihood has been threatened by overfishing off the Somali coast. Indeed, many pirates claim the original goal of piracy was to protect the local fishing industry from European and Asian fisherman. Eventually, however, it was recognized that ransom payments derived from a successful piracy operation might provide a far greater source of income than fishing ever could.

Between 2004 and 2011, over 2,600 pirate attacks were reported with ransoms of up to $5.5 million being collected per incident. In total, the overall economic cost of Somali piracy was approximately $6 billion in 2012, down from $7 billion the year before. In response, the international community (including governments, NGOs, and the shipping industry) employed a variety of measures to reduce piracy incidents and bring perpetrators to justice. In 2012, one of these measures involved the deployment of between 21 and 30 military vessels participating in east African counter-piracy efforts in the Gulf of Aden and the Somali basin.

The Basics of Somali Piracy:

According to an extensive report authored by the World Bank, the fundamentals of Somali piracy can be broken down into three stages.

The staging areas for Somali pirate operations are primarily located on the coast of Puntland and the northern coast of Central Somalia. During initial preparations, an instigator will begin the process by collecting money from investors in addition to valuable items such as engines, skiffs or weapons. Like any successful business, the preparatory process for a piracy operation is a well-organized endeavour designed to raise capital for its participants. In fact, the world’s first piracy-based stock exchange was established in 2009 in the town of Harardheere, some 250 miles northeast of Mogadishu.

For the most basic pirate operations, perpetrators require a scouting vessel, a fast skiff equipped with a ladder, in addition to engines, fuel and enough food to survive several weeks at sea. Light weapons are provided by the pirates themselves (e.g. AK-47 rifles) whereas heavy weapons (e.g. rocket-propelled grenade launchers) are provided by investors. Following the initial task of financing and preparing materials for the operation, a pirate commander is then assigned to organize the attack and assemble a reliable crew.

After initial preparations, the pirate group will scout for potential targets in isolated waters. Areas heavily patrolled by foreign military vessels, such as in the Gulf of Aden, are increasingly avoided. As such, pirates have begun operating farther offshore, including areas such as the Red Sea and the Indian Ocean. Once a suitable target is located, pirates typically launch their attack vessels from larger ‘mother vessels’ such as captured fishing trawlers. These vessels are usually aimed at slow moving ships (traveling less than 15 knots) with limited maneuverability. Upon reaching the target vessel, the pirate crew will try to board the ship.

Upon boarding the ship, Somali pirates will attempt to hijack the vessel. Unlike conventional piracy operations where robbery is the primary objective, the goal of Somalian piracy is to take hostages and negotiate a ransom. These negotiations are typically conducted over satellite phone with shipping industry representatives. Once a settlement is reached, the hostages are released and the pirates return to the mainland with their ransom, barring some kind of successful rescue attempt.

Despite the relative early success of these operations, Somalian piracy has seen a rapid decline. Reactive measures taken by the shipping industry, including the presence of armed guards on board, the use of barbed wire and an increase in navigation speed has all but eliminated the threat of piracy for the majority of vessels in the region. Nevertheless, this is not to say that the threat has disappeared entirely. The problem of Somali piracy is endemic, and cannot be resolved through Band-Aid solutions alone. Any long-term solution must address the root causes of the issue: widespread poverty, civil war, and unstable government.

According to Marcel Arsenault, chairman of One Earth Future Foundation, “Until we have more economic opportunity and better governance ashore, we risk piracy returning to previous levels as soon as the navies and guards have gone home.” Unless some kind of long-term solution is implemented, the threat of Somalian piracy will remain alive and well for the foreseeable future.

Online Anonymity & The Deep Web: Why We Need A Better Approach To Cyber-Crime

Tina Bouffet examines the double-edged sword of online anonymity and how states should tackle the growing threat of cyber-crime.

A New Front Emerges: Russia, the Kerch Bridge and the Azov Sea

In this article, Isabelle Ava-Pointon examines the recent incident in the Sea of Azov. This timely and complex event will provide valuable insight into the ongoing Russian-Ukrainian conflict over the fate of Crimea.

Libyan Limbo: Is NATO The Answer?