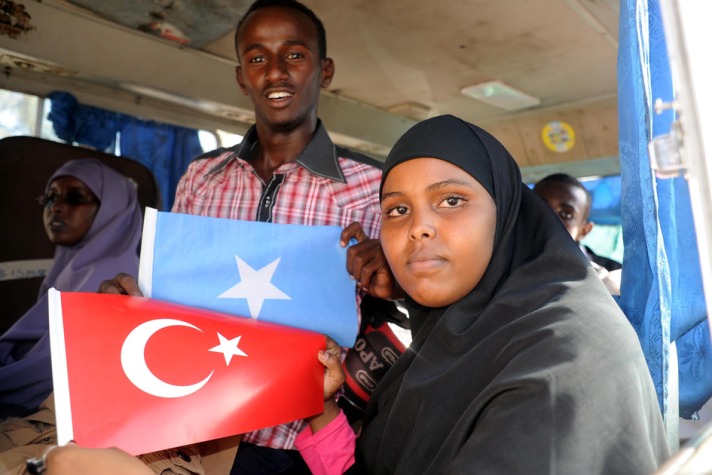 “In Turkish culture, it is believed that something good will come out of all bad experiences.”  –Turkish Prime Minister Recep Tayyip Erdogan

When Somalia appears in the news it is usually jihadists, pirates or warlords that grab the headlines—reports of progress and development don’t seem to fit the narrative. One such unsung story is that of Turkey’s renewed engagement with the country and the physical assistance it provides. While several Western states have increased aid to Somalia and convened conferences to address its myriad problems, Ankara has taken a different approach by putting (work) boots on the ground. In August 2011, Turkish Prime Minister Recep Tayyip Erdogan became the first non-African leader to visit the Somali capital of Mogadishu in over 20 years. Six months later Ankara had moved its embassy back to the city, where hundreds of Turkish development workers have also taken up residence.  Meanwhile, other donor states continue to conduct their Somali policy from the confines of Nairobi, Kenya—over 1200km from Mogadishu.

In July 2011, the UN declared a famine in Somalia for the first time in two decades—a yet incalculable number of Somalis died, while tens of thousands were forced to flee to neighbouring countries. It was during this strife that Turkish concern for the country became crystallized. During the month of Ramadan (August 1-30), over $280-million worth of government aid and private donations were raised in Turkey for famine relief. A further $350-million was pledged at an emergency summit of the Organization for Islamic Cooperation convened in Istanbul. Prime Minster Erdogan used the summit to lambaste wealthy nations with “sleeping consciences” for their lack of support. “If you ride a luxury car you should be generous enough to people who are struggling with hunger,” the Prime Minster exclaimed.

It was during that same month that Erdogan made his landmark visit to Somalia. Although the tour lasted only a day, Erdogan—and an entourage of family, ministers, business people, and bureaucrats—sought to send a symbolic message: the people of Somalia are not alone and Mogadishu is not a chaotic wasteland off limits to development assistance. Mogadishu mayor Mohamed Nur called the visit “the best gift that the Somali people can have in the last 20 years.” Other high level diplomatic visits have since followed the Turkish lead. In February 2012 William Hague became the first British Foreign Secretary to visit Somalia since 1992.

During the Ramadan aid drive over 500 Turks came to Somalia to volunteer. T here are now some 200 Turkish nationals working on a plethora of projects in Mogadishu, including building hospitals and schools, providing garbage trucks and waste disposal facilities, renovating parliament and other government building, and paving war-ravaged roads. This again contrasts sharply with the Western approach to humanitarian engagement which all too often seeks to help Somalia while being there as little as possible. One aid worker employed by a Western government with a long history of engagement in Somalia reported to Foreign Policy that he had only ever travelled to Mogadishu once in seven years on the job.

After Turkey became the first non-African state to reopen an embassy in Mogadishu in November 2011, Erdogan called on other states and international institutions to move their offices from Nairobi back to Somalia. Following the Turkish example, the UN Political Office for Somalia re-established itself in the country in January after a 17 year hiatus. “The Turkish aid is setting a lot of pace,” noted Killian Kleinschmidt, the UN’s deputy humanitarian coordinator in Somalia. The UK’s Nairobi-based ambassador to Somalia, Matt Baugh, similarly acknowledged that “the Turkish have shown what it is possible to do operationally.” The British government, for its part, claims to be “actively seeking to re-open an embassy in Mogadishu as soon as local circumstances permit.”

The Turkish private sector has also taken a keen interest in Somalia. With a national economy that grew 8.5% in 2011, Turkish investors are actively seeking out new markets. A representative from TUSKON, Turkey’s largest business alliance, noted that Somalia has been singled out for its potential in construction, building materials, real estate, mining and agriculture industries. Turkish Airlines recently became the first international carrier to run flights out of Mogadishu in over 20 years, a move that serves the interests of both the Turkish government and private sector.

Turkey and Somalia’s shared Islamic heritage and culture gives Ankara an advantage in aid deliverance, as Turkish development workers are noted for their integrationist approach. One Somali businessman remarked that the Turkish workers were so welcome because they interacted with locals on a regular basis, most notably at the mosque. “With the Turkish mentality, as a Muslim, we aren’t separating ourselves from the public,” claimed Serhat Orakci of the Turkish aid group IHH. UN officials have similarly noted that organizations with Islamic backgrounds, such as the Turkish Red Crescent, can “move better” than their Western counterparts.

Critics contend Turkey has grown too close to the TFG and President Sharif, turning a blind eye to corruption and mismanagement

Though Ankara can rightfully be described as an aid pioneer, there are several strategic and political issues it will soon have to contend with. Turkey’s return to Mogadishu was enabled by an African Union force (AMISOM) offensive that began driving al-Shabaab militants out of the capital last summer. Insurgent attacks remain a regular occurrence however, and several aid workers have been killed or kidnapped in recent years.

While Turkish aid groups have not yet reported major security concerns, Ankara’s actions have seemingly placed it in the cross-hairs of al-Shabaab. Turkey’s provision of hundreds of university scholarships to Somali students was denounced by al-Shabaab clerics as an attempt to turn Somalia into a secular state. In October 2011, a suicide bombing by al-Shabaab targeted students who were waiting to apply for the Turkish scholarships. While Turkish aid organizations have remained steadfast in Mogadishu, southern Somalia remains largely off-limits to development assistance as it is still fought over by al-Shabaab and an assortment of local militias and regional armies.

Politically, Ankara has been criticized for becoming too close with the leaders of Somalia’s Transitional Federal Government (TFG), whose mandate is set to expire in August. Turkey’s Ambassador to Somalia, Cemalettin Kani Torun, has spoken favourably about the TFG’s commitment to representative transition and the possibility of a future role for (unelected) TFG President Sheikh Sharif Ahmed. Western NGOs, meanwhile, have taken a less rosy view of the TFG. The International Crisis Group has described the government as “inept, increasingly corrupt and hobbled by President Sharif’s weak leadership.”

A bold and direct approach to humanitarian assistance in Somalia is a welcome development and Western government agencies, NGOs, and businesses have lessons to learn from their Turkish counterparts. If Ankara is able to use its political clout to push for genuine political reform, progress and reconciliation—and not just short-term development—may finally result.