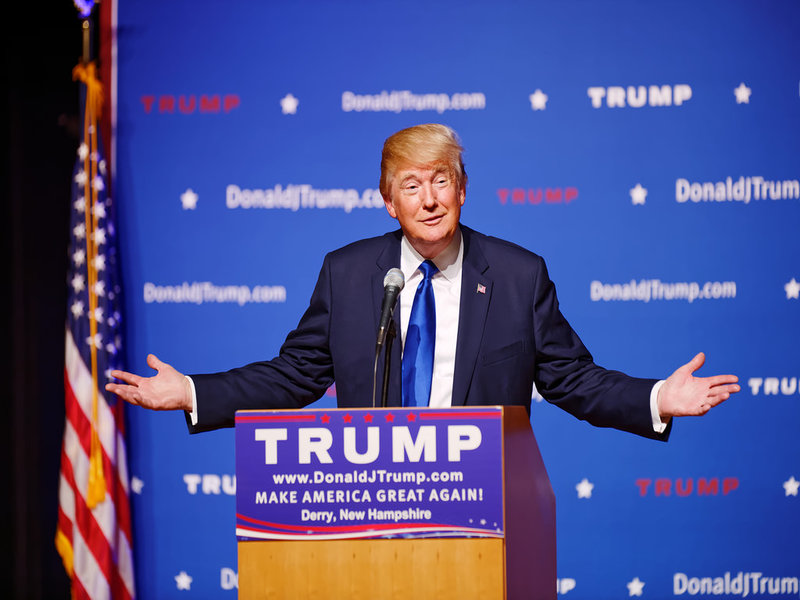 The research firm Economist Intelligence Unit has ranked a Trump presidency as one of the top 10 risks currently facing the world. According to the report “his presidency is rated as riskier than Britain leaving the European Union or an armed clash in the South China Sea.” A military confrontation with China, in one of the most militarized areas of the world, is less risky than a Trump presidency. It would be unwise for NATO and its Western allies to underestimate Donald Trump.

For many within the Republican Party elite, or Grand Old Party (GOP), the thought of Donald Trump’s winning the nomination seemed remote at best in late 2015. However, slowly as time progressed, the GOP went further and further down the rabbit hole. On May 5, 2016, Senator Ted Cruz withdrew from the Republican primary race making Trump the presumptive nominee for the party. What seemed impossible in June 2015, when Donald Trump announced he was going to seek the nomination, has become possible.

Many pundits have watched in disbelief, as Trump has disposed of 16 more seasoned competitors. His success in the Republican primaries may actually translate into presidential victory in November 2016. Hilary Clinton, the presumptive Democratic nominee, is still the favourite to win the presidency, but foreign government leaders would be wrong to discredit Trump entirely. He does have a chance, and that’s due to having a deep understanding of how to capitalize on the current political mood in America.

National Broadcast Center (NBC) News recently referred to a “New American Center”. These electors believe America is the best country in the world, hate the political system and elites, and do not like immigration or Affirmative Action. However, the presidential candidate is not just riding a wave of voter dissatisfaction.

One of Trump’s most controversial comments was in reference to Mexican immigrants. In reference to the flow of Mexican people through the US southern border he said, “They’re bringing drugs. They’re bringing crime. They’re rapists.” Trump was resoundingly criticized by many Americans for his comments, but some Republican voters were not turned-off by this outburst.

During the New York republican primary many immigrant groups openly supported Trump. Rene, 38, an immigrant originally from Ecuador supported Trump, because he believed the Democrats have not helped immigrants like himself. He originally came to the US illegally, but eventually applied for legal permanent residency with the help of his employer.

Tony Mele, 55, a member of the Latino community supported Donald Trump because he believes a Trump administration will tell illegal immigrants to “get to the back of the line like everybody else.” Mele and Rene were not anomalies during the New York Republican Primary.

Adity Sharma, a 30 year old female law student, is an immigrant from India and supports Trump. She argues that Americans current foreign policy towards Pakistan is too friendly, and believes Trump could change that to benefit India more. In a radio interview in September 2015, the Republican presidential candidate called Pakistan “probably the most dangerous” country in the world today, and that India is the only country that can “check” Pakistan. Trump appears to have inadvertently pandered to the large Indian diaspora in the US.

This phenomenon of immigrants supporting far-right, anti-immigrant politicians is not unique to the US. Heinz-Christian Strache, leader of the Freedom Party of Austria (FPO), has openly courted Serbian immigrants. Mr. Strache argues that “the Serbian Christian Orthodox are his allies against the Turks.” Trump and Strache both know how to appeal to certain sections of their respective immigrant populations. Trump is especially gifted at appealing to the disenfranchised within American society.

An increasingly growing dissatisfied social group feeling itself disenfranchised in the US is the working class. Jim Creskey, in his article “This column is not about Donald Trump” in Embassy, highlights how historically American liberals are the natural allies of the working class. He argues that “they somehow lost their touch in the generations following FDR.” Creskey believes that the working class has been ignored a long time in the US, and now a demagogue has arrived on the scene who claims to speak for them. Trump is filling a void that has existed in American politics for too long.

The final mechanism that has allowed Trump to seize the Republican nomination, and launch a viable campaign for the White House is his use of social media. President Obama was the first major political leader in the Western world to capitalize on the social media universe. Throughout his presidency, Obama has leveraged the opportunities of the digital age to the maximum political advantage. Many critics worried that “governance by social media would cheapen the power of the presidency by substituting hash tag activism for serious policymaking.” The rise of Trump seems to have proven these critics right.

Trump has mobilized a massive number of republican voters through free media and social media tools. Ron Bonjean, a Republican strategist, in the National Post article “Free media, Twitter replace ground game,” argues that Trump does not need a ground game, because he mobilizes angry voters through his rhetoric.” Dan Pfieffer, Obama’s social media guru, says Trump is “way better at the internet than anyone else in the GOP.”

The Republican nominee did not have a very good ground game compared to his former competitors. According to the National Post article, Senator Ted Cruz had six phone banks, chairs in every congressional district, plus a volunteer army of more than 10,000 donors and door-knockers in Georgia alone. Cruz placed third in Georgia with 23.6% of the vote, just behind Senator Marco Rubio (24.4%), but well behind Trump who won with 38.8% of the vote. Cruz had the largest and most efficient ground game in Georgia, but was unable to mobilize the support Trump did.

The unexpected success of Trump can be attributed to the historic number of dissatisfied republican and independent voters, his appeal to select immigrant groups, his ability to co-opt the working class, and his massive social and free media apparatus. He may be viewed as one of the most prominent threats to global security at the moment, but NATO members should begin planning for a Trump presidency and taking steps to mitigate any risks. While it remains to be seen if Trump’s political machine can defeat Hilary Clinton, it would be unwise for the NATO members to underestimate him. Trump has proven everyone wrong so far.