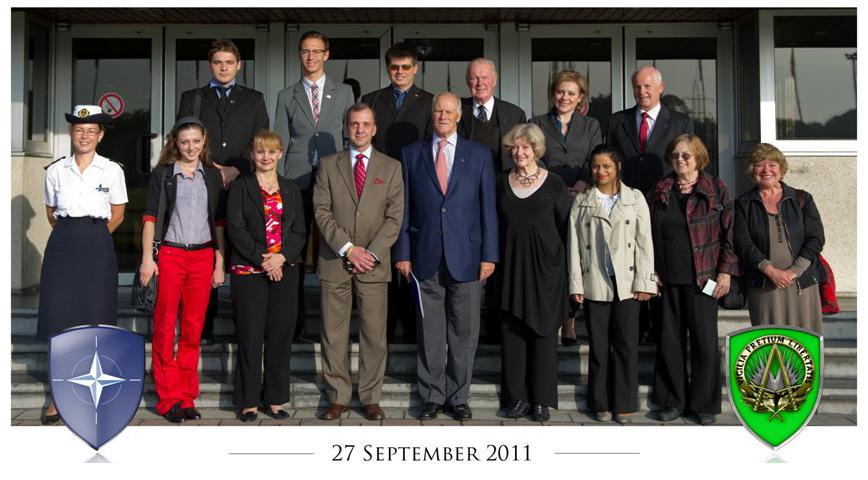 A study group headed by the Honourable Bill Graham recently returned from the NATO Council of Canada’s annual NATO Tour, an enthralling weeklong excursion to both Brussels and Paris. The delegation combined insight from a variety of fields, bringing together NCC interns and members of the business, military, and diplomatic com-munities. The tour offered participants the unparalleled opportunity to hear and engage with key personalities at a variety of military and political institutions.

The first evening in Brussels was spent at a barbeque hosted by Ambassador Martin Trenevski, the head of the Republic of Macedonia’s mission to NATO. Over a delicious meal, the group learned about the progress the small country has made towards meeting the Alliance’s standards and the obstacles to membership that still lie ahead. The following morning the delegation departed for NATO Headquarters, where they were briefed on the Alliance’s current operations and future challenges. Jonathan Parish, a Senior Planning Officer with the Public Diplomacy Division, explained NATO’s current security concerns—including weapons proliferation, terrorism, failed and failing states, and cyber attacks—as they pertained to the Alliance’s New Strategic Concept. Ongoing challenges, such as the difficulty of consensus building in the ever-widening alliance and the need for cost effective “smart defence,” were also discussed.

H.E Yves Brodeur, Permanent Representative of the Canadian Delegation to NATO, briefed the group on Canada’s position in the Alliance, focusing particularly on its shifting role in Afghanistan. The delegation was then informed about NATO’s efforts to broaden its global partner-ships through the Mediterranean Dialogue and Istanbul Conference Initiative. The Alliance’s relationship with Russia and Ukraine was also a topic of spirited discussion.
The following day was spent at Supreme Headquarters Allied Powers Europe (SHAPE), the Alliance’s military command center located in Mons, Belgium. At this impressive complex, the group was briefed on the structure of NATO, as well as its ongoing operations in Libya, Afghanistan and Kosovo, aerial surveillance missions and naval patrols in the Mediterranean and Horn of Africa were also discussed. The delegation was then met by an officer from the EU’s military attaché to SHAPE, who detailed the European Union’s efforts to establish a standing military force as well as the intricacies of NATO-EU cooperation. Following this, the group was treated to an informative question period with high-level military representatives from both NATO and the EU. On the way back to Brussels, the delegation stopped at the historic site of Waterloo and were pro-vided with an interactive tour of the battle by group member, Colonel George Petrolekas.

The EU dimension of transatlantic security and economic cooperation was further illuminated the following day with a trip to the Canadian Mission to the European Union. Frank presentations about the Eurozone debt crisis and Canada’s relation-ship with the EU spurred vigorous discussion among the delegation. It became clear that while both Can-ada and NATO maintain close and productive relations with the EU, the partnership is not without its irritants and challenges. The day was rounded out with a tour of the European Parliament, providing an inside look at its structure and functions.

The next day the group departed “The Capital of Europe” for “The City of Lights.” After arriving in Paris, the delegation received a briefing from the staff of l’École de Guerre—the French war college. The delegation was enlightened as to the school’s purpose, which is to instill a high level of military professionalism and spirit of cooperation among the multinational officers trained at the institution.

The school’s program, curriculum, and participating nations were all topics of interest for the group, which was once again treated to an honest and informative discussion.

The final day of the tour began at the Canadian Delegation to the Organization for Economic Cooperation and Development (OECD), where the group was briefed on the Organization’s history and activities, as well as the unique role played by Canada. At OECD headquarters the delegation participated in two excellent presentations. The first dealt with failed and fragile states, and the difficulty associated with delivering effective aid. The amount of research that the OECD has put into better addressing this important issue quickly became clear, as did the creativity behind their policy proposals. The second presentation speculated on the economic outlook of the Eurozone and wider global economy. Though the topic had been discussed throughout the week, the speaker provided a refreshingly unorthodox view on the possible implication of a Greek default. Our final meeting was with H.E Marc Lortie, the Canadian Ambassador to France. Mr. Lortie illuminated the power struggles and divergent visions emerging within both the French political system and the EU itself.

The 2011 NATO Tour was great success—a fortuitous combination of good company, beautiful weather, and absorbing discussion. The participants had their pressing questions answered, but came away with many new areas of inquiry as well. For this author, it was the opportunity of a lifetime.