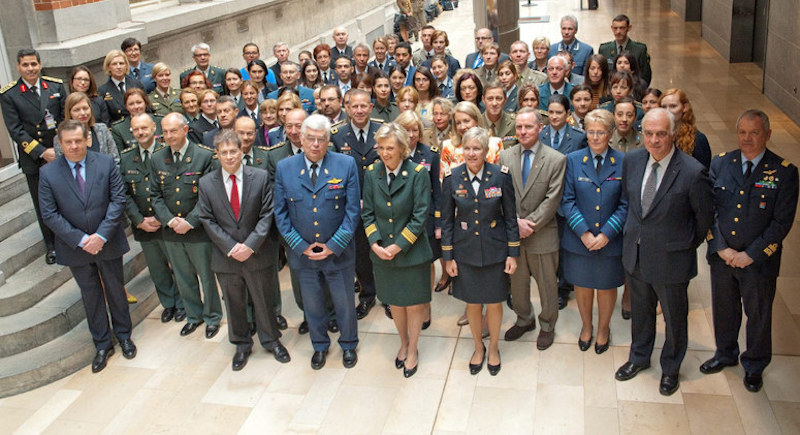 Security Council Resolution 1325 is a key UN document recognizing the importance of enhancing the role of women in global peace and security issues. Since its adoption in 2000, NATO has demonstrated an active commitment to the resolution’s implementation through a series of initiatives, among them appointing a Special Representative for Women, Peace and Security, creating a gender office and advisory committee of experts, and bringing in various gender advisers.

In a UN Security Council Open Debate on October 13, 2015, NATO Deputy Secretary General Alexander Vershbow recognized that NATO itself lacks equal participation. “We need to do more, especially when it comes to promoting equal participation … We need to increase [the] active and meaningful participation of women,” he noted. “Improving gender equality within NATO not only improves our credibility; it is essential to our ability to do our job right. Gender equality enhances our ability to respond and deal with crises.”

While NATO is making a strong effort to pursue gender equality in its practices, Vershbow underscores a crucial point. Over a decade has passed since the adoption of Resolution 1325, and NATO continues to lack female representation at senior decision-making levels. Currently, only 3 permanent representatives to NATO are female: Kerry Buck for Canada, Anna Jóhannsdóttir for Iceland, and Marjanne de Kwaasteniet for the Netherlands. Furthermore, NATO’s first female NATO Commander, Brigadier General Giselle Wilz, was only appointed in May 2015.

To that effect, Vershbow and NATO have pledged to do more towards advancing women in security matters. Their pledge includes sharing the best practices and lessons with Allies for increasing female participation at decision-making levels, accelerating the advancement of women in NATO headquarters by establishing a Women’s Professional Network and Mentoring Programme, encouraging Allies to submit female candidates for senior decision-making positions, strengthening partnerships for gender equality with international organizations such as the UN and EU, financing gender-sensitive research to identify drivers of violent extremism and develop responses, and establishing a civil society advisory panel.

Since October, equal gender participation has only been tangentially pursued. On the last International Women’s Day (March 8, 2016), Iceland and Canada hosted a “Barbershop Conference” on gender equality at the NATO Headquarters. NATO’s Special Representative for Women, Peace and Security, Ambassador Marriët Schuurman, facilitated the conference, openly discussing the implementation of gender equality in a way similar to conversations in an average barbershop. During the discussion, NATO Secretary General Jens Stoltenberg stressed three reasons gender equality is an important issue for NATO and in militaries in general: NATO’s fundamental values – human rights and individual liberties among them – cannot work without equality, woman are at a higher risk than soldiers for danger in conflict zones, and diversity will allow NATO to recruit the “best and the brightest.”

More recently, on April 23, 2016, NATO’s Headquarters took to sports to raise awareness for Resolution 1325 in the first-ever “She Runs, He Runs, We Run” solidarity run. The event was meant to exhibit the role of sports in empowering women and dissolving gender stereotypes. Ambassador Schuurman highlighted the importance of the run in demonstrating that together, men and women are stronger and fearless.

NATO’s efforts in working towards achieving gender equality by enhancing female representation are laudable. The Barbershop Conference and solidarity run are commendable initiatives. However, nearly 16 years after the Resolution’s adoption, Vershbow correctly identified areas for further progress within NATO itself. Hopefully in the near future some of the pledges made back in October will begin to take effect.

Photo credit to the NATO Committee on Gender Perspectives