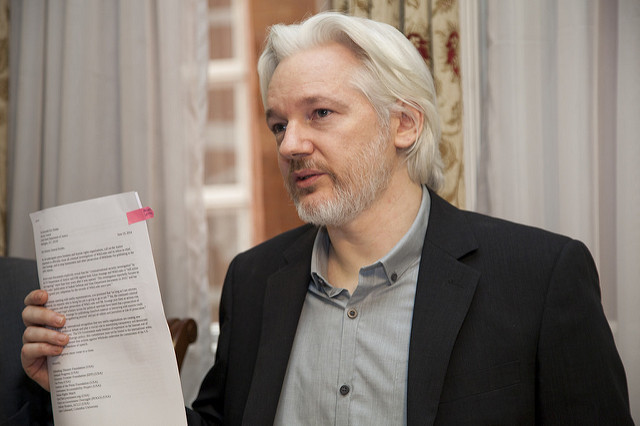 Last week, United States Attorney General Jeff Sessions stated that the arrest of WikiLeaks founder Julian Assange is now a “priority” for the United States. Assange, who currently resides in the Ecuadorian embassy in London, has been under investigation since 2010 when WikiLeaks released over a quarter of a million classified cables received from Chelsea Manning. It is worth remembering the investigation on Assange was put on hold after former Attorney General Eric Holder concluded that it would be too difficult to charge him as WikiLeaks was one of many actors publishing such documents.

This new push to prosecute Assange stands in stark contrast to Trump’s praise of Wikileaks during the presidential campaign when the website published Democratic National Committee (DNC) emails which ultimately facilitated the Republican candidate’s election. The latest attempt at prosecuting Assange comes as Wikileaks released in March 2017 the largest leak of CIA documents in history. Over 8,500 documents came with the leak named “Vault 7” which focused on CIA hacking capabilities. The documents included revelations that showed the CIA capabilities for hacking smartphones, computers, and smart televisions. Moreover, Assange described the leak by saying “The CIA developed a giant arsenal, what appears to be the largest arsenal of trojans and viruses in the world that attacks most of the systems that journalists, people in government, politicians, CEOs, and average people use. Didn’t secure it, lost control of it, and then appears to have covered up that fact.”

Moreover, to add insult to injury, since Session’s announcement, WikiLeaks has released a 31-page guide to the CIA’s device codenamed “Weeping Angel”, a tool implanted in Samsung Smart Televisions designed to record audio.

In the past, prosecutors have struggled in charging Assange due to the First Amendment which states “Congress shall make no law respecting an establishment of religion, or prohibiting the free exercise thereof; or abridging the freedom of speech, or of the press; or the right of the people peaceably to assemble, and to petition the government for a redress of grievances.” Such attempts have fallen short due to the nature of WikiLeaks which acts as an intermediary between whistleblowers and the press. Therefore, WikiLeaks is protected under the right of freedom of expression, which is not extended to whistleblowers such as Chelsea Manning or Edward Snowden.

Historical legal precedent backs up the protection of Assange and WikiLeaks. In 1971, The New York Times released the ‘Pentagon Papers’, which revealed the US military’s secret involvement during the Vietnam war in countries like Cambodia and Laos. The leaks caused President Richard Nixon to use executive authority to suspend the Times publication. However, the Supreme Court ruled in favor of The New York Times, stating that company was protected under the First Amendment.

However, not all agree with Assange’s protections under the First Amendment. CIA Director Mike Pompeo described WikiLeaks by saying “It’s time to call out WikiLeaks for what it really is: a non-state hostile intelligence service often abetted by state actors, like Russia”. Pompeo later went on to say Assange “has no First Amendment freedoms” as he is not a US citizen and lives in the Ecuadorian embassy in London. While the previous leaks were more focused on American intelligence activities, the latest one largely involves CIA cyber capabilities. As such, the American Judiciary branch might be more flexible in prosecuting Assange. Indeed, the release of information on CIA cyber capabilities might cause the U.S to lose its edge over foreign intelligence agencies looking to reverse-engineer those intel-gathering tools in order to match and surpass the United States.

In addition to facing judicial hurdles at home in prosecuting Assange, one must not forget that Wikileak’s founder has been given sanctuary in the Ecuadorian Embassy. As a reminder, Assange is avoiding an arrest warrant for rape allegations in Sweden by taking refuge in the Ecuadorian embassy in London. This situation requires Washington to pressure Ecuador in releasing Assange so that he may be subsequently deported to Sweden and then transferred to the U.S. For that matter, in 2013, the previous U.S. administration cancelled $32 million in aid programs to Ecuador. With that in mind, given President Trump’s tough approach in foreign policy characterized by transactional diplomacy, more drastic measures to pressure Quito would be a possibility.

Photo: Wikileaks founder Julian Assange at a press conference at the Ecuadorian Embassy in London, UK (2014) by Cancilleria del Ecuador via Flickr. Licensed under CC BY-SA 2.0.