The 17th National Congress of the Communist Party of China.

Since the 2008 financial collapse, money has mattered more than politics. Economic circumstance has dictated public policy to an unprecedented degree, as the largest economies and currency unions create and manage vehicles for preventing systemic collapse. Today, we see the political outcomes manifest.  In democratic Greece, voters are poised to elect a left-wing government advocating the abandonment of the bail-out agreement, to the disdain of financial markets and potentially resulting in a devaluation of the Euro. In China, recent discussion of an economic crash masks an unpredictable control mechanism to prevent it: the return of politics.

As this year of political transition progresses in the context of slowed growth, political conflict in China is evidenced by two important outcomes. First, inaction on major economic and monetary policies intended to maintain higher than average growth levels, and second, an increased diplomatic protectionism that aims to guard the Chinese economy from external shocks and crisis’ of confidence.

China announced last Thursday that import growth slowed dramatically, down from 11% in 2011 to just 0.3% for the same period in 2012. Likewise exports grew only 4.9% in April, less than half of what economists predicted. The bottom line: the Chinese economy is both producing and consuming less.

For China, moving from annual GDP growth rates of 9% to roughly 6% makes sense. As Ruchir Sharma, head of Morgan Stanley’s emerging markets fund, points out in his work “Breakout Nations,”  10% growth for an economy of $1 trillion is a mere $100 billion dollars. For an economy of $5 trillion, 10% growth rates require an expansion of $500 billion. Not only does this require consistent economic acceleration, it also requires unsustainable commodity consumption that drives inflation.

As China’s growth decelerates, space for political conflict will increase as debate over economic strategies becomes more litigious. Rumours persist that the Communist Party will postpone its congress, where the new President and Prime Minister are scheduled to be appointed. While the two top positions are not in doubt, the fall of former Politburo member Bo Xilai precipitated a contentious debate over the future makeup of the standing committee of the Politburo. In China, like in all political systems, success facilitates consensus and failure breeds political conflict.

Moreover, political leaders exercise greater control over the domestic economies than their counterparts in the West. In China, it is the political elite that control monetary policy, and thus outcomes such as inflation. While this gives more control space for complementary strategies such as quantitative easing and stimulus, it also results in greater political competition and intensified conflict of opinion.

Chinese banks, under the control of the Politburo in Beijing, have no current plans to raise the loan-to-deposit ratio, an important tool in maintaining the liquidity of capital required to sustain major industries such as construction and transportation. As deposit rates have declined, so to have the share prices of China’s four largest banks; by a combined 20% over the last three months

In a year of transition, the regime has also gone to great lengths to limit the impact of political events on external relations and economic development. The most notable highlights are the March 15 ouster of Bo Xilai and the Chen Guangcheng incident in May. The case of Bo Xilai, displayed the intense infighting within the Politburo, while cooperation with the United States in the Chen saga showed the extent the regime was willing to go to prevent internal disputes from spilling into the international arena. 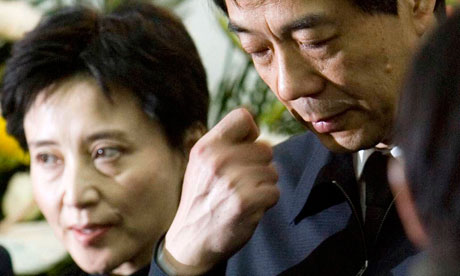 Rising Politburo star Bo Xilai was suspended by the Communist Party after his wife became a suspect in the murder of a British businessman.

The tight control exercised has masked increasing uncertainty in Beijing over how to deal with slowed economic growth. As the result of bad first quarter figures, the government accelerated approvals of infrastructure projects, increased financing for public housing and created 36 billion Yuan (5.7 billion USD) worth of energy subsidies . But the stimulus effort had no price tag and paled in comparison to the 2008 stimulus of 4 trillion Yuan (586 billion USD) of 2008 that demonstrated the government would go to any length to maintain growth rates. The comparably small stimulus and lack of defined strategy displays a greater degree of either indecision or defined control at the political level.

Ironically, it may be stimulus in China that stands the best chance of tempering market fears over the European debt crisis. As demand for commodities in Europe falls, so too will output from large producers such as Russia. In theory this will create greater domestic demand in larger markets like China, spurring sustainable growth. Amidst the general decline in Chinese trading indices, automakers such as Great Wall Motors and Chongqing Changan Automobile Corp were among those advancing in the markets after being named as targets for government subsidies. The paradox however, is that China is unlikely to need a massive stimulus unless Greece does leave the Eurozone. Until then it seems, China will remain reactionary, protecting its political system and domestic economy until the European crisis abates.

John Pollock examines the increasingly assertive maritime role of China in the South China Sea and the historical prism through which Beijing approaches the region.

In China, the “Century of Humiliation” Drives the Nationalist Narrative