Kofi Annan’s six point plan has been sidelined as a total failure by many political observers and increasingly by those within the Obama administration. It may be argued that the Syrian rebels agree, given a recent bombing of army troops guarding United Nations observers. The initiatives put forward by the former Secretary General of the United Nations, specifically the second point regarding the removal of troops and heavy weapons from urban centres, were markedly unfeasible. The regime of Bashar al-Assad acknowledges that the only way in which it can ride out the storm of political protest is to crack down on dissenters and ensure that the Free Syrian Army is unable to maintain a foothold in towns and cities.

Although arms continue to enter the country via Lebanon and Turkey, Syrian rebels explicitly complain about a lack of arms and ammunition. Interestingly, while the Syrian regime and its allies Iraq and Iran have pointed fingers at both Saudi Arabia and Qatar for arming the rebels, these Gulf States have yet to provide groups fighting the government with the necessary anti-tank and anti-aircraft weapons to battle Assad’s armor and helicopters.

The Syrian rebels are now shifting to guerilla tactics after suffering heavy losses across the country. In what has become a civil war, the conflict is shifting into a stage of perpetual violence and insurgent tactics. The United Nations observer mission has been beneficial in halting large scale violence in many areas. That being said, for the mission to have a country-wide impact on the Syrian situation and prevent government repression of unarmed protesters, the UN would have to multiply the number of observers deployed, a fact Turkish Prime Minister Recep Tayyip Erdogan has publicly acknowledged.

So far the Annan plan has failed: there are not enough observers on the ground nor will there be a sufficient number anytime in the future; farcical elections have been held as opposition strongholds are largely involved in a boycott; killing and arbitrary arrests have continued, all while Iran happily watches Assad regain a semblance of control. 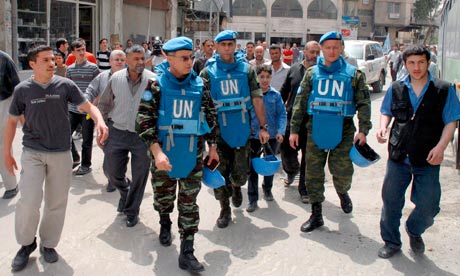 With all these dismal facts laid out, how is Annan’s plan a failure with international benefits? What the vast majority of observers have not taken into account, or have dismissed altogether, is the effect that Annan’s diplomatic manoeuvres are having on the international stage. Kofi Annan was brought in as the joint UN-Arab League Special Representative due to the fact that he is well respected globally, specifically among the parties involved and those supplying the two sides of the conflict. Richard Gowan in his piece for Foreign Policy rightfully outlined this reality in March, and the majority of his observations ring true to this day. Russia and China have backed the Annan plan and thus provided a small but meaningful international consensus on events in Syria. The Annan plan also constrains the actions of these states. Now that they have signed onto the plan any blatant deviation by the Assad regime must be condemned or at least acknowledged by Chinese and Russian representatives. Furthermore, the international consensus around the plan and the issue of Assad’s relinquishing power ensures that if regime troops revert to tactics of mass punishment and barefaced attacks on civilians, those backing Damascus will be hard pressed to continue their support.

The Russians understand that for Assad to survive he cannot relinquish control over large areas of the country and give space for peaceful protest to flourish. This would undermine the morale of his forces, the unity of his inner circle, and would largely increase international pressure as excessively violent repercussion ensued—which Annan’s plan has forced the Syrian government (but not the state sponsored Shahiba militia) to shy away from. Thus, Assad is stuck between a perpetual rock and a hard place, either allow the Annan plan to go forward and lose control over large swaths of the country or continue with repression and risk further international condemnation, increased sanctions, and the possibility of some flavour of intervention—in turn increasing pressure on his international backers. The Russians want to avoid the latter scenario. Senator John Kerry, Chairman of the Senate Foreign Relations Committee, has stated that in conversations with Russian Foreign Minister Sergei Lavrov there has been agreement that Assad must step down, but that he also should be part of a peaceful transition of power. This is largely a result of the Annan plan and the restrictions it has put on both the Assad regime and on the country’s international backers.

With Russia debating a political transition, Assad’s most important backer is toying with shifting its policy on Syria. This must be taken advantage of, or the allies of the Syrian people will continue to waste their time on blocked United Nations resolutions while bearing witness to a rising death toll. China for its part has little tangible interest in Syria, but is blocking Syrian initiatives at the United Nations out of spite due to its inability to access the oil rich Gulf. Without Russian cover, the Chinese would not want to be viewed in the Sunni Arab world as the only international defender of a despot in what has largely become a sectarian conflict. This would be bad for both its image in the region and for future access to Saudi petrol resources. A crucial loss of support would leave Assad with only one backer, the Islamic Republic of Iran, currently suffering under a range of sanctions related to its nuclear program, and thus largely unable to replace the loss of Russian backing. Let’s give Kofi Annan’s six point plan a chance to continue, it may help to bring about a soft transition of power in a country that has seen roughly 12,000 violent deaths.

Alexander_Corbeil
Alexander Corbeil is a Research Analyst at The NATO Association of Canada focusing on the Middle East and North Africa. He holds a Master’s Degree in Political Science from the University of Toronto with a focus on conflict management, post-conflict resolution, and authoritarian regimes in the Middle East. Alexander has also studied conflict management in Arab-Israeli relations at The Hebrew University of Jerusalem in Israel. Recently, Alexander had the privilege to consult the top political echelons of NATO through the Your NATO, Your Ideas contest hosted by The Atlantic Community open think-tank. In addition, he has also lent his expertise to the Transitional Federal Government of Somalia regarding post-conflict constitutional and institutional development. Contact: alex.corbeil@atlantic-council.ca

Saudi Arabia: Between a Rock and a Hard Place

Evan Blackwell looks at the challenges facing Saudi Arabia’s leaders as they attempt to counter ISIS’ plans for unleashing sectarian war in that country.

The Middle East and North Africa Women in Security

Sex, Security, and Democracy in Afghanistan

Afghanistan was at the top of the agenda when world leaders met this month at NATO’s Chicago summit. Important issues, including a timetable for troop withdrawal and the Alliance’s post-2014 support and training role, were agreed upon. The second focus of the discussion on Afghanistan was on human rights, democracy, and the rule of law—with the Read More…