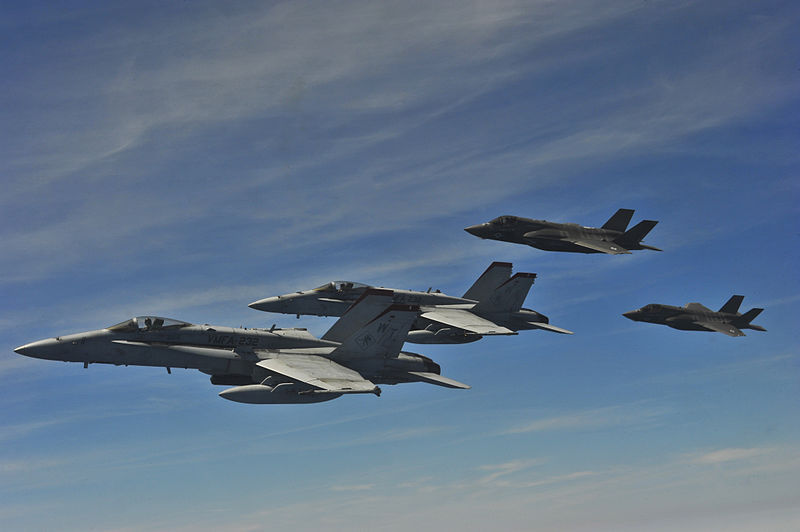 After a general analysis of Canada’s Defence Policy in Part 1, and examining the implications of adopting an accrual method of accounting in Part 2, we now turn to analyze the impact of the Defence Policy on the three main branches of the Canadian Armed Forces. Part 3 explores the implications of the policy for the Royal Canadian Air Force (RCAF). The proposed purchase of 88 ‘advanced fighter jets’ was one of the most prominent procurement promises made, in addition to increasing the scope of numerous smaller, current existing projects. Procuring new transport aircraft and RADARSAT systems represent formidable challenges in themselves, but are not comparable in scale to plans for procuring 88 advanced fighter jets. The policy allocated a total of $46.4 billion CAD to the RCAF. $20.1 billion CAD will be spent on 17 new equipment projects; the remaining $26.3 billion will fully fund planned equipment projects. Part 3 of this special report evaluates which existing ‘advanced’ aircraft Canada can procure within the constraints imposed by the policy, and the evolving threat environment that necessitates acquiring a new aircraft fleet.

The policy considers the acquisition of advanced aircraft to be one of the fully funded planned equipment projects. In theory, this renders the aircraft project eligible for a hefty portion of the $26.4 billion allocated to planned equipment projects in total. Unfortunately, Canada’s decision to adopt an accrual method of accounting prevents any accurate cost estimate of procurement projects, including the advanced aircraft. Difficulties in accurate cost estimation are also compounded by ambiguity surrounding the specific aircraft Canada will procure.

Canada’s official position at the time of writing on the status of the CF-18 replacement project is that the Government has started “discussions” with both the U.S. Government and Boeing on “potentially” purchasing 18 Super Hornet aircraft as an “interim solution” until the permanent solution is fully operational. Although Canada declared it has already undertaken preparatory work in planning a bid solicitation in 2019 for a permanent replacement, with Lockheed’s F-35 expected to be a major contender, all talks with Boeing over the interim solution jet have currently been suspended over Boeing’s complaint against Bombardier. Media scrutiny over the Canadian delegation’s ostentatious snub of Boeing at the Paris Air Show earlier in June further fuelled speculation about whether Canada will resume talks with Boeing over the interim replacement project – Canada has not suspended on-going talks with the U.S. Government.

11 years ago the RCAF concluded that the F-35, of which only a single test model existed, was the most “cost effective” way to meet the needs of the RCAF. Amongst the many tragic aspects involving Canada’s protracted purchase of the F-35 has been the politicization of the issue in Canadian domestic politics. Since Conservative Defence Minister Peter MacKay announced that Canada would purchase the F-35 in 2010, only to retract the statement 90 minutes later, and recommit to it 6 months after, the issue of Canada’s next fleet of aircraft has after seven years of acrimonious debate been elevated to the position of party platform. Prime Minister Trudeau seized the opportunity presented by Lockheed’s worryingly habitual tendency over these 7 years to issue constant revisions to their price estimation of the Joint Strike Fighter program. Trudeau, during his election campaign, promised to scrap Canada’s involvement in the F-35 program due major cost overruns, in favour of a cheaper aircraft. This has placed Canada in a situation where the domestic politicization of an issue of national strategic importance has ultimately been detrimental to Canada’s national interest. Trudeau is now confronted with either rescinding a major election platform to purchase an aircraft that can indeed meet the criterion of Canada’s defence, or, searching for an alternative that may not possess the capabilities of an aircraft like the F-35.

One of the defining elements of Canada’s new aircraft fleet should be high levels of interoperability with our allies. The existing range of options for 5th generation fighter jets are already limited, and Canada’s requirement that jets be interoperable with core partners and key allies is already an allusion to the F-35, which many allies are expected to procure. Part 1 implied that despite the ambiguity surrounding the Defence Policy, Canada is expected to procure a fifth-generation fighter that is both interoperable and advanced. The first issue encountered, then, is that despite the competition for the contract being open, what options are there in the fifth generation class for $15-19 billion CAD?

Currently, there are three fifth-generation fighters in service or with flying prototypes: Lockheed Martin’s F-35 and its variants, the Sukhoi PAK FA, and the Shenyang J-31. The latter two are instantly disqualified for failing to meet conditions of interoperability, while also buying into an open competitor’s system of an adversary. Apart from this, there are other designs currently underway: the Indian HAL AMCA, the Turkish TF-X project, and the joint South Korean and Indonesian KF-X project, which will only be available in 2025 if current project deadlines are met, and native deployment is not prioritized. Even if these hurdles are conquered, there is again the issue of interoperability with NATO designs. The Saab Gripen E is sometimes mentioned as a competitor, but fails to live up to the same criteria as a jet like the F-35, which has greater stealth capabilities, larger maximum takeoff weight, as well as improved radar and sensor technology. The Gripen E is also the only plane mentioned that is not a dual engine system. The F-22, while capable of carrying a limited number of air-to-surface munitions on sorties, is an air superiority fighter, not a multi-role fighter capable of an infiltration role and radar suppression sorties. It would not fit the mission criteria of the RCAF. In sum, options are few; even states that previously indigenously produced their own fighters, like the European states behind the Eurofighter typhoon, are instead considering F-35 variants. For these reasons we assume the F-35 is the RCAF’s expected procurement project.

Despite the stated difficulties in contriving an accurate cost estimation for 88 advanced aircraft, it is still possible to demonstrate that the Defence Policy cannot credibly claim to be a transparent document that provides a fully funded, long term plan to sustain the Canadian Forces. The first caveat to this claim is that the $15-19 billion CAD allocated does not include long-term maintenance costs, yet the purpose of using an accrual basis of accounting is to take these costs into account, as displayed in Annex A of the policy. In fact, the section that accounts for long term maintenance, labeled ‘sustainment’ costs, comprises the bulk of procurement pricing. Hence, the methods reported to procure the new jets abandon the principles set forward by the policy to create a more transparent and flexible procurement plan. The likely outcome is for the Government to take advantage of the way accrual accounting works, and only begin costing the items on their delivery date, hence spreading the accrual costs deeply and irresponsibly into the future, past 2036. Delaying the payment of all development and acquisition costs for every procurement project into the future – by beginning to pay only when the product enters its ‘life cycle’- means unforeseen contingencies in the testing and development phase can drastically, and unexpectedly, increase costs, and with political pressure on the incumbent government.

In an uncannily familiar Canadian fashion, the fighter jet program is either doomed to either be severely over budget, or, a compromise on capabilities, should Canada procure 4.5 generation jets instead.