On June 11, Washington approved 6-monthexemptions on its Iranian sanctions to India, South Korea, Turkey, Malaysia, South Africa, Sri Lanka and Taiwan. This development follows the first round of extensions granted to 10 European countries and Japan on March 11.  Secretary of State, HillaryClinton lauded considerable reductions in Iranian oil consumption as meriting the waivers.

The US has recently stepped up efforts to pressure Iran to end its nuclear program by implementing tougher financial penalties on countries continuing to trade with the Islamic Republic. Under the NationalDefenseAuthorizationAct (NDAA), foreign financial institutions that conduct petroleum sales transactions with Iran’s central bank will be barred from maintaining associated operations in the US. However, a special provision within the bill allows the US to grant temporary waivers on its penalties to countries that have attempted to reduce their imports of Iranian oil.

The selectivity of these concessions reflects not only the United States’ ability to wield the sanctions as a deft political device, but also an exercise in restraint. International security is about the stabilization of global trade and commerce just as much as its about the freedom from physical threats.

Most of the countries granted sanction waivers depend on American military defence or investment, while the US in turn relies on their continued acquiescence to an economic system mediated by the dollar.  But this is a trade where the US can’t afford to carry too much of a deficit.

European Union states have extensive cultural, economic and military ties with the United States, popularly highlighted by the continued existence of the NATO alliance.  Other Asian states like Taiwan, South Korea and Japan require American support counterbalancing the perceived expansionist threats of North Korea and China.

Beyond the obvious trading partners, India also made the selection for sanctions relief. This development fits within the wider scope of the third annual US–IndiaStrategicDialogue on June 13, talks designed to warm otherwise cool relations between New Delhi and Washington. Both countries focused their discussion on broadening mutual defence cooperation through increased technology transfer, intelligence sharing and joint research and development.

“To grow and prosper, we need open, free, fair and transparent global economic systems. We both seek security and stability in South Asia and the Asia Pacific,” stated Hillary Clinton.  Over the past few years India has awarded $9 billion worth of defence contracts to American companies. Bilateral trade and investment is up $100 billion this year, an increase of 40% from 2009 when the first US-Indian Strategic Dialogue was launched.

India in turn wants reassurance of the United States’ regional guardianship over the continuing stabilizationprocess in Afghanistan and Pakistan beyond 2014.  This is of pressing significance given that it is the deadline for other NATO states to meet timetables for withdrawal. Both countries acknowledged the critical importance of expanding private investment and trade in Afghanistan to achieve this end. As the largest non-military actor in the country, India has contributed $2 billion in aid as part of its effort to guarantee stability once NATO fully departs.  As reported in the Economist, New Delhi in particular wants to be confident that neighbouring Afghanistan never again becomes a “Talibanised client of Pakistan.”

This is an outlay the US is happy to make, so long as it can also earn a return on its investment. Dubbed the “linchpin” of the State Department’s re-balancing strategy in Asia by defence secretary Leon Panetta, India is a growing competitor the US needs on its side to counter China’s rising regional influence. In the November 2011 issue of ForeignAffairs, Hillary Clinton observes:

“As the war in Iraq winds down and America begins to withdraw its forces from Afghanistan, the United States stands at a pivot point. In the next 10 years, we need to be smart and systematic about where we invest time and energy, so that we put ourselves in the best position to sustain our leadership, secure our interest, and advance our values.” 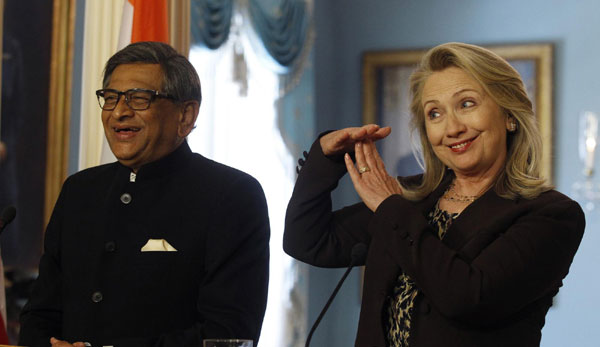 Time-out!. US Secretary of State, Hillary Clinton suspends questions from journalists at a press conference.

Reaching that position begins by investing sufficient diplomatic capital in India, a channel through which the United States can siphon greater influence into the coffers of the Indo-Asian regional leadership. The US has publicly endorsed India’s LookEastpolicy, but the corollary of that support is greater US encroachment on other exclusively Asian institutions. Commenting on the US-India relationship, HillaryClinton stated,

“Both our countries have significant stakes in the future of the dynamic Asia Pacific region, and we need to expand our work both bilaterally and through multilateral institutions such as the East Asia Summit and the ASEAN Regional Forum to work to build a regional architecture that will boost economic growth, settle disputes peacefully, and uphold universal rights and norms.”

Ensuring that the design of this framework will also reflect the US economic and political interests can be better assured by contracting a closer partnership with India.  As a stronger regional ally, India can provide the gateway to a larger Asian sphere of influence.

“Harnessing Asia’s growth and dynamism is central to American economic and strategic interests and a key priority for President Obama. Open markets in Asia provide the United States with unprecedented opportunities for investment, trade, and access to cutting-edge technology,” reiterated Clinton.

Yet despite rapidly increasing bilateral trade, barriers to investment in India’s economy still aggravate US and other Western companies. Foreign businesses often complain of inconsistent policy-making, entry barriers, and stalled reforms that are leading to market uncertainty and a loss of confidence in India’s formerly favorable  ‘Inc.’ status.  “Things are not happening at the required pace, so that has been the basic problem,” commented Soumya Kanti Ghosh, a director at the Federation of Indian Chambers of Commerce and Industry.

Timing is always of the essence.  Within two days of bilateral meetings with New Delhi in June, Washington issued a formal waiver to India, Iran’s second largest oil importer. Perhaps this diplomatic trade-off can help leverage other economic solutions in India to come.

Brianna MacGillivray
Brianna MacGillivray is a Research Analyst and was a Conference Coordinator at the NATO Association of Canada. She completed a BA in International Studies at Glendon College, York University with a focus in global political economy and Iranian culture and politics. Brianna hopes to blend these areas of research to examine the Western sanctions regime on Iran, as well as wider developments within the global financial system. Hailing from the United States, Brianna is also an avid runner with a passion for music, design and philosophy that colourfully impacts every endeavor to which she pursues. Contact: brianna.macgillivray@atlantic-council.ca

Melanne Verveer, who served as U.S. Ambassador for Global Women’s Issues, remarked that clashes had occurred in 31 of the world’s 39 active conflicts after peace settlements. None of the 31 cases had women involved in the peace process.