A man helping to rebuild the infrastructure in Afghanistan.

Ending the war does not end the human suffering that came as a consequence. With NATO announcing its intention of handing over security to Afghanistan’s national forces by the end of 2014, new attention needs to be given to the efficiency of Afghanistan’s institutions. Despite the comprehensive operations that have attempted to rebuild the country during the last 10 years of war, the country is still facing enormous challenges. Security operations aiming to dismantle the Taliban were an important part of the war doctrine. Winning the “hearts and minds” of the people was an equally important component to restoring stability in Afghanistan. However, a report issued by the Special Inspector General for Afghanistan Reconstruction (SIGAR) concludes that the reconstruction efforts behind the “hearts and minds” initiative are so far behind schedule that they might risk diminishing their ability to eschew support for the insurgency.

The government’s capacity to take on these projects is uncertain. An assessment of the capabilities of the Afghan Public Protection Force is needed to update and revise their training programs to best prepare them for their leadership role in these projects post-2014. To help ensure positive outcomes from the reconstruction effort, a second important area in need of improvement relates to the legal institutions that safeguard the rule of law. Strengthening the legal institutions to protect against corruption is vital to the stability of the country and the success of the reconstruction projects.

COIN: Outlining the Counter-insurgency Doctrine and the Importance of Reconstruction

Since the 1990’s, the nature of interventions has drastically changed. Previously, interventions centered primarily upon achieving military victory. However, the recent trend in military interventions reflects an increasingly global commitment to human rights, whereby the military is more involved in peace and nation-building, particularly counter-insurgency operations.Counter-insurgency (COIN) as defined by the US Army is the: “military, paramilitary, political, economic, psychological, and civic actions taken by a government to defeat insurgency,” in which both sides of the conflict compete for political power through popular support. COIN operations are extremely difficult to conduct because the playing fields are uneven, while maintaining security in a hostile environment requires extensive resources.

Counter-insurgency forces seeking to preserve legitimacy must remain honest and ensure that their commitments are reinforced by their actions.  Since fostering effective governance by a legitimate government is the primary goal of any COIN operation, methods have been constructed around winning the “hearts and minds” of the population in order to eliminate support for the insurgent and effectively build new institutions for domestic stability. Therefore the foundation of this strategy is fundamentally about development. Development entails improving health, education, food security, economic growth, employment opportunities, institutions, safety and security, human rights, and the rule of law.

To achieve these objectives in Afghanistan, NATO has embarked on multimillion dollar reconstruction projects, which have been extremely valuable to American efforts in countering the Taliban insurgency. If the 2013 budget is approved, the US will have spent $100 billion in Afghanistan on reconstruction as a part of their own counter-insurgency framework.

USAID’s Afghanistan Stabilization Initiative-East (ASI-East) program’s objective was capacity building and increasing support for the Hamed Karzai government. This program began in February 2010 with a $151 million budget. The ambitious project was developed in 10 districts in four eastern provinces. This program gives grants to local implementers to generate employment opportunities, access to public services, and improve local infrastructure. The budget was renewed this year with an estimated completion date in 2015. However, the SIGAR report highlights that despite being 2 years into the program, these regions are still unstable and have not moved on to the next program phase: “build”, which is intended to stabilize the targeted districts.

Poor coordination and funding schedules have negatively impacted the ability of the reconstruction projects to attain their objectives. The SIGAR report also highlights that 5 out of 7 of the 2011 AIF projects are lagging between 6 to 15 months behind schedule, with many delays caused by funding impediments. Consequently, the objectives of the COIN projects may not be achieved for several years. Other program delays are caused by poor program planning. For example, the Southeast Power System project was designed to provide power for Kandahar and the Hilmand provinces; already the main provider of electricity to 380,000 of the 1.7 million people in the region. Yet the SIGAR report highlights that finishing this project is dependent upon the completion of other projects – some of which have not been started or even been allocated funding. Consequently, John Sopko, Special Inspector General for Afghanistan Reconstruction, states: “In some instances, projects may even result in adverse COIN effects because they create an expectations-versus-reality gap in the affected population or because they lack citizen support.” 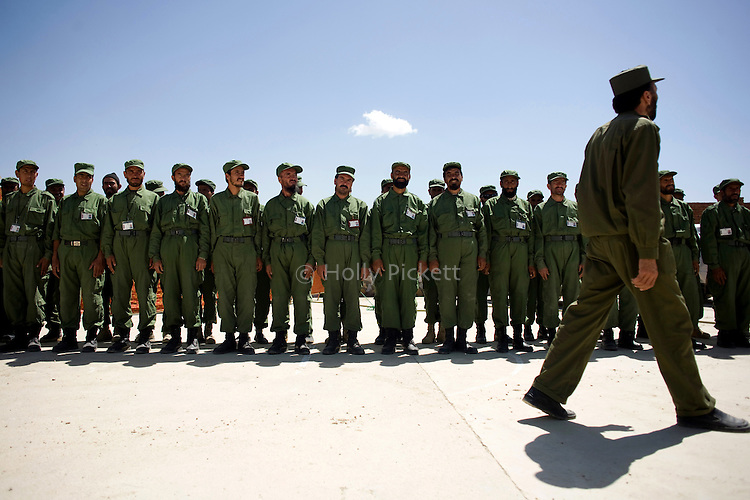 Eighty-three new graduates of the National Protection Force before their honor ceremony. they will join a pilot program to that is aimed at securing local communities.

The Reality of Aid in Afghanistan

The large flow of money coupled with the poor institutions and economic situation in the country have made Afghanistan one of the world’s most donor dependent countries. International donors cover roughly half of Afghanistan’s annual budget. The World Bank report, “Afghanistan in Transition: Looking Beyond 2014,” shows that military and civilian aid in 2010/2011 amounted to $15.7 Billion, while the country’s GDP was $15.9 billion. Both the World Bank and SIGAR report stress that this amount of assistance cannot be sustained. In the SIGAR report, it was shown that there is a deficit of 33% for the years of 2014/2015 between the country’s revenues and what the international community promises in assistance. Donor dependency also created opportunity for “mismanagement, waste, and corruption” according to the World Bank.

Worse yet, the commitments made by the international community towards rebuilding Afghanistan have raised the populations’ expectations. These promises encouraged many refugees to relocate to the war torn country. The repatriates arrived with a new set of needs and applied more pressure to the reconstruction effort. Unfortunately, by the time of the presidential inauguration of Hamed Karzai in 2004, the population’s frustrations towards to the slow reconstruction projects had steadily mounted. Therefore, the Afghan army and legal institutions need to be well prepared to take over these deficient projects in order to provide the best possible outcome for development. Better reconstruction will improve the livelihoods of Afghans, as well as diminish support for the Taliban.

Does the government have the capacity to take on the reconstruction projects?

Karzai’s administration has been publicly criticized for its significant corruption. Channeling more international funding through that administration causes risks for mismanagement. Human Rights Watch reports that, “the Afghan government continues to give free rein to well-known warlords and human rights abusers as well as corrupt politicians and businesspeople, further eroding public support.” Moreover, Afghanistan’s justice system and courts remain weak and therefore incapable of holding leaders legally responsible for their actions. Accountability within these institutions needs to improve dramatically in order to maximize the benefits and reach of reconstruction.

Another significant challenge for reconstruction in Afghanistan is security. A lot of resources have been invested in training the Afghan National Security Forces. Nonetheless, reports on Afghanistan’s security are not optimistic. Recent information of 11 Afghan police who defected to the Taliban is indicative of the future of Afghanistan if reconstruction projects fail and the country continues to live in disarray.  BBC reports shows that this is the second police defection in recent months, which included the defection of 13 officers in the western Farah province at the end of July. In the first half of 2011, 24,000 soldiers had defected from the national forces. Local elders blamed the government for failing to pay these officers within a reasonable time-frame.

State owned Afghan Public Protection Force is likely to take over reconstruction projects in 2014. The oversight evaluations of these national forces are behind schedule and therefore an accurate analysis of their capability in achieving such tasks is hard to measure at this time. The last evaluation, conducted in 2011, highlighted that the Afghan Public Protection Force was unable to assume most of their responsibilities as of yet.

What Does This Mean For The Future of Afghanistan?

The unsuccessful outcomes of the reconstruction projects in Afghanistan are not surprising. Development is a long-term goal that requires sustained efforts to be successful. This does not mean that the reconstruction effort in Afghanistan is doomed to fail, however these facts help to put these issues and projects into perspective. Hopefully this will reorient donors to firstly, focus on repairing the dysfunctional reconstruction projects, such as the border police bases outlined in the SIGAR report. Secondly, to finish the ones that are started before beginning new projects in order to avoid overburdening the Afghan economy and labor force after NATO withdraws.

A significant improvement in socio-economic relations will come once Afghans are in charge of the reconstruction projects. With the unemployment rate in Afghanistan reaching 35%, the local populations stand to benefit tremendously from the new employment opportunities that would arise once American contractors leave. There is also optimism that local knowledge would help create more efficient reconstruction efforts. Furthermore, improving local knowledge and capacity will contribute to long-term development in significant ways.

Nonetheless, these development projects are useless if the country does not have the ability to maintain them through the acquisition of qualified personnel, technology, planning and oversight mechanisms. As such, more attention needs to be paid to the forces that will be in charge of taking over these reconstruction projects post-2014, as well as the institutions that will hold them accountable for their actions. The report evaluating the progress of the Afghan Public Protection Force is required to adopt the necessary changes in training prior to 2014. Lastly, to ensure oversight of the reconstruction projects and to minimize corruption, it is necessary to have legal institutions that protect the country’s integrity. Guarantees in these areas will help Afghans enter the post-war phase with a social contract in good faith, which would ultimately improve living conditions and diminish support for the Taliban.

The Folly of the Fifth Generation?: A Look at the Future of Fighter Aircraft

As airstrikes against IS are carried out and an F-22 has successfully carried out its mission, Christopher Cowan looks at the future of the Fifth Generation of fighter aircraft.

When Airstrikes Go Wrong: Examining the Narrative After the Mosul Airstrike

With the recent increase in civilian casualties from coalition airstrikes in Iraq and Syria, Farah Bogani examines the narrative emerging from the Mosul airstrike.