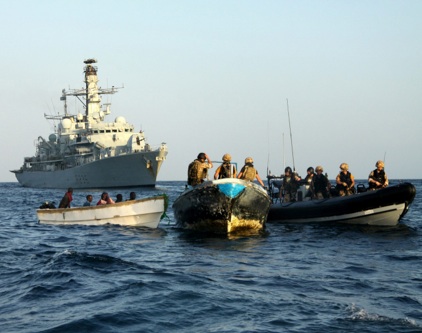 A few weeks ago, British Prime Minister David Cameron made a commitment to send British troops to Somalia to help with peacekeeping and the fight against al-Shabab. The move is seen as a way to help Somalia and prevent further migration and decrease terrorism and piracy around the Horn of Africa.

Piracy around Somalia is well known around the world. In recent years, there has been a decline in piracy activities, but the same cannot be said for Southeast Asia. In 2015, the Southeast Asian waters have been attracting an increase in piracy, particularly around the Straits of Malacca.

Southeast Asian Piracy on the Rise

Though recent data points to a decline in pirate attacks around the Horn of Africa, it also shows an increase among Southeast Asian waters. The waters surrounding the Singapore Strait and the Strait of Malacca are especially targeted because it is currently the world’s busiest commercial trade route. Most of the trade passing through is between China and Europe. Crude oil from the Persian Gulf also travels through to Asian economies like China, Japan and South Korea.

The International Chamber of Commerce (ICC) International Maritime Bureau released statistics taken from January to March of this year that shows that 30 armed robbery and piracy incidents have taken place in Southeast Asia so far this year.

The International Maritime Bureau also has a live map that shows regular updates of piracy and armed robbery attacks for 2015. Looking at this live map, the focus of most attacks has been in and around Southeast Asian waters, especially the Strait of Malacca. The map highlights attempted attacks, ships boarded, fired upon, hijacked and suspicious vessels. The International Maritime Bureau also has up-to-date piracy and armed robbery reports for 2015. Does this mean that pirate attacks around Somalia have declined for good? Well, there have been recent warnings this year that a new outbreak might occur.

The Impact of Piracy on Countries

Piracy affects countries is numerous ways. Global trade and security on international waters become jeopardized as pirate attacks increase. Trade routes that ship billions of dollars of economic capital become affected when cargo is stolen. Countries also pay significant amounts to pirates in ransom money or invest heavily in rescue operations for hostages. Furthermore, companies and countries who own the shipping boats have to invest heavily in the protection and security of their ships through private companies who provide the service, and the cost of insurance also continues to rise.

The prosperity and economy of countries are affected every time pirates stop cargo ships. In Britain’s case, piracy off the coast of Somalia affects billions of pounds of UK trade passing through those waters. The higher costs that are associated with lost cargo, longer shipping times and so on get passed on to consumers. Losses from one country affects others because of the increasingly interconnected global markets. According to the United Nations’ International Maritime Organization, more than 90% of the world’s trade occurs by sea.

There is a lack of international coordination in the policing and persecution of pirates. Often, when countries apprehend pirates at sea, it becomes difficult for a single nation to investigate and prosecute a single pirate. This is because it requires a collective effort. A single ship could be owned and operated by many countries with multinational crews. Issues such as proper evidence, having the necessary laws domestically within the country pursuing prosecution of a pirate, and international agreements on the laws all complicate the matter. For example, if a pirate committed multiple offences within multiple borders of various countries, then where should the pirate be prosecuted. If found guilty, who will confine the pirate to serve his sentence?

In terms of collecting evidence, a country needs to invest in training, equipment and the quality and quantity of their evidence due to the marine environment. Proper evidence will help the country pursuing criminal charges and make it easier to identify and arrest other individuals involved in piracy, as well as where their assets are located.

International Effects to Combat Piracy
An international agreement among countries would help facilitate data exchange because a single case in piracy can affect many countries. If cases are to be prosecuted more effectively at the international level, then information also needs to be shared with multiple law enforcement agencies and judicial systems.

Moreover, international agreements can be vital partnerships globally to reduce, prevent and prosecute maritime piracy. The spread of piracy to other areas of the world, as we currently see in 2015 with Southeast Asia, shows that short-term solutions, such as paying off pirates are not the answer. In fact, it could help fund terrorist groups. Furthermore, countries who continue to invest in short-term solutions are effectively making the problem of piracy more costly than it should be.

The United States recently held the 18th Plenary of the Contact Group on Piracy off the Coast of Somalia on July 8 of this year. Over 80 countries attended, along with international organizations and companies.

Japan also recently took efforts to combat piracy off the coast of Somalia. Japan’s foreign policy regarding piracy has been updated in 2015. For example, Japan’s Cabinet has extended a mandate to July 23, 2016, of the Act of Punishment and Countermeasures against Piracy. This act criminalizes piracy and allows naval vessels to protect any ship from pirates regardless of the country flag that is flown on the ship. Japan also enacted an Act on Special Measures Concerning the Guarding of Japanese Ships in Pirate-Infested Waters which allows private companies to have rifles on board Japanese ships and tankers on pirate-invested international water routes.

From September 14 to 15 of this year, the International Maritime Bureau (IMB) International Meeting on Global Piracy, Armed Robbery and Maritime Security took place in Kuala Lumpur, Malaysia. This meeting was co-hosted with the Malaysian Maritime Enforcement Agency, Interpol and the Royal Malaysian Police. Keynote speaker Malaysian Deputy Prime Minister Datuk Seri Ahmad Zahid Hamidi, commented about the increase of piracy in Southeast Asia and the need for cooperation among nations bordering the region to help prevent further increase in piracy activities.

What the Future Holds for Piracy and International Efforts

Piracy is becoming more of a problem than it should be, whether it is around the Horn of Africa or in Southeast Asian waters. The international community is spending more on the problem than it should be. The short-term solutions of spending more money on protection of ships, paying ransoms and law enforcement is not providing any long-term impacts. A collective effort is needed.