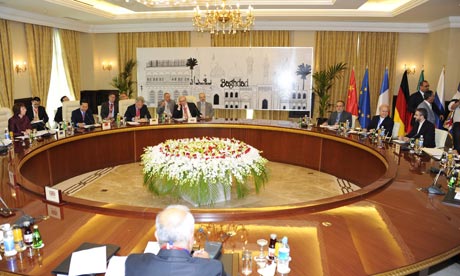 Six world powers meet with Iran in an attempt to diffuse tensions over its nuclear enrichment program.

Talks in Baghdad with the five permanent members of the UN Security Council and Germany have resumed over Iran’s contentious nuclear program. The negotiation process is likely to be a long one and no breakthrough accords are expected at this meeting.

The debate has boiled down to Iran claiming it has a right to enrich uranium as a signatory of UN nuclear treaties, while the West fears Iran could potentially use this expertise to build atomic weapons.

At the centre of the debate are the devastating economic sanctions that are crippling the Iranian economy, and by extension its civil society.

Iran has the highest number of executions in the world per capita, coming second in terms of numbers after China. It’s a country that regards a woman’s life as equal to half a man’s life. Yet the UN Security Council’s permanent members—who all have nuclear weapons themselves—have preoccupied themselves with Iran’s nuclear capabilities instead of the plight of ordinary Iranians.

Hamid Ghassemi-Shall, a Canadian citizen, has been in the notorious Iranian prison of Evin for three years as a political prisoner, but Ottawa has done very little to speak out about the horrific situation that the world has chosen not to notice. During the 2009 fraudulent reelections of President Mahmoud Ahmadinejad, the Obama administration also showed restraint in its stance towards Iran even though Amnesty International described the violence as the worst Iranian human rights violations in 20 years. This lack of involvement on the part of the international community presents a sharp contrast to the attention Iran’s nuclear program receives. In fact, it has long been surmised that the West would be quick to sacrifice human rights and democratic aspirations of the Iranian people for the sake of securing a nuclear deal with the Islamic Republic.

Understanding the democratic passions that underlie Iranian society is crucial when considering the nuclear ambitions of the state. Iran is essentially a mercantile-militaristic state, with a concentration of wealth and power in the hands of the Iranian Revolutionary Guard Corps (IRGC). However, efforts by women’s groups have awakened a democratic pulse within Iran that is infusing a new moral ethos of change. 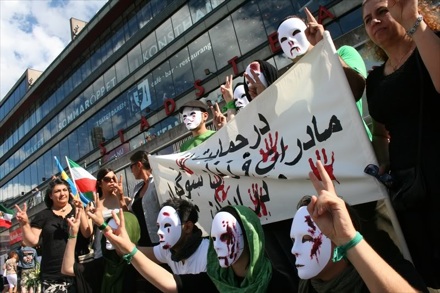 The Mourning Mothers of Iran in silent protest in Tehran.

Women’s organizations like the Mourning Mothers have made nonviolent resistance a fundamental moral value of Iranian political life. They gather every Sunday in Tehran to take part in sit-ins until their children are released from prison. Many of these mothers are beaten and arrested, but their peaceful gatherings persist today. These are overarching ethical values of nonviolence and civil disobedience that are guiding people’s democratic aspirations and slowly making inroads within the  country. Military threats and sanctions against Iran threaten to undermine the work of these actors.

Sanctions are detrimental to the middle classes, who are the economic backbone of the reform movement. Despite being one of the richest countries in the world (ranked 25th according to the International Monetary Fund’s 2011 GDP statistics), Iran has high rates of unemployment. Citizens seem less concerned with the looming threat of war than with the country’s inflation rate reaching close to 30%, and an unemployment rate of 11.5%. These hardships seem to disproportionately affect ordinary Iranians, while those connected with the regime’s “favoured dreary” appear to be living life as the rich and wealthy are in New York, Paris, and Rome.

Many countries like Israel, India and France all have nuclear weapons. However, they have not been making headlines as much as Iran and there are at least two reasons for this.

First, the Iranian leadership has repeatedly said Israel is an illegitimate country and should disappear from the face of the earth. Second, and perhaps more importantly, Iran has repeatedly denied the Holocaust, a core element of modern Jewish identity.

While these claims are absurd, it’s important to acknowledge that these are the views of the leadership of the Islamic Republic and not the views of the civil society. An important fact that the West seems to forget is that because Iran is not a democracy, its leaders are not representative of its people. As such, any sanctions adopted should be aimed at the Iranian leaders not the civil society.

Recently, a remarkable thing happened. Thousands of activists in Israel and Iran have used social media to announce their support for one another. The campaign is unlikely to make headway, but it says something about the power of civilians and social media in both countries. Two Israelis started this campaign and now thousands of Iranians and Israelis have endorsed it and sent similar messages. The civil societies of both countries are coming together and saying we don’t want war, yet the leaders of both countries are adamant to continue with their agendas. 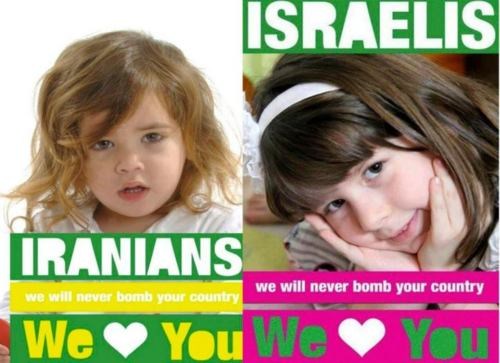 While no breakthrough results are expected at the Baghdad meeting, leaders of the West must take into consideration that Iranian civil society is looking for change. Calls for war and tightening of sanctions stifle opportunities for dialogue within Iran.

A model of non-violence and civil disobedience in line with the Green Movement that began in 2009 is the best course for the future of Iran. International isolation and pressure on the Iranian state will lead the government toward further repressive measures. Military intervention will only make things worse.

Furthermore, it appears that any military intervention in Iran will lead to a self-fulfilling prophecy. Iran has not yet decided to weaponize, as it claims it only seeks nuclear reactors for energy and research, but if Israel or the West were to take military action this outcome would become more likely. Unless all parties agree to make concessions, a great opportunity will be lost. Mahsa Alimardani (left) is a fourth year student in Political Science and Near and Middle Eastern Civilizations at the University of Toronto. She’s been a reporter  for Taiwan’s Taipei Times, as well as a writer and broadcaster for U of T’s radio station CIUT and newspaper The Varsity. She’s been part of the communications team for MSF/Doctor’s Without Borders, and recently completed her senior honours thesis on the women’s movement in Iran and plans to pursue graduate studies in human rights.

Semra Sevi (right) is a Political Science and History student at the University of Toronto. Her works have been variously published in the University of Toronto’s The Varsity, The Newspaper, and The Gargoyle as well as Harvard University’s The Crimson. Semra has worked as an analyst and lead analyst with the CCR2P, G8 and G20 research groups at the Munk School. She is currently compiling research for an independent project on the topic of student voter turnout in the 2011 federal elections under the supervision of Michael Ignatieff.

In response to the increasing number of Canadians purchasing one-way tickets to Syria to join the ranks of ISIS, the RCMP is enhancing domestic counterterrorism strategies to disrupt the radicalization process, which threatens not only vulnerable targets but also the overall Canadian public.

Unrest Erupts in Yemen Amid Concerns of a Humanitarian Crisis

By: Nabila F. Qureshi In the worst violence Yemen has seen in several months, four days of bloodshed resulted in over 75 people killed and hundreds more injured in the capital of Sanaa.  Troops loyal to President Ali Abdullah Saleh opened fire on protesters, sniping civilians from rooftops while other security forces dispersed tear gas Read More…