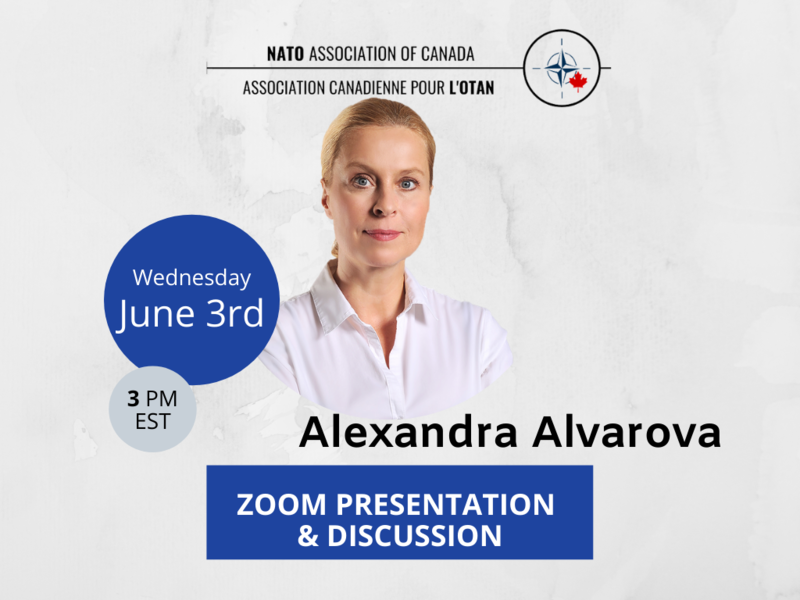 On June 3rd, 2020, the NATO Association of Canada hosted a moderated Zoom discussion with the NATO Association’s Editor-in-Chief Dr. Joseph McQuade and Alexandra Alvarova who is working to unmask malicious information operations through her work. The discussion focused on propaganda, hybrid-warfare, data-weapons, artificial intelligence and disinformation.

Alexandra Alvarova has worked in communications, political- marketing and election-campaign management ever since 1996. From 1996 to 2006, she served as Head of the Mitteleuropa Working Group associated with the School of Journalism, Friedrich Funder Institute, Political Academy ӦVP, in Vienna, Austria then as the head of the marketing department for OK System, in Prague. In 2012 the Christian Democratic Union-Czech People’s Party hired her to lead the party’s political-marketing and press-office sections and to serve as the party’s official spokesperson. She lead the party through two successful elections in 2012 and in 2013. In 2014, she accepted a prestigious assignment as Advisor for Public Relations to the Head of the Legislation Committee of the European Parliament in Brussels. At the pinnacle of her career, in the aftermath of Russia’s 2013 hybrid-war invasion of the Czech Republic, Alexandra relinquished the post and, citing concerns for her children’s future, relocated her family to Canada. She works as a marketing supervisor, communication strategist and social-media-content editor in Vancouver, British Columbia, Canada. Alexandra Alvarova is a recognized authority in political marketing and public relations, a sought-after seminar leader, facilitator, and public speaker. In 2017 she wrote The Industry of Lies, a non-fiction work that introduces, outlines and fully supports a core concept: “Russia used the 2013 presidential election in the Czech Republic as a trial run to perfect its hybrid-warfare aggression for altering the outcome of the 2016 US Presidential elections.”

Joseph McQuade is Editor-in-Chief at the NATO Association of Canada, where he runs the Centre for Disinformation Studies program. He is also a Postdoctoral Fellow at the University of Toronto’s Asian Institute at the Munk School of Global Affairs and Public Policy and a Managing Editor of the Journal of Indian Ocean World Studies. Dr. McQuade completed his Ph.D. at the University of Cambridge as a Gates Scholar, with a dissertation that examined the origins of terrorism in colonial India from an international perspective. This research forms the basis of his first book, A Genealogy of Terrorism: Colonial Law and the Origins of an Idea (forthcoming from Cambridge University Press in November 2020). Dr. McQuade has also published widely in academic journals such as the Journal of Imperial and Commonwealth History, the Journal of World History, and History Compass, and has commented on current affairs for national news broadcasters such as CBC and CTV. Information on his forthcoming book can be found below: https://www.cambridge.org/core/books/genealogy-of-terrorism/BC74FB48CED9CBA2F2DC8B9C580FE714