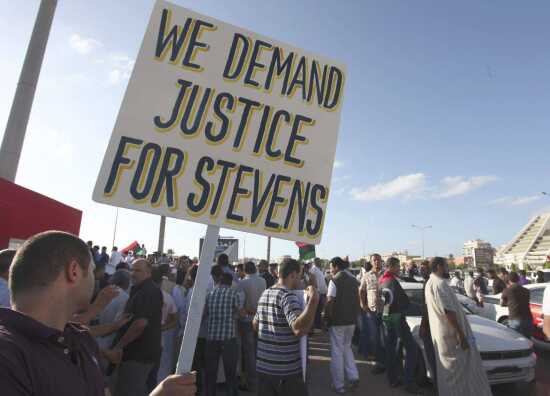 Libyans protesting against militias in Benghazi.

Protests continue to hit the streets of Libya, though with anger now directed towards members of its own population rather than the incendiary, anti-Islamic YouTube film that captured the world’s attention earlier this month. On September 21st, tens of thousands of protesters stormed the headquarters of Ansar al-Sharia, the militia whose members are widely believed to be behind the September 11th attack on the US Embassy that left Ambassador Christopher Stevens and three of his colleagues dead. Libyans appear to have reached the limit of their tolerance for the relative impunity with which militias and former rebel brigades are able to operate, as many see them as the cause of the deteriorating security situation within their country.

In response, the interim President Mohammed el-Megarif, ordered that all militias not sanctioned by the state must disarm within 48 hours. The next day it was announced that the leadership of two of the country’s most powerful state-sanctioned militias—the Feb 17 Brigade and the Rafallah Sahati Brigade—would be replaced with official military units. Although the militias have technically come under government command, it still remains to be seen what the effect of this new command structure will be, if any. The likelihood that the militias will continue to operate in the same manner as before should not be ignored.

The government has been the subject of heavy criticism for its failure to adequately address the militia situation within its own borders. Although disbanding militia units was indicated as a top priority after the formation of the National Transitional Council (NTC) in November 2011, the state has been ill equipped to see it through. Instead, the government has been relying on the power of militias to help fill the security vacuum left after the fall of the old regime, entrusting brigades with providing security for government institutions such as hospitals, airports, borders and even elections. The fall of the Gaddafi regime left the army and police in shambles, with diminished supplies, personnel and equipment. In a country suffering from a host of inter-communal conflicts exacerbated by 42 years of a divide-and-rule strategy, security is the greatest hurdle facing this newly recovering state.

For now, it would appear that some militias such as Ansar al-Sharia have followed the orders of President Mohammed al-Megarif to disband. But Ansar al-Sharia is just one among many, and other non-sanctioned militias still roam the streets. It still remains to be seen what the exact effect of the order for militias to disband will be. We must bear in mind that disbanding is only one part of the process; if this order is not followed by the disarmament and reintegration of former rebels and militia members, it may do more harm than good. What is also worrisome is what will happen to these militia members now, given that their weapons have disappeared with them and their location is unknown. It is naïve to assume that these young men will simply give up their arms and go forward leading a normal civilian life.

There have been some positive steps forward in this regard, such as a weapons-collection drive which was recently held in several Libyan cities. Organizers estimate that about 1000 men and women turned in weapons, though in a country with an estimated 200 000 armed civilians, much work remains to be done.

What Role for the International Community?

The interim government needs technical assistance in many areas to help with the disbandment and reintegration of former rebels and militia members. Many analysts credit NATO with making the right decision to not send foreign stabilization troops to the ground after the fall of Gaddafi, however this does not mean that there is no role for the international community in this process. Indeed, in a country with a weak history of centralized control of the state and an interim government lacking the technical know-how to adequately centralize and institutionalize power, assistance from foreign governments, non-governmental organizations and intergovernmental organizations may be crucial to the successful rebuilding of post-conflict Libya.

One of the most crucial aspects of disbandment and reintegration of militia members will be job creation, as there is little incentive for militia members and rebels to give up their arms without satisfactory jobs waiting for them on the outside. The international community can help in this regard, assisting in the creation of capacity building and vocational training programs.

The transitional ruling authority’s approach of in essence subcontracting security to revolutionary brigades and militias may be working in the interim, but it is certainly not a long-term solution. As a result of the government’s haphazard policy, militias have become both the greatest menace to and largest protector of security within Libya. This trend cannot continue, and needs to be reversed now before it becomes too late. With such widespread popular support for the disbandment of militias, there may never be a more opportune time for the government to take action.

When can you negotiate with terrorists?

Tyler Amos comments on terrorist negotiations and the US decision to initiate talks with the Taliban in Qatar.

As ISIL expands its control over Iraq, Aren Saakyan argues that the consequences of supporting the Syrian Opposition will be much greater for the United States than the costs of supporting the Taliban during the Soviet Invasion of Afghanistan in the 1980s.