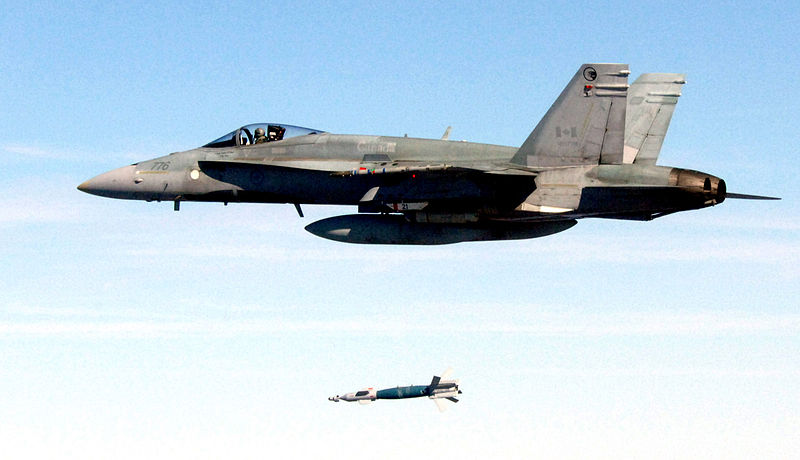 Canada’s role in the Middle East is undoubtedly one of the most disputed and controversial issues during this election period. The country joined the U.S.-led coalition to combat ISIS last year, and currently has six CF-18s, an aerial refueller, two surveillance planes and about 600 personnel involved in the air war, as well as 69 special forces training Kurdish fighters. The commitment could run until the end of March. Defence Minister Jason Kenney revealed last April that the total cost for the mission could top $528 million.

The Canada First Defence Strategy, Canada’s last detailed defence strategy, was rolled out in 2008. It was focused on military expansion, and included provisions to add thousands more troops and buy new tanks, helicopters, and transport planes. With the changing economic and global climate, all three parties have agreed that Canada’s defence policy must be updated. On the degree and direction in which it should change, however, the parties diverge.

Current Prime Minister and Conservative leader Stephen Harper has continually defended Canada’s presence in the Middle East, insisting that continued military action against ISIS is the best way to resolve the conflict and the current refugee crisis. In an interview with Peter Mansbridge, he told the chief correspondent for CBC that “we have to be in for the long haul,” and that “it remains important … that we keep this organization on the defensive.” Indeed, Harper has emphasized the war in Iraq during the election campaign, along with his plans to increase defence funding to stay ahead of inflation.

Liberal leader Justin Trudeau has pledged to end Canada’s bombing campaign in Iraq and Syria. He has also called for a more local solution to the problem, telling Mansbridge: “we have to be part of the training of the local groups on the ground in order to carry the fight effectively against ISIS.” He has called for a renewed focus on “defending North American airspace,” rather than engagements overseas; and for a “leaner” Canadian Armed Forces that would be “more agile and better equipped.”

NDP leader Tom Mulcair has said that one of his first acts as Prime Minister would be to pull the Canadian Forces out of Iraq and Syria. In an interview for The National, Mulcair told Peter Mansbridge, “we will immediately stop the bombing mission and bring those troops home.” This promise is tied to the NDP’s larger mission for Canada to “start playing a positive role for peace”. The NDP voted against Canadian involvement in the U.S.-led coalition, and has argued that continued warfare in the Middle East is a bigger threat to Canadian security than ISIS itself.

Each policy position has its merits, of course. George Petrolekas, a retired colonel, argues that withdrawal could be seen as a possible credibility issue for Canada among international partners, something that Harper and the Conservative party have mentioned time and time again. Retired colonel Michel Drapeau, on the other hand, sees some merit to the option: “I find it a bold, but courageous decision,” he told CBC News, adding that Canada’s military contribution in the war on ISIS is “symbolic more than anything else.”

With ISIS continuing to take centre stage in global politics, and the refugee crisis worsening, Canada’s role in the Middle East will be scrutinized more than ever. Regardless of which party is elected, its leader will have to defend what will undoubtedly be a much-debated policy choice.