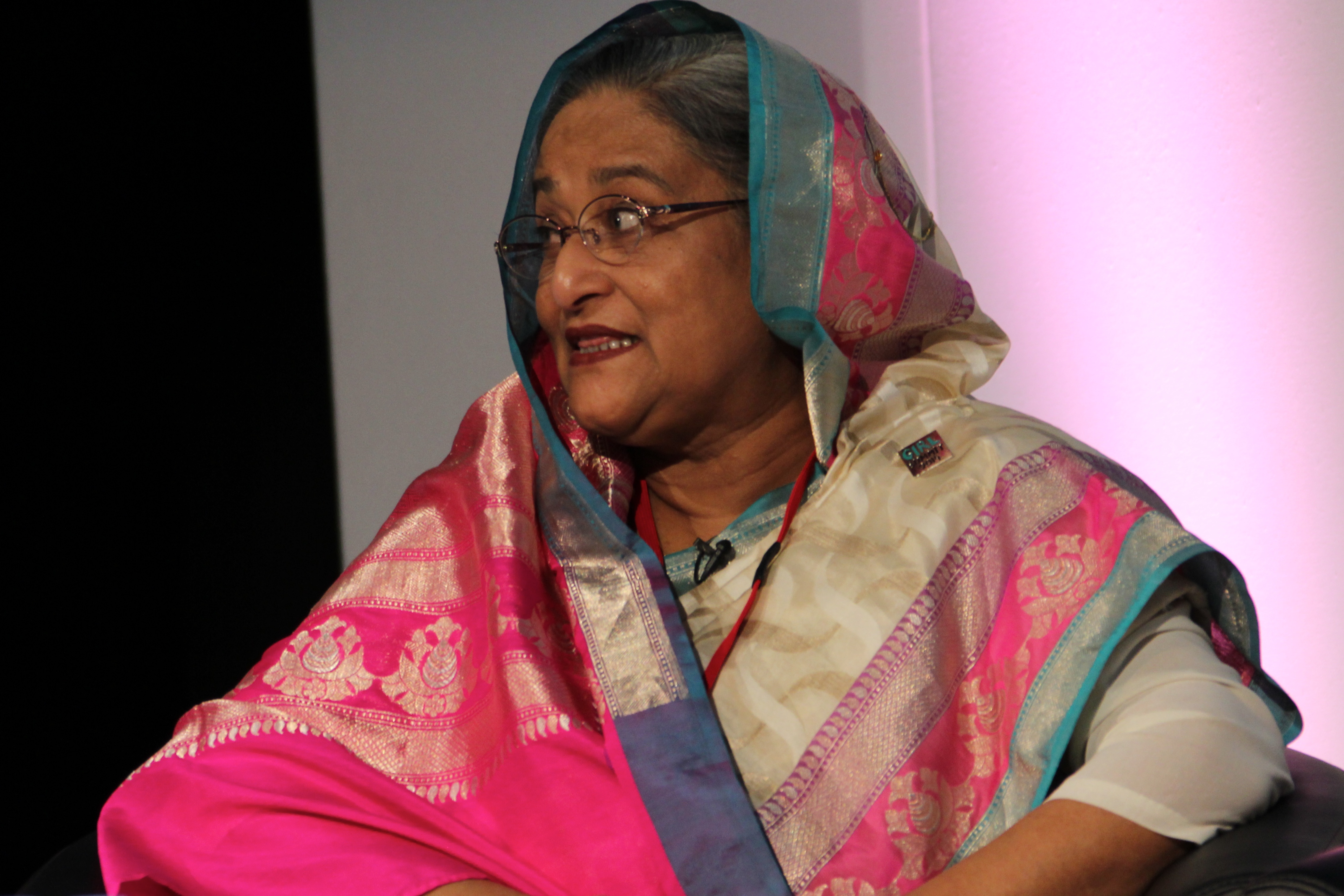 Hasina inherited politics through her blood. In 1947, Sheikh Hasina was born to Sheikh Mujibur Rahman, the founder and first president of Bangladesh, in the midst of the political riots following the creation of Pakistan. Her father was arrested a couple of times prior to the creation of Bangladesh on charges of conspiring against the Pakistani state. In 1970, Mujib founded Bangladesh and led the Awami League (AL) to become the most popular party in Bangladesh. As leader of the party, Mujib became President.

In 1975, Mujib was murdered in a coup by army officers, along with his wife, three sons, two daughters-in-law and approximately 20 others. This left Hasina and her sister Sheikh Rehana as the only surviving children of Mujib (they were out of the country at the time of the coup). For the next six years, Hasina went into an exile, during which she was elected into the leadership of the AL, the political party founded by her father.

She ran in Bangladesh’s parliamentary elections under the next military dictator, President Hossain Mohammad Ershad, and became leader of the opposition. In 1991, after the fall of General Ershad’s government, Bangladesh’s first elections took place, in which the Bangladesh National Party’s (BNP) Khaleda Zia, wife of the late military General Zia-ur-Rahman, succeeded in gaining a majority in parliament.

Since then, Hasina’s AL and Zia’s BNP have alternated in and out of the government’s majority in Bangladesh. Hasina served her first term as PM from 1996 to 2001 and her second term from 2009 to 2014. She became the PM of Bangladesh for the third time after winning the 2014 general elections by default (the elections were boycotted by the BNP-led alliance that year).

During Hasina’s first term as PM, she had the killers responsible for her father’s assassination, who were residing in Bangladesh, arrested and put on trial. In 1998, they were found guilty of Mujib’s murder. However, Hasina lost the next general elections and the new government, formed by Zia, did not pursue the case for political reasons. In her second term as PM, Hasina initiated the appeals process and, in 2010, five of the ex-army officers convicted of Mujib’s murder were executed. Six others remain in hiding abroad.

Cases of War Crimes from 1971 and the Jamat-e-Islami

In 2009, Hasina’s government created the International Crimes Tribunal, Bangladesh (ICT-BD) to investigate suspected cases of war crimes committed by anti-independence organizations during Bangladesh’s 1971 independence war against Pakistan. So far, all who have been prosecuted at the ICT-BD are Bangladeshi citizens. Most of them are members of the opposition party Jamat-e-Islami (JI), the largest and only Islamic movement in Bangladesh, and Zia’s BNP.

The JI were opposed to the creation of Bangladesh because they were worried that it would divide the Muslim community in a unified Pakistan. Ali Hasan Mohammad Mujahid, the secretary general of the JI and ex-minister, was executed November 2015 after being sentenced to death. Back in 1971, he was a student leader who opposed the independence of Bangladesh. He was found guilty of a number of charges including abduction and murder, all of which he denied.

Salahuddin Quader Chowdhury was a former BNP member of parliament who was also executed last November. His father was the late Fazlul Quader Chowdhry of the Muslim League (the main political party that campaigned for the division of India into two states in 1947) and the speaker of the National Assembly of the undivided Pakistan. Salahuddin was found guilty of nine charges including genocide, arson and persecuting people on religious and political grounds.

The hanging of both of these political leaders resulted in the eruption of violent protests. Paramilitary forces had to be deployed in Dhaka to maintain law and order.

In 2013, the JI was banned from contesting the 2014 general elections by a Bangladeshi court, citing its ideological contradictions with the country’s secular democratic principles. Zia’s BNP was already boycotting the 2014 elections.

Last year, Hasina came under fire from international and national critics after her government refused to accommodate the Rohingya Muslim refugees being persecuted in Myanmar on religious grounds. In an interview with Al-Jazeera, she said that Bangladesh is already overpopulated and cannot accommodate any more Rohingya refugees. She also went on to say that the Rohingya are Burmese citizens and it is up to the Burmese government to decide how they want to treat them. These controversial remarks sparked international outrage.

Facing the Upcoming Wave of Terror

Hasina’s government is facing a new challenge as the rising wave of terror deteriorates the law and order in Bangladesh. The Ansarullah Bangla Team (ABT) is a local Al-Qaeda-inspired radical group that has claimed responsibility for recent attacks on secular bloggers, political activists, foreigners and religious minorities. In October 2015, publishers of secular and atheist texts were attacked at their publishing houses. Members of the banned terrorist group Jama’at ul Mujahideen Bangladesh (JMB) were recently arrested on charges of murdering a Hindu priest. A Shia mosque was attacked last year, and Christian priests have been threatened.

Hasina’s government must deal with the new challenge of the growing extremism in Bangladesh. The hanging of Salahuddin and Mujahideen last November resulted in violent protests, and the rise in political violence and political divisions could provide international terrorist groups like the Islamic State (IS) the opportunity to recruit local people who are disgruntled by their state. To prevent this, political issues between the AL and the opposition parties must be resolved. Whether this means holding free and fair general elections or halting the ICT-BD trials, the Bangladeshi government, with the cooperation of the international community, needs to work on taking measures that prevent the menace of terrorism from jeopardizing its growing economy and society.