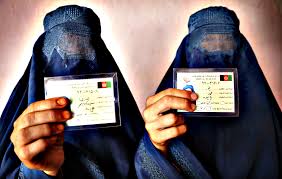 According to official estimates reported by the internal Independent Election Commission (IEC) shortly after the polls closed on June 14, as many as 7 million Afghans, or 60% of the total population, voted in the runoff presidential election. Despite continuous threats from the Taliban warning people to stay away from polling stations, approximately the same number of voters participated in the runoff as did in the first round, which took place on April 5. The IEC noted an increased percentage of female voters in the runoff, with as many as 38% of voters being female. The head of IEC Yusuf Nuristani hailed the large voter turnout as an important step in the rebuilding process for Afghanistan, as this election is set to become the first occasion of democratic passage of power from one elected government to another in the country’s history.

Afghans once again chose between the front-runners Abdullah Abdullah, a 53-year old former foreign minister, who received 45% of the vote in the first round, and Ashraf Ghani Ahmadzai, a 64-year old former finance minister, who received just under 32% in the initial election. The candidates differ mostly in their personalities rather than platforms. Abdullah, whose mother was a Tajik, draws most of his support from this group and is known as the face of anti-Taliban resistance in Afghanistan. He received a ringing endorsement from the former Pakistani Inter-Services Intelligence (ISI) chief Hamid Gul just prior to the June 14 election, drawing criticism from many voters. Ghani, on the other hand, is of Pashtun origin, appealing mostly to the southern and eastern provinces. His opponents have criticised him for living abroad and at one point possessing American citizenship. Despite their differences, both candidates promise to sign the long-delayed security pact with the United States, which would allow 10,000 American troops to remain in Afghanistan for two more years in order to conduct antiterrorist operations and train the Afghan army and police.

Although the official voter turnout was announced at 7 million, observes, voters, and even one of the candidates questioned the large figure. After the polling stations closed, there was a general feeling that voter turn out had fallen short of the first round, so the IEC announcement came as a surprise. Many questioned the accuracy of the official figure, announced two hours after polling stations closed, as election staff from all regions of the country could not have had enough time to report their statistics to the central authority. Voter turnout was predicted to fall in the second round as many people had become disillusioned amid reports of fraud in the first round; the Taliban’s annual spring offensive was also predicted to be an obstacle to voter turnout. One explanation of the increased numbers suggests that more women voted than was expected. Despite this, even Abdullah Abdullah called the figures into question, claiming results could not have been available so soon after closing.

Another concern during the second round was the shortage of ballots at various polling stations throughout Afghanistan. As many as half of the country’s 34 provinces ran out of ballots several hours after opening on election day. The same problem was reported during the first round on April 5 as authorities did not expect a high turnout of voters. Election officials claimed the shortage was a strategic move to prevent election fraud and ballot box stuffing that took place during the 2009 presidential election. The number of available ballots was much higher than the number of voters, leaving numerous ballots blank. To avoid a similar situation fewer copies were printed in this election, although the IEC reported that it had produced 14.8 million ballots, 1.8 million more than the number of eligible voters. Despite the available supplies, numerous polling stations did not receive nearly enough ballots, running out just two hours after opening, while voters had to wait as long as 3 hours to receive extra supplies at other stations.

At the same time, the Taliban stayed true to their promise to attack civilians participating in the election. A roadside bomb killed 11 people, including 4 election workers, and 11 people had their fingers cut off to punish them for voting over the weekend, according to official reports released on Sunday. Additionally, a series of rocket barrages and other scattered attacks that Interior Minister Mohammad Umar Daudzai said killed 47 people, including 20 civilians, took place. Despite these events, the runoff was held amid fewer violent incidents than was expected.

The White House praised the election as “a significant step forward on Afghanistan’s democratic path”. It added, “we look forward to working with the next government chosen by the Afghan people.” U.S. Secretary of State John Kerry praised the people of Afghanistan for “laying the groundwork for the first democratic transition” in their state’s history.

The Cyber Siege of NATO