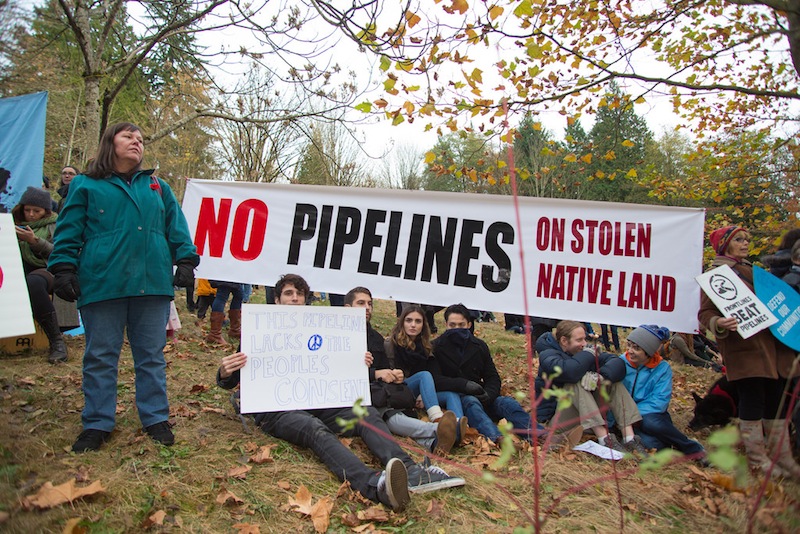 Justin Trudeau approved the Kinder Morgan Trans Mountain Expansion Project and the Line 3 Replacement Project on November 30, 2016. He rejected the Northern Gateway pipeline, stating that it would damage the Great Bear Rainforest in British Columbia and is environmentally more dangerous than the other two. The Kinder Morgan Expansion will continue the oil pipeline from Edmonton, Alberta, to Burnaby, British Columbia and would triple the amount of oil carried to 900,000 barrels per day. The Line 3 Project will replace the 48-year-old pipeline from Hardisty, Alberta to Gretna, Manitoba, and will provide 7,000 new jobs for construction. While planning construction, Kinder Morgan consulted with 120 Indigenous committees in order to gain support for the plan and avoid further confrontation.

This proved to be a divisive issue for Canadians. Many support Trudeau as it would be an economic boon for the country, but many environmentalists and Indigenous leaders are promising legal and communal action against the pipelines. With the Standing Rock protests in the United States that oppose the Dakota Access Pipeline, would protesters rally with Canadian Indigenous leaders and hold similar protests?

The company Energy Transfer started construction of The Dakota Access Pipeline in 2014. The company states that the project would transfer domestically produced oil from North Dakota to major markets throughout the line, all the way to Illinois. It claims that 8000 to 12,000 jobs will be created during construction, and the increased production of oil will increase local development and economic gain for the nation. It was completing construction in North Dakota, until a spark of protests, stemming from the Standing Rock Sioux Tribe, stalled the project.

The Tribe, located in North Dakota, formed protests against the project as the route traverses their lands, for two main reasons: that they object are environmental pollution and loss of cultural land. It argues that if the pipeline were to burst, it would create irreparable damage to the Missouri River, its main water source. The Tribe sued the Army Corps of Engineers in August for continuing the construction of the pipeline despite increasing protests. Many Americans travelled to the area to support the Tribe, including veterans, environmentalists and other Indigenous peoples, naming themselves ‘water protectors.’ Protesters violently clashed with police officers, and many protesters were injured from water cannons and tear gas. A victory came when the Army Corps denied the permit for Energy Travel to drill under the Missouri River this month, but the fight continues as leaders recognize that the decision can be appealed after Barack Obama steps down as president.

In Canada, Not a Unified Front but Still Strong

While there have been many protests from Ottawa to British Columbia regarding the pipeline projects, several Indigenous leaders support the decision. For example, the Huu-ay-aht First Nations supported the pipeline through an editorial in the Globe and Mail, stating that Trudeau has recognized the balance between environmental protecting and economic expansion. In addition, at least thirty-nine Indigenous communities had signed agreements with Kinder Morgan before the Trudeau government approved the project. British Columbia’s leading chief Shane Gottfriedson voiced moderate support for the pipeline, and stated that he wants to avoid ‘another North Dakota pipeline incident.’

Nevertheless, many organizations are dissatisfied with the decision, including sixty-one First Nations communities, members of parliament from various parties, and environmentalist groups. The project faces intense opposition from some Indigenous groups in Canada and the United States who signed a treaty in September in defense against the development of the Alberta oil sands and the distribution of their oil. The treaty includes the Trans Mountain and the Line 3 Project. The province of British Columbia has been loudest with its disapproval, with Liberal MPs headlining the demonstrations in Vancouver and Burnaby Mountain. Their concerns are for the environment and First Nations rights in the provinces being subordinated to economic gain, and politicians and activists alike are vowing significant challenges to the projects in the near future.

Photo: “Rally against Kinder Morgan oil pipeline on Burnaby Mountain” (2014), by Mark Klotz via flickr.com. Licensed under CC BY 2.0.