The importance of the Asia Pacific region to the world generally and to Canada specifically is increasing rapidly and has been for some time. Canada’s interests in the region are first and foremost economic, reflected in an array of evolving trade relationships. Among the key links are the Trans-Pacific Partnership (TPP) talks, increasing trade with China, including the signing of a Foreign Investment Protection Agreement (FIPA), and advances on nuclear trade with India. These efforts are designed to ensure legal access to Asia Pacific markets and trade routes for Canadian businesses and consumers. It is equally important to ensure physical access to those routes and markets, and maintain the political relations that underpin international agreements.To do so Canada will have to overcome a history of intermittent presence in the region while at the same time balancing competing American and Chinese demands.

Canadian engagement has been irregular since the 1950s and its most recent foray – CIDA sponsored talks on South China Sea issues – ended in 2001. As a result Canada is not part of key gatherings like the East Asia Summit, ASEAN Defence Minister’s Meeting (ADMM), and ADMM-Plus. 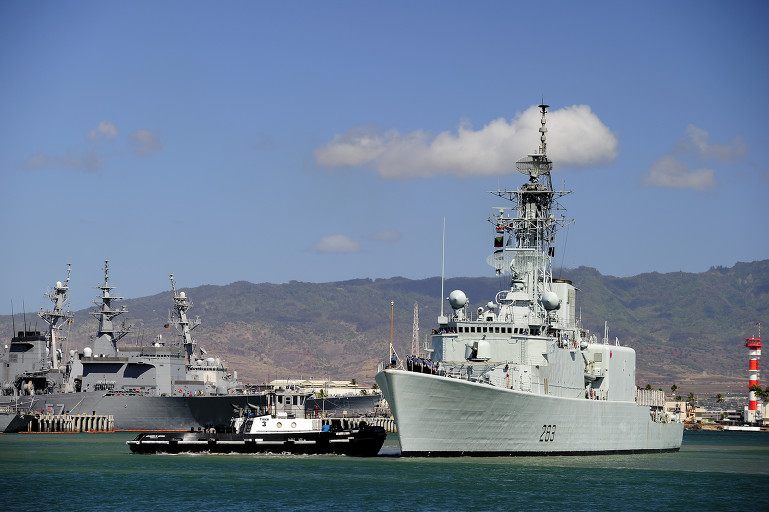 Speaking at the 2013 Shangri-La Dialogue, Minister of National Defence Peter Mackay stated Canada’s desire to become part of such forums and noted their importance in fostering the dialogue and transparency necessary to resolve disputes. He also said that growing links among Pacific states means growing interdependence and emphasized the importance of security architectures and governance mechanisms in fostering the desired dialogue and transparency.

Minister Mackay emphasized transnational security threats like organized crime, migrant smuggling, and proliferation which by their nature require collective action. Canada is already active on these files with the Canadian Forces, RCMP, and Canada Border Services Agency all involved in programmes with ASEAN states, designed to boost their ability to combat illicit activities such as organized crime and terrorist networks.Canada and ASEAN have also issued a joint declaration to combat international terrorism. These efforts are important to the region and to Canada and demonstrate its commitment to Asia Pacific. They should be continued as Canada works to build its presence there.

But when it comes to managing inter-state disputes the landscape is more complex. As I wrote several weeks ago both the US and China are working to organize regional security, in the process confronting regional sovereignty disputes and significant domestic challenges.In this arena the challenge for Canada is to continue building its economic relationship with China without weakening its ties to US-led security structures.

Canada has been a participant in the US-led Rim of the Pacific (RIMPAC) exercise since its inception and Canadian officers held several key posts during the 2012 exercise, the first time non-Americans have had the opportunity to do so. That exercise, though, is looked upon with suspicion by the Chinese, who seem to view RIMPAC as part of an American effort to contain China’s rise. The implication is that alignment with US policies may cast a shadow over efforts to expand trade with China. At the same time, Canada and others face US pressure to take a greater share of the global security burden. To use Brian Stewart’s words, Canada is caught between “Washington’s nagging and Beijing’s displeasure.”

When it comes to maritime security Canada may be able to take on an “honest broker” role; its sponsorship of the South China Sea Dialogues in the 1990s demonstrated its ability to act as a neutral party. As James Manicom notes, the current climate is such that similar talks might not be feasible, but Canada can seek to engage on maritime security, including with China. According to Elinor Sloan there is “much scope” for Canada-China cooperation on maintaining access to regional trade routes, countering threats like terrorism, proliferation of weapons of mass destruction, and human, drug, and conventional weapons trafficking. These activities would mesh well with existing Canadian anti-Crime, counter-terrorism, and counter-proliferation commitments, making for an easier transition.

In the (unlikely) event of inter-state regional conflict Canada would undoubtedly side with the United States. But that does not mean that at present Canada cannot engage with all regional powers and potentially act as a go-between on some issues. In fact, doing so would help to reduce tensions and the likelihood of current disputes and competition escalating to un-manageable levels. As a trade dependent middle power, Canada can hope to do little more.