Decades later, there is a lingering sense that more could have been done to prevent the conflict that unfolded in Yugoslavia in the early 1990s. During this time, the primary international institution that shouldered the task of maintaining the peace in Bosnia and Croatia from 1992-1995 was the United Nations. It did so through its UNPROFOR mandate, a role for which it soon came under heavy scrutiny.

The United Nations Protected Areas In Croatia (Click To Enlarge).

Much of the UN’s inability to act decisively and manage the conflict can be ascribed to good intentions not matching up to the harsh reality on the ground. The one over-arching principle throughout the war in Bosnia (1992-1995) was that the UN would focus exclusively on negotiations and use military force as a last resort, the latter signalling desperation and a failure of diplomacy. The method used to achieve this was a campaign of intense diplomacy, backed by limited and defensively oriented military operations, designed to broker a stable peace. It also meant not antagonizing the warring parties, so as to prevent an escalation of violence.

In practice, the mandate required the UN to carry out peacekeeping while maintaining impartiality towards the combatants, a mission which it quickly found overwhelming. Classic peacekeeping operations looked promising when an UN-brokered cease-fire between Croatia and Serbia went into effect in early 1992, creating a number of United Nations Protected Areas (UNPAs). However, this strategy quickly soured in the case of Bosnia, where no side would formally agree to a peace settlement until the November 1995 signing of the Dayton Agreement.

One Mandate, Many Problems

All the while, the UN was trapped in a dilemma: it was reluctant to allow direct offensive measures (such as air strikes) against aggressors, since it believed that antagonizing any one side harmed the chances of negotiating a peace deal. At the same time no peace deal could realistically be reached until a stalemate occurred, or one of the parties was annihilated, neither of which could be accomplished without direct military force in the region.

British Army General (Ret’d) Sir Michael Rose, who commanded UNPROFOR during the war, has argued that that the mandate thus meant that while the UN was never indifferent to the plight of Bosnia, it had to mediate impartially between the two sides if it be successful in bringing them together in a negotiated settlement. This decision to avoid deepening intervention was buttressed by international legal principles which hold that other sovereign actors cannot regulate a state’s right to self-determination, even if it might result in civil war. A co-principle of such thought is that states are not to interfere in other state conflicts unless they represent a significant threat to international stability.

By extension, these principles were taken to mean that peacekeepers are only to be used as a deterrent, not engage in combat or lend an advantage to a particular side in its struggle for power. And as General Rose has likewise claimed, had it used too much force or confused peacekeeping with war-fighting, UNPROFOR would have been regarded as a combatant by the Serbs who at the time controlled 70% of the territory in Bosnia. In these circumstances, he believes it would have been impossible for peacekeepers to continue the mission. 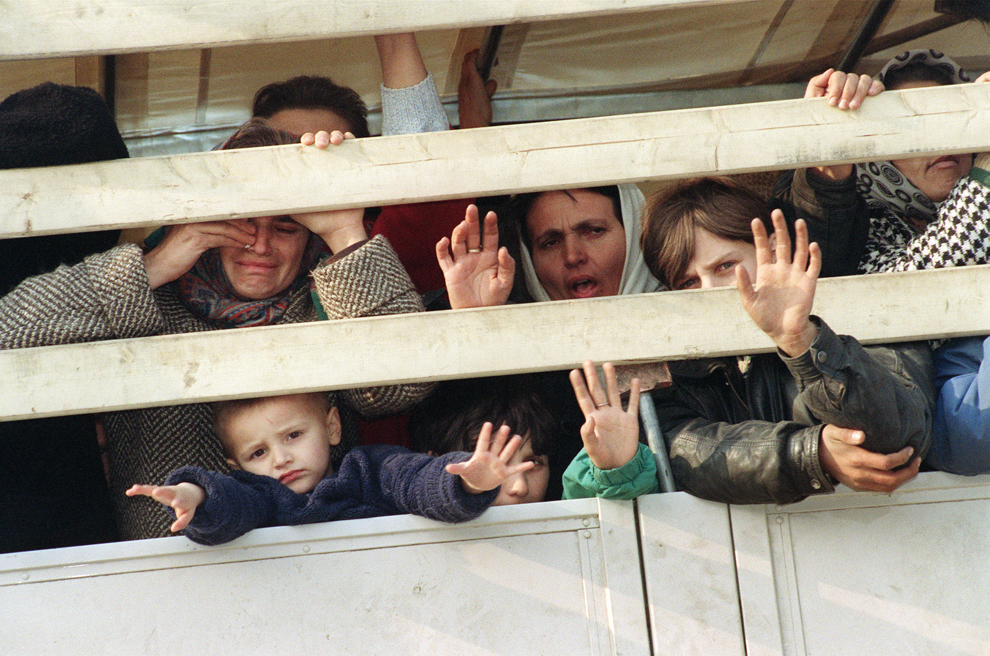 March 31, 1993, Muslim refugees ride a United Nations truck in a UN convoy as they flee the Serb-besieged Bosnian enclave of Srebrenica for Tuzla. (Pascal Guyot/AFP/Getty Images).

Many have considered the UN’s refusal to use force as a legacy of Cold War policies. It focused on avoiding provocation and aggressive military posturing, and in the end, proved to be ill-matched for the new geopolitical environment. As Canadian Army Major-General (Ret’d) Lewis MacKenzie has observed, for 36 years the pattern of intervention remained reasonably consistent. In essence, it revolved around peacekeeping, not peacemaking. With no real peace to keep, the UN could only fall back on its policy of impartiality.

Throughout the conflict, the international community alternated between treating the war first as an internal, then as an international conflict. When Resolution 713 was passed in September 1991, no UN Security Council member had yet officially recognized the national aspirations of any states within the Former Yugoslavia. Many have argued that support for the principle that neither internal nor external borders could be changed by force was the hallmark of the policy of the international community.Even Germany, who officially recognized a sovereign Croatia by late 1991, had by this point suggested that only its right of self-determination should be recognized. And once passed, the resolution could not be amended. Although the United States eventually recanted on Resolution 713, the other four members of the Permanent Five did not feel it was politically wise to follow suit. Again, they feared that their peacekeeping troops would be put at risk or could face the prospect of a widening war.

The disaster in Bosnia was not so much a failure of individual actors, as it was a failure of the international community. The efforts to secure a peace from the very beginning of the war were constantly undermined by political interests on all sides. In such an environment it was impossible to achieve peace without a policy of direct intervention. The events on the ground were also unfavourable to the UN mission from the start, as UNPROFOR was a constabulary force, not a combat-ready army.

Secondly, the UN pursued a diplomatic peace solution, meaning that it could not justify the escalation of war by allowing arms to enter the country, or allowing air strikes. Lastly, its belief that it needed to remain impartial if it wished to create peace required the UN to adopt a moral stance that was at odds with the aggressors.

On all three points the UN attempted to pursue a highly moralistic policy that, in the end, it could not achieve because of political machination on the part of the former Yugoslav states, as well as foreign governments who pursued their own domestic agendas. As an organization that depends entirely on international goodwill and support, how can it act effectively if member states decide that national interests take precedence over international goodwill?

For this reason, David Rieff says that it was odd to hear the best people in UNPROFOR and the Department of Peacekeeping Operations sincerely maintaining in one breath that they had done a good job while in the next conceding that the whole situation in Bosnia was turning into a complete disaster. Rieff is right in concluding from this that the great powers could have given the UN a different mandate had they chosen to do so. In this case, the UN implemented the disgrace but did not create it. Finding itself embroiled in a conflict in which it operated with one hand tied behind its back, under fire from all sides, the UN did as much as it could during the conflict. Bosnia is a sobering reminder that the moral responsibility of peacekeeping must somehow be reconciled with the aggressive nature of the participants and the domestic needs of its contributing countries.

This article has been reprinted with permission of SITREP, the journal of analysis and opinion of the Royal Canadian Military Institute (March-April ’12 issue). It has been edited and condensed from its original version.

Pavle Levkovic was a European & Canadian Security Analyst at the NATO Association of Canada focusing on South Europe and Transatlantic security. He graduated with an MA in Linguistics from the University of Toronto, where he also studied Political Science. For the past nine years he has been serving with the Canadian Forces Reserves in Toronto. View all posts by Pavle Levkovic →