Disclaimer: The views expressed do not necessarily represent those of NATO or the NATO Defense College. The programme can be found here.

I would say that I think the verdict’s still out. The Ukraine crisis has caused a bit of a dilemma, I would suggest, for Canada’s Arctic policy.  As you know Ottawa has taken a very hard line on Russia in the European context—in the context of Ukraine—and has been very vocal about the need for NATO resolve in the face of Russia’s hybrid aggression there. However, in the Arctic Ottawa has wished to keep NATO largely out of the equation where it says Canada and the other circumpolar states including Russia will resolve any disputes peacefully and in an orderly fashion.  But I would suggest events in Crimea have drawn into question this basic assumption for the first time.  Iceland’s Prime Minister is on record as being concerned about similar Russian tactics perhaps one day surfacing in the High North.  And during his recent visit to the Arctic, Prime Minister Harper also cautioned against complacency regarding Russian militarization there.  Whether that will extend to NATO engagement in the region or a deterioration of congeniality in the Arctic Council on non-military matters, I think it is too early to tell.  However, I do believe that as minimum the Alliance should be more vigilant regarding the High North.  For instance, one of the circumpolar Allies could act as a contact country for NATO, routinely briefing fellow member states on security developments in the High North.   The Alliance does that in other areas of the world.  Take the African Union for instance; Norway is the contact mission for the Alliance in Addis Ababa.   There’s no reason that Canada or Denmark, for instance, could not take on a similar leadership role for Alliance in the High North, saying to fellow Allies: “we will be your consultative lead when it comes to the issues of Arctic security”. That’s short of saying  deployment of NATO assets there, but as a minimum just to have increased vigilance and consultation, which the Norwegians have be advocating as of late.

ii) Harper himself has been quoted as warning NATO that it has “no role” in the Arctic and that pressure for involvement was coming from nations who wanted to exert their influence in a region “where they don’t belong”. What, according to you, is NATO’s role in the Arctic? 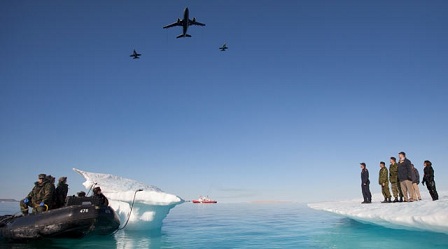 iii) Given the growing Russian military presence in the Arctic, in the future, would the Arctic Council’s mandate grow to include military security issues? In what ways would leveraging NATO’s existing infrastructure be beneficial?

I’m highly skeptical. Again, the Arctic Council is focused on sustainable development governance, and it’s very good at that. But it is not a repository of military expertise.  Even if some countries wished the Council’s mandate to include issues of military security, I am doubtful that the current political climate would be conducive to realizing this.  Events in Crimea have fundamentally changed the relationship between Putin’s Russia and the West when it comes to security policy. What I do hope you’ll see, however, as I’ve already pointed out, is a push for greater vigilance and consultation collectively among the 28 Allies, within existing NATO structures, when it comes to issues of the High North security.

iv) Russian general Nikolai Makarov has already stated that Finland’s NATO membership would constitute a direct threat to Russia. If Finland and/or Sweden do decide to seek full NATO membership, Russia could see this as an effort by NATO to encircle it in the Arctic. Is Canada likely to support a Swedish and/or Finnish application to NATO?

Well, I think you first have to ask the question as to what are the prospects for that? Even though there are great security concerns now in Helsinki and Stockholm vis-à-vis what’s happened in Crimea, I don’t think they have yet reached the point where there is the national consensus to apply for  NATO membership. If one day they do, however, it is not for the Kremlin to decide whether membership is granted or not.  NATO, with Canada’s full support, retains an open door policy for aspirant European democracies.

v) Anything else to say to the readers back home?

I think that I would just say that greater collective vigilance and engagement by the Alliance vis-à-vis the High North should not be seen as a threat to Canadian sovereignty and interests there. On the contrary, it should be seen as an enhancement and a real opportunity for Canada to take the lead on a policy area of interest to Allies.  In other words, why shouldn’t Ottawa step up to the plate and take the initiative saying: “Okay, fellow NATO Allies, we’re a key circumpolar state, we’re going to be your eyes and ears there, and consult you regularly on what’s transpiring in this part of the world which is very important to us.”

Is The Nuclear Security Summit An Effective Forum For Addressing The Threat Of Nuclear Terrorism?

Is the Nuclear Security Summit a mere talking shop or a worthy initiative that’s making a difference? Our program editors weigh in.

Foreign Policy and Procurement: Two Sides of the Same Coin

Analyzing the Future of Canadian Aid

If Canadians want to consider themselves leaders in global development, they’ll have to reexamine their aid policies. Steven Rai explains.